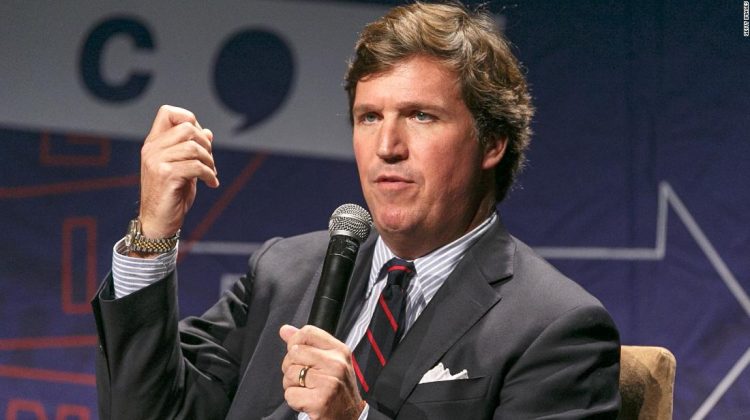 The haywire theory originated from an article published Monday by Revolver News, a right-wing website. From there, it was picked up by Fox News host Tucker Carlson, who used his opening segment on Tuesday night to slam the FBI, saying it played a role in the January 6 attack.

Several Republican lawmakers quickly piled on. They entered the article into the congressional record, tweeted about the Fox News segment, condemned the FBI agents who supposedly “organized and participated” in the Capitol attack, and demanded answers from the FBI director.

But here’s the problem: The underlying article was nothing more than a conspiratorial web of unproven claims, half-truths and inaccurate drivel about perceived bombshells in court filings.

Legal experts laughed off Carlson’s convoluted breakdown of how court documents supposedly revealed that “FBI operatives were organizing the attack.” Twitter even fact-checked Carlson’s comments on Wednesday afternoon, calling them a “baseless suggestion.” But the right-wing disinformation echo-chamber was already at full blast, and the false flag theory went viral.
These theories are just the latest example of right-wing figures deflecting responsibility for the deadly Capitol riot away from former President Donald Trump and his supporters. Many GOP officials and conservative outlets have promoted false theories that the attack was instigated by Democrats, supporters of Black Lives Matter, or members of the far-left Antifa movement.

Revolver News published its story on Monday. The article fit the site’s bent toward conservative clickbait — their homepage Wednesday featured alleged horror stories from people who took the Covid-19 vaccine, and also said First Lady Jill Biden spoke to her husband in a “b*tchily” fashion.

Here’s the crux of the conspiracy: Several indictments against Capitol rioters who are accused of planning the attack with extremist groups include references to unindicted co-conspirators. The article claimed these co-conspirators could actually be FBI informants or undercover agents who infiltrated the groups, played a leading role in planning the attack, and stormed the Capitol.

It’s true that some indictments against members of extremist groups like the Oath Keepers and Proud Boys mention anonymous co-conspirators who haven’t been charged yet. And the FBI routinely uses undercover agents, and government operatives may have been embedded in right-wing groups before January 6.

But there is no evidence that these co-conspirators are secretly working for the FBI. An FBI spokesperson declined to comment about the false-flag theory. Legal experts say the article’s conclusions are based on a deeply flawed misunderstanding of how legal writing works and the definition of an unindicted co-conspirator.

The Justice Department’s internal manual explains when and how unindicted co-conspirators should be mentioned in court filings. The manual doesn’t say these anonymized terms like “PERSON ONE” should be used to refer to FBI agents. And in Capitol riot cases where there were informants who helped prosecutors, they were clearly identified as confidential sources.

The 9,500-word Revolver article, which the site called “seismic exposé,” was carefully hedged. Many of the claims were posed as questions. Others were preceded by caveats like, “if it turns out that…”

But many people who picked up the story ignored these guardrails as they amplified the allegations.

The story found a home on Fox News, whose hosts and guests pushed false voter fraud claims after the 2020 election, downplayed the Capitol insurrection, and defended the rioters. Carlson has done this on his show, which often attracts the largest audience in cable news. Tuesday’s program about the false flag theory averaged about 3 million viewers, per Nielsen ratings.
Carlson devoted more than 12 minutes of the show to discussing the Revolver News story and other misleading claims about the January 6 insurrection. He also interviewed the website’s editor Darren Beattie, a Trump White House speechwriter who left in 2018 after attending a conference frequented by White nationalists.

“FBI operatives were organizing the attack on the Capitol on January 6,” Carlson said without evidence. “… It turns out that this ‘white supremacist insurrection’ was — again, by the government’s own admission in these documents — was organized at least in part by government agents.”

He later claimed there were “FBI operatives that rioted on January 6.” The on-screen graphic for part of the segment read, “LAW ENFORCEMENT OFFICERS PARTICIPATED IN JAN 6.”

Over and over, Carlson went farther than the original article with his direct and explicit claims against the FBI.

Garber said that there are legitimate questions to ask about law enforcement activities before the attack, including whether any FBI operatives infiltrated the groups that breached the Capitol.

“But the designation of unindicted co-conspirators has nothing to do with that,” Garber said.

“In fact, prosecutors use those generic labels for a variety of reasons, most commonly to refer to people who participated in the conspiracy but have not yet been publicly charged,” Honig said.

One case that Carlson highlighted involves Thomas Caldwell, an alleged participant in the Oath Keepers conspiracy. He has pleaded not guilty to four crimes tied to the insurrection. Carlson noted that an unindicted co-conspirator called “Person Two” is mentioned in Caldwell’s indictment, and that Person Two allegedly planned logistics and breached Capitol barricades.

“The government knows who they are, but the government has not charged them,” Carlson said. “Why is that? You know why. They were almost certainly working for the FBI.”

Prosecutors said Caldwell stayed with “Person Two” at a hotel in northern Virginia before the insurrection. His attorneys said in court filings he was only accompanied by his wife during the trip. Text messages from another defendant also indicate that Caldwell lives with “Person Two” at his home in rural Virginia, and Caldwell’s lawyers have said he lives with his wife on a farm.

“Essentially all of Carlson’s legal assertions and assumptions are wrong,” Honig said.

The Fox News segment was an instant hit with some Republican lawmakers and right-wing influencers.

Rep. Matt Gaetz, the firebrand Florida Republican who is under FBI investigation over sex trafficking allegations he denies, tweeted a clip from Carlson’s show to his 1.3 million followers and declaring that “FBI operatives … organized and participated in” the riot. He followed that up by sending a letter to FBI Director Chris Wray asking how many FBI agents were at the Capitol during the siege.
Rep. Marjorie Taylor Greene, the Georgia Republican who has promoted conspiracy theories about everything from 9/11 to QAnon, re-tweeted Gaetz and suggested the “deep state” was involved.
At a House oversight hearing Tuesday about the Capitol riot, Rep. Paul Gosar entered the Revolver News article into the congressional record and said it contained information about “infiltration and incitement of the January 6 protest by federal officials.” Gosar, an Arizona Republican, supported efforts to overturn the 2020 election and said the Capitol rioters were “patriots.”

Other right-wing figures hopped on the bandwagon, including personalities with big followings that routinely push “deep state” lies and dominate the disinformation echo-chamber.

Beattie, the Revolver News editor, promoted the story on Steve Bannon’s “War Room” podcast, and suggested that it exposed “a giant entrapment scheme by the federal government.”
Conservative activist Candace Owens tweeted the story to her 2.7 million followers and also suggested that the Justice Department was responsible for planting the pipe bombs that were found at the Democratic and Republican Party headquarters’ shortly before the Capitol riot. Fox News host and right-wing provocateur Dan Bongino covered the story on his podcast as well.

Despite all the attention, there is no evidence that the false flag theory has any credence.