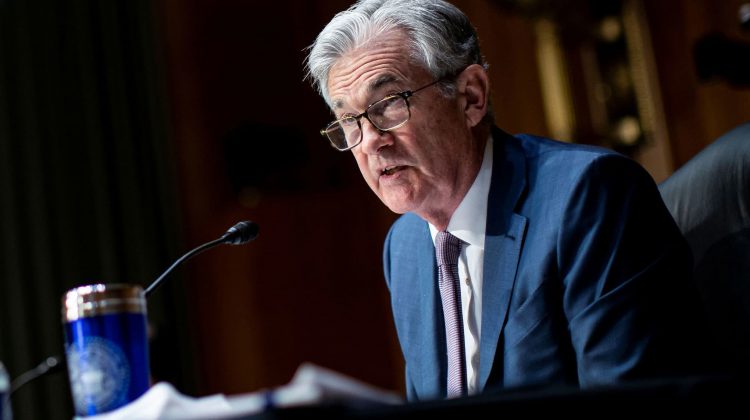 The Federal Reserve unleashed a huge repositioning in global financial markets, as investors reacted to a world where the U.S. central bank is no longer guaranteeing that its policies will only be dovish – or easy.

The dollar surged the most in a year over a two-day period against a basket of currencies.

Stocks were mixed around the world on Thursday, as were bond markets. Many commodities sold off. The Nasdaq Composite was higher, while the S&P 500 and Dow slid. Tech gained and cyclical stocks fell.

The central bank delivered a strong message Wednesday when Fed Chairman Jerome Powell said officials have discussed tapering bond buying and would at some point decide to begin the process of slowing the purchases. At the same time, Fed officials added two rate hikes to their 2023 forecast, where there were none before.

“It’s the end of peak dovishness,” said Peter Boockvar, chief investment officer at Bleakley Global Advisors. “It’s not going hawkish. It’s just we’re past peak dovishness. This market response is as if they were already tapering.”

Strategists say the the Fed’s slight step toward tightening policy didn’t shock markets Wednesday, but it will likely make them volatile going forward. The Fed, in essence, is acknowledging the door is now open to future rate hikes.

It is expected to make a fuller declaration about the bond program later this year, and then within several months start the slow process of bringing $120 billion a month in purchases down to zero.

The yields of shorter-duration Treasurys, like the 2-year note, rose, while longer duration yields, such as the benchmark 10-year fell. That so-called “flattening” is a go-to trade when interest rates rise. The logic is that longer yields fall since the economy may not do as well in the future with higher interest rates, and short-end yields rise to reflect expectations of the Fed raising rates.

U.S. longer-dated Treasurys, like the 10-year, have been lower than many strategists had expected lately. In part, that’s because they are highly attractive to foreign buyers due to negative rates in other parts of the world and liquidity in the U.S. markets. The 10-year yield shot to 1.59% after the Fed news, but was back down at 1.5% Thursday afternoon. Yields move opposite price.

Commodities-related stocks, like energy names and materials shares, were down sharply Thursday afternoon. Of the S&P 500’s major sectors, energy was the worst performing, down 3.5%, and materials were off about 2.2%.

“It’s a massive flattening of the yield curve. It’s an interest rate trade, and it’s the belief the Fed is going to slow growth,” said Boockvar. “So sell commodities, sell cyclicals… and in a slow growing economy people want to buy growth. It’s all happening in two days. It’s just a lot of rewinds.”

Boockvar said the curve flattening has been happening swiftly, too. For instance, the spread between the 5-year yield and 30-year bond yield quickly compressed, moving from 140 basis points to 118 basis points within two days.

“You’re watching an incredible unwind of positioning in the bond market. I don’t think people thought the Fed would do it,” said Rick Rieder, CIO global fixed income at BlackRock.

“We thought the flattening trade was the right move when we saw some of the news out of the Fed. That was something we jumped on pretty quickly. I have to say we’re letting some Treasurys go into this rally,” Rieder said on CNBC.

For stock investors, the shift in cyclical stocks goes against a trade that has been popular as the economy reopened. Financial stocks fell on the flatter yield curve, but REITs were slightly higher. Technology stocks were up 1.2%, and health care gained 0.8%.

“The implication is higher stock market volatility, which I think we’re going to have and going to continue to have,” said Julian Emanuel, head of equity and derivatives strategy at BTIG. “Yesterday changed things. This whole idea of data dependency – the market is going to trade it like crazy, particularly given the fact that the public participation remains very elevated and the stocks the public is most interested in are high multiple growth stocks that have been leading the last several weeks as the bond market remained range bound.”

Even as Powell acknowledged inflation was higher than the Fed expected, the central bank also pressed its message that inflationary pressures could be temporary. The Fed’s boosted its forecast for core inflation to 3% for this year but was at just 2.1% for next year, in its latest projections. Powell used the example of the rise and fall of lumber prices to illustrate his view that inflation will not be long lasting.

But Emanuel said it will be difficult to tell whether inflation is fleeting or not, and the economy’s emergence from the pandemic has been difficult to predict. “Whether it’s the Fed or paid economists on the sell side, or paid economists on the buy side, the ability to measure what’s going on in the economy is really nothing more than…educated guess work at this point because the statistics are just all over the place,” said Emanuel, adding inflation readings have all been hotter than expected.

The late July Fed meeting now looms large, and that could add even more volatility as investors wait to see if the Fed will provide more details on tapering after that meeting. Many economists expect the Fed to use its annual Jackson Hole symposium in late August as a forum to lay out its plan for the bond program.

The bond purchases, or quantitative easing, were begun as the economy shut down last year as a way to provide liquidity to markets. The Fed purchases $80 billion in Treasurys and $40 billion in mortgage securities each month. Rieder expects the Fed could slow purchases by $20 billion a month once it starts the tapering. Once the Fed gets to zero, it could then consider when to raise interest rates.

The market expectations for rate hikes have moved forward, and the euro dollar futures market now sees four rate hikes by the end of 2023, according to Marc Chandler of Bannockburn Global Forex. Prior to the Fed’s announcement Wednesday, futures showed expectations for about 2.5 rate hikes.

Strategist expect some of the Fed reaction is just temporary, and reflects investors who were too far offsides in some positions. “I’m still a commodities bull,” said Boockvar. Commodities had already begun falling ahead of the Fed announcement, after China announced plans to release metals reserves.

“The Fed needed to reign in the inflation story. They did it only very very slightly, but at least they accomplished it, and they’ve squeezed out inflation expectations and they’ve seen a pullback,” he said. “The question is can they through. To raise rates in two years or baby step tapering is not going to do it, but at least for two days they’ve succeeded in calming things down.”