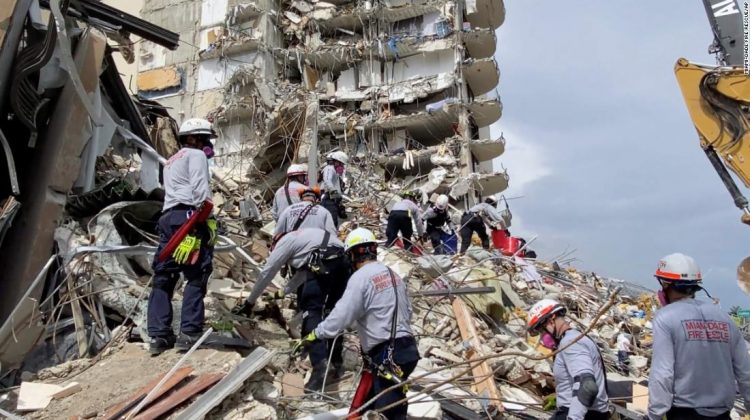 A structural field survey report completed nearly three years before the collapse of the Champlain Towers south condominium complex in Surfside raised concerns about structural damage to the concrete slab below the pool deck and “cracking and spalling” located in the parking garage.

The report from October 2018 was included in a series of public records documents that were published overnight on the Surfside, Florida town website.  The New York Times was the first media outlet to publish a story about the field survey report.

Page seven of the report, the goal of which was to “understand and document the extent of structural issues that require(d) repair and/or remediation in the immediate and near future,” detailed signs of “distress/fatigue” in the parking garage:

“Abundant cracking and spalling of various degrees was observed in the concrete columns, beams and walls. Several sizeable spalls were noted in both the topside of the entrance drive ramp and underside of the pool/ entrance drive/ planter slabs, which included instances with exposed, deteriorating rebar. Though some of this damage is minor, most of the concrete deterioration needs to be repaired in a timely fashion.”

The 2018 report also noted that “many of the previous garage concrete repairs” were “failing.”

The report also said the waterproofing below the pool deck was failing and causing “major structural damage.”

It further noted that “the replacement of the existing deck waterproofing will be extremely expensive…be disruptive and create a major disturbance to the occupants of this condominium building.”

An attorney for the building’s condominium association, Kenneth Direktor, warned against early speculation. The building, he told CNN on Friday, had been subject to a series of inspections “over the last several months” as part of its milestone 40-year safety certification process.

CNN reached out to Kenneth Direktor on Saturday for comment.