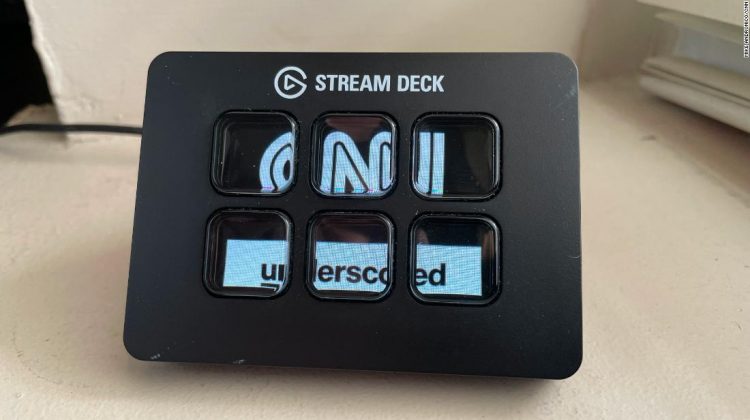 I’ve been broadcasting on Twitch for about two years now using all kinds of different gear, and no single gadget has elevated my streaming game quite like the $80 Elgato Stream Deck Mini. This keypad features six LCD buttons that can be customized to do just about anything on your PC. As a result, I can produce an entire live show with a few easy taps, making streaming that much easier — and a lot more fun.

If you’re thinking about getting into Twitch, YouTube, podcasting or really any type of content creation, the Stream Deck (which comes in several variations) is a must-have. And even if you’re not, this accessory can be programmed to perform all kinds of tasks that can make it easier to get work done or control your favorite Spotify playlists.

Here’s why the Stream Deck Mini has become the centerpiece of my Twitch setup, and why it deserves a place on just about any creator’s desk.

Essentially a small black box with six LED buttons on it (larger variations have more keys), the Stream Deck Mini is pretty unassuming at first glance. But once you get the hang of it, this tiny gadget unlocks some serious superpowers for managing your Twitch or YouTube streams — or just controlling your computer.

The Stream Deck can be customized via the free Stream Deck app for Windows and Mac, which syncs up to popular streaming apps like Open Broadcasting Software (OBS) and XSplit to let you easily run a broadcast without even touching your mouse or keyboard. For example, I currently have dedicated buttons for going live, activating different gameplay and camera scenes and turning on my “be right back” screen once it’s time to take a break. This lets me create smooth transitions between, say, talking to my viewers in a close-up camera shot and showing off some Halo action in a gameplay scene, all without making my viewers watch me visibly and awkwardly click around my streaming software to make the switch.

That’s how I normally use Stream Deck, but it only scratches the surface of what this thing can do. You can program Stream Deck buttons to send out a Tweet, which is perfect for promoting your stream at the touch of a button. You can also set keys to open any app or website on command — something I’ve utilized often to open up OBS with a quick tap and get to streaming faster.

The Stream Deck gets even more powerful once you install one of the many free plug-ins that are available for it, including tools that let you control Spotify or even navigate Windows right from the keypad. The Spotify plug-in turned my Stream Deck into a musical control center, allowing me to play, pause, skip and like tracks (this is handy for folks without media controls on their computer). Meanwhile, the Windows Tools plug-in lets me lock my PC with a single button, or see how long my computer has been on for right on the LED display.

Once you’ve decided what you want the Stream Deck to do, you’ve got near-endless options for customizing the look of each LCD key to your liking. There are a ton of built-in and downloadable icon sets meant to accompany common functions like going live, hitting record, activating music and sending Tweets, including some snazzy animated ones. You can also upload your own icons — such as the one I have of my dog for the button that activates her dedicated webcam feed.

The Stream Deck is especially a no-brainer if you use other Elgato gadgets, such as the Key Light or our favorite streaming microphone in the Wave: 3. The Wave: 3 already makes it easy to manage multiple audio sources at once via the Wave Link app, but when you’re using it in tandem with a Stream Deck, you can access all of those controls with a few button taps rather than having to click around within the app.

And if you have an Elgato Key Light or Ring Light connected, you can use the Stream Deck to adjust brightness and color settings on the fly in case you’re looking too dark or blown out for your viewers. The Stream Deck also works with a variety of third-party gadgets, with plug-ins that let you control your Philips Hue or Nanoleaf lights — perfect for putting on a cool light show for your viewers on the fly.

Assigning all of these commands means that your Stream Deck buttons will fill up fast, especially if you’re using the six-key Mini like I am. Fortunately, you can create as many profiles as you like within the Stream Deck app, each with their own unique functions assigned to each button. For example, I normally use my main streaming profile, but I also have profiles dedicated to controlling Spotify and my Wave: 3 microphone. You can even assign these profiles to automatically activate when you launch a specific app.

Adding to the Stream Deck’s value is the fact that there’s an entire creator community around it, with folks constantly sharing their own profiles and visuals that you can install and use for yourself. There are icon packs available within the companion app inspired by the likes of Assassin’s Creed, Apex Legends and Superman, which will give your Stream Deck some extra-geeky flair. And if you’re in search of optimal profiles for streaming or gaming, there are people sharing all kinds of custom layouts on Reddit.

If there’s one issue I’ve had with my Stream Deck Mini after nearly two years of use, it’s that I simply wish I had more keys. I’ve been able to get around the Mini’s modest six-button layout by making use of folders, profiles and multi-action keys, but it still feels limiting enough to make me consider an upgrade to the Stream Deck ($149.99) or Stream Deck XL ($249.99). And if you plan on doing a lot of content creation, you might want to consider investing in one of the higher-end models

The standard Stream Deck gets you 15 LCD keys, while the high-end Stream Deck XL packs a total of 32 buttons. They all function exactly the same — it just depends on how serious you are about your broadcasting game, and how many controls you’d like at your fingertips at once. It’s also worth noting that you can use multiple Stream Decks at once, in case you’re an existing Stream Deck owner looking to expand. The Stream Deck software can recognize multiple decks at once, and you can easily copy functions from one Stream Deck to another.

Don’t feel like buying a Stream Deck? You can just turn your phone into one instead. The Stream Deck Mobile app for iOS and Android gives you all of the same functionality as the standard Stream Deck, with 15 virtual keys that you can program to control your PC and streaming setup however you see fit. I’ve been pretty impressed with the mobile experience — switching scenes in OBS felt nearly as responsive as doing so on my Mini, and there’s some nice haptic feedback to simulate the feel of using a physical Stream Deck. The app is subscription based at $2.99 per month or $24.99 for a year and offers a free trial, making it a great way to try out the Stream Deck experience before splurging for one of the physical decks.

As a hobbyist Twitch streamer, I consider the Elgato Stream Deck Mini to be one of the best things I’ve ever bought for my PC setup. This tool gives me the ability to go live, switch scenes and start an intermission all at the push of a button, all of which make me feel like I’m actually producing a live show rather than fumbling around an app with my mouse. And as I dig deeper into the many plug-ins and fan-made profiles available for Stream Deck devices, I’m discovering just how useful it is as an all-purpose tool for controlling your computer.

If you do any kind of content creation and are interested in the Stream Deck, I’d strongly suggest investing in the $149, 15-key model if you can. You’ll run out of space fast on the Mini, though you can make smart use of folders and multiple profiles to get the most out of its six-key layout. And if you’re not sure whether the Stream Deck is for you, the mobile app is a good way to try out its functionality for free.

Regardless of which option you choose, if you’re someone who spends their days showing off their Call of Duty skills, putting on virtual concerts or hosting live podcasts, the Stream Deck absolutely belongs in your setup.