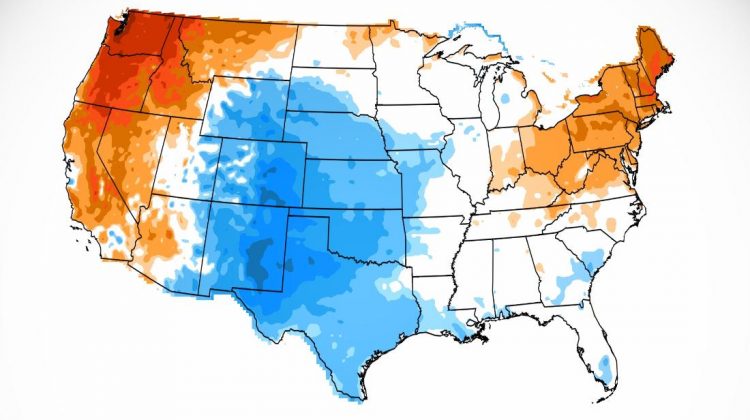 On the other side of the country, high temperatures in the Northeast will climb well into the 90s by the end of the weekend, far above the seasonal averages.

Summertime temperatures in the Pacific Northwest normally sit around a balmy 70 degrees. This weekend, conditions typical of the desert Southwest will bake the region as a heat dome parks itself over Washington and Oregon.

“Excessive heat warnings have been issued for nearly all of Washington and Oregon, as well as much of Idaho and northern California. Heat of this magnitude can be extremely dangerous if proper precautions aren’t taken,” warns the Weather Prediction Center (WPC).

“Nighttime temperatures are only expected to briefly cool into the 70s throughout the lower elevations, which can significantly increase the threat for heat related illnesses,” the WPC said.

As a large ridge of high pressure moves northward over the Northwest this weekend, a heat dome has formed, essentially acting as an oven to bake the region for an extended period of time.

Hot air rises, but the high pressure acts as an atmospheric lid — forcing the hot air back to the surface where it is heated even further.

“Imagine a swimming pool when the heater is turned on — temperatures rise quickly in the areas surrounding the heater jets, while the rest of the pool takes longer to warm up,” the National Oceanic and Atmospheric Administration (NOAA) says.

The circulations within the heat dome allow temperatures to increase quickly and within a fairly confined region.

Factoring in the longest days of the year and drought conditions, high temperatures are expected to break records beginning Saturday and lasting through at least the middle of next week, the WPC said.

Residents of large metropolitan areas like Portland and Seattle will be working up a sweat.

The Portland NWS office says the Portland airport will probably record the highest temperature ever for the month of June and could break the all-time high of 107 degrees Fahrenheit.

A high temperature of 103 degrees is forecast for Sunday and Monday at the Seattle-Tacoma airport, where a temperature above 100 has only been recorded twice — in July of 2009 and 1994.

Spokane, Washington, recorded high temperatures at or above 100 degrees for six consecutive days back in July 1928. That was the longest period of temperatures over 100 degrees recorded in the city. But that record may be broken as triple-digit temperatures linger into the beginning of July, the weather service says.

Rural eastern Oregon and Washington will feel the heat wave through the Fourth of July weekend, and eastern Idaho will also swelter.

“Right now, we’re looking at 105-110 in Snake Basin of Idaho and the Treasure Valley. We could be breaking all-time records in Boise on Tuesday and Wednesday of next week.” said NWS Boise Meteorologist Korri Anderson.

NWS Boise is urging people not to become another statistic, as heat-related deaths are the number one cause of weather fatalities.

“According to the CDC, over 600 people die each year from heat. It can happen to you,” NWS Boise warns.

Temps could hit 104 in Canada next week

The heat does not stop at the US’s northern border. Heat warnings are in effect for portions of Canada as well.

Environment Canada, Canada’s governmental source for weather information, has issued heat warnings for most of British Columbia and Alberta that extend all the way to the Arctic Circle.

“An exceptionally strong ridge of high pressure will develop over British Columbia likely resulting in record breaking temperatures,” Environment Canada said. “The duration of this heat wave is concerning as there is little relief at night with elevated overnight temperatures.”

Near the Arctic Circle, in the Fort Good Hope region, temperatures are forecast to approach a sultry 30 degree Celsius (86 degrees Fahrenheit).

Even in mountainous areas in Oregon and Washington, temperatures this weekend could climb into the 90s, creating hazards of a different sort.

People looking to cool off should be aware of dangers posed by lakes and rivers, the NWS said. Cold temperatures in the water can lead to muscle shock, greatly increasing the risk of drowning, NWS Portland Meteorologist Lisa Kriederman said.

Drowning was the second leading cause of unintentional injury death for children aged 1-17 in Washington, according to King County authorities.

The heat wave was already melting snow and ice above 14,000 feet at Mount Rainier National Park on Friday.

“Even higher elevations such as Paradise won’t escape the extreme heat hitting the Pacific Northwest. The rate of melting snow and ice on Mount Rainier’s meadows and upper slopes is already increasing,” the National Park said on Friday afternoon.

Muggy heat for the Atlantic Northeast

Temperatures will ramp up in the Northeast as the weekend comes to a close.

Highs approaching the seasonal records are likely in the start of the week, with the highest temperatures Monday through Wednesday.

“A heat wave appears to develop and persist from the Northeast to the Mid-Atlantic where afternoon temperatures are forecast to peak well into the 90s away from the immediate coasts during next week,” according to the Weather Prediction Center.

Humid conditions will also persist as southwesterly winds pump subtropical moisture into the region. Moist air insulates the area, allowing for heat indices to reach even higher throughout the daytime heating periods.

“This combination of heat and humidity will likely result in days of heat index or apparent temperature values 95 to 100F, which means that a Heat Advisory will likely be needed at some point.” NWS Boston.

Rain chances and afternoon thunderstorm activity will increase into the middle of the week when relief will arrive to subdue the high temperatures.