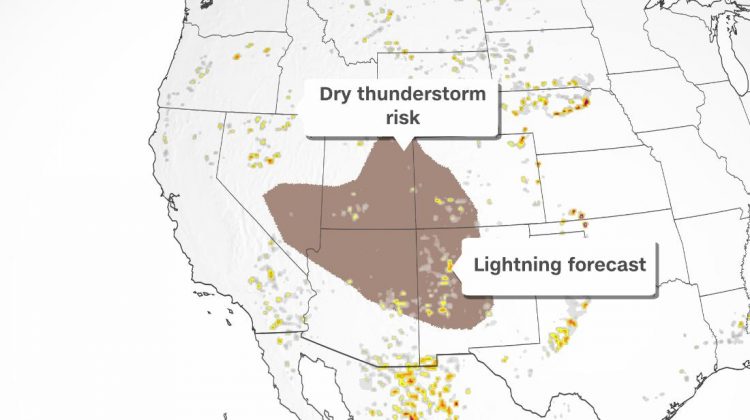 Rather than providing rainfall to stomp out fire growth, these storms can produce frequent cloud-to-ground lightning and gusty outflow winds that pump fuel into existing fires — and spark new ones.

Areas already stricken by drought in Utah and Nevada could see thunderstorms building throughout the day Wednesday, after dry and hot conditions Tuesday.

“Monsoonal moisture will be making its way into Nevada on Wednesday. Right now, there is a concern that there will be isolated to scattered dry lightning storms increasing throughout the afternoon and evening in Northeastern Nevada,” said NWS Elko, Nevada, meteorologist Chris Shulz.

Dry thunderstorms could be present farther south in Arizona and New Mexico, but the highest threat for fire danger lies to the north.

“Arid soils, down slope wind, low relative humidity, and gusty wind, along with dry thunderstorms, will create conditions favorable for Elevated and Critical Risk of fire weather across parts of the Great Basin and Southwest,” the Weather Prediction Center outlined in its forecast discussion.

The monsoon is typically a good omen in the Southwest, providing relief in the arid summer months — but rains have been scarce.

Fire fears are high as drought conditions have deteriorated for lack of the much-needed moisture.

Wildfires have ignited across the US: Forty-seven large active wildfires have burned 519,761 acres across 10 states. That’s over 1 million acres burned thus far this year.

Arizona is enduring the most wildfire activity, with 11 active wildfires. The Telegraph fire has burned over 180,000 acres (about the area of Austin, Texas) since June 4 and is still below 100 percent containment.
The Johnson fire in New Mexico has burned over 85,000 acres at 9% containment, climbing the ranks of the state’s largest fires.

Nevada and Utah currently have six active large fires burning and the dry thunderstorms in the forecast threaten to increase the count.

“We are seeing fire activity now that we typically see in August,” said Kait Webb with Utah’s Forestry, Fire and State Lands.

Since the beginning of the year, 57,245 acres have been burned in the state, most incidents of which were caused by humans. Drought conditions play into ignition by providing critical fire conditions for human and natural fire starts.

Utah Forestry, Fire and State Lands’ Kayli Yardley says this is the driest year she has seen since she began working in the fire industry 17 years ago.

“Here in Utah, we are seeing weather typical of the 1930s during the Dust Bowl. It is so dry, and you have that aridity in the earth, and you get a fire that is sucking all the moisture out of the air. You’re going to have these crazy, catastrophic fires,” said Yardley.

States in the Southwest are strained for firefighting resources. Yardley says Utah competes with California, Arizona, New Mexico and many other states to access valuable resources for preparedness, mitigation and active incidents.

“In terms of fire in general, firefighters are national resources. We share resources across the area level, across the state, across geographic regions and nationwide,” Webb remarked.

On Tuesday, the National Interagency Fire Center (NIFC) raised the national preparedness level to Level 4, the second-highest level, in the month of June for the first time since 2012 due to a significant increase in fire activity.

Level 4 means much of the country is experiencing wildland fire activity and areas are competing for firefighting resources. It also signifies that half of the nation’s wildfire resources are already committed.
This is the second earliest date in the year that the level has been elevated to a 4 since 1990, NIFC said.

Nearly the entire state of Utah is within the category of exceptional drought, along with much of Nevada.

With the upcoming forecast, “the main dangers will be the dry lightning possibly creating new fire starts and then any strong outflow winds from these storms increasing the fire weather threat if there were to be new fire starts,” said Shulz of the National Weather Service in Elko.

“As of right now, we don’t have any fires in northeastern Nevada, but fuels are extremely dry because of the exceptional drought that we’re in,” said Shulz.

Firefighting crews and resources will continue to be strained as the hot, summer season progresses and problem areas shift.

The six- to 10-day Climate Prediction Center outlook indicates a shift in the driest regions, with moisture expected to briefly relieve the farthest states.

Below-average rainfall is expected to the north, including Nevada and Utah. Most of the Northwest has escaped the extreme drought classification, but the outlook could spell unwelcome news in the coming weeks.