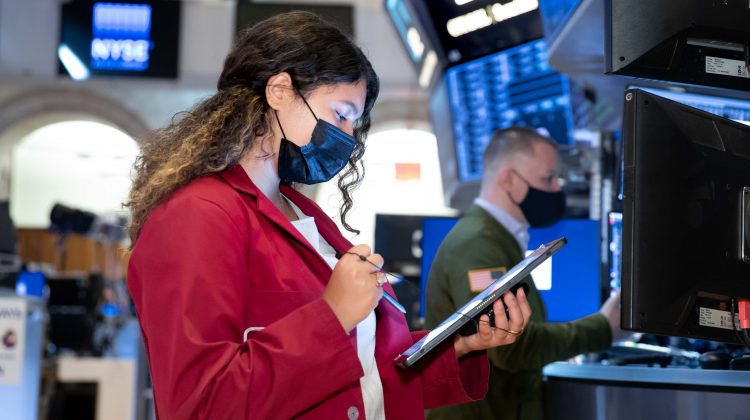 The Dow Jones Industrial Average fell for a second day as investors digested the Federal Reserve’s latest policy update, where it moved up its timeline for interest rate hikes and forecast higher inflation.

Materials-related stocks led the losses as the Fed’s move to eventually raise rates, along with a current campaign by China to tamp down metals prices, took the air out of a surge in commodity prices this year.

Losses in the overall market were tame however and the S&P 500 was still less than 1% below an all-time high as the central bank still maintained its asset-buying program, which some investors argued would support equities some more in the short term.

The Dow Jones Industrial Average dropped about 200 points, or 0.6%, weighed down by 4% losses in Dow Inc. and Caterpillar as most commodity prices took a hit. The S&P 500 was flat. The Nasdaq Composite gained 0.7% as investors huddled in some Big Tech stocks with Tesla and Snowflake up about 2%. Shopify and Twilio gained more than 5%.

The closely-watched Federal Reserve meeting Wednesday spurred a sell-off in equities after the central bank moved up its timeline for rate hikes, seeing two increases in 2023. The Fed also hiked its inflation forecast to 3.4% for the year, a percentage point higher than the FOMC’s forecast in March.

Materials stocks were weaker Thursday as the U.S. dollar increased following the Fed meeting. China is also cracking down on the big 2021 commodities surge to ease inflation fears. Freeport-McMoRan led materials stocks lower, down about 7%. Copper futures were off by 5%.

U.S. oil prices fell more than 2.7% and dipped below $70 per barrel, while the international benchmark fell nearly 3%. Bank stocks rolled over as the 10-year yield gave up its post-Fed gains and then some. The rollover in commodities dragged on yields.

“Commodities have been a popular investment in the last year as investors have been adding some portfolio protection against inflation. So many investors were probably overexposed going into the Fed meeting and the U.S. dollar’s response is forcing some reconsideration,” Jim Paulsen, chief investment strategist at the Leuthold Group, told CNBC.

Hedge fund legend David Tepper told CNBC’s Scott Wapner that the Fed did a good job on Wednesday and that “the stock market is still fine for now.”

Adding to the bearish sentiment on Thursday, the Labor Department reported that initial jobless claims rose last week to 412,000, up from the previous week’s 375,000. Economists polled by Dow Jones expected jobless claims of 360,000.