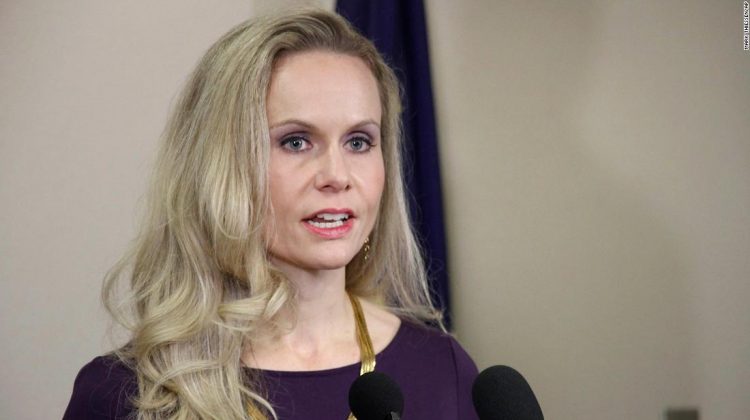 “Lisa Murkowski is bad for Alaska,” Trump said in a statement. “Murkowski has got to go!”

Trump lambasted Murkowski for voting to confirm Biden’s Interior Secretary Deb Haaland, who suspended oil and gas drilling leases in Alaska put in place under his administration. Left unsaid was Murkowski’s effort to include the provision in the 2017 tax overhaul bill that opened up the Arctic National Wildlife Refuge to that drilling — and her criticism of Haaland’s move as “outrageous.”

Murkowski drew Trump’s ire after she said he “failed” to uphold his oath to “defend America and all that we hold sacred” on January 6, when a pro-Trump mob attacked the Capitol in an attempt to stop Congress’ certification of President Joe Biden’s 2020 victory.

Tshibaka, a former Alaska Department of Administration commissioner, has offered herself as a conservative alternative for supporters of Trump, who twice won the state.

“In the 2020 election, there were questions raised in several states, and we’re not allowed to look into the questions of those allegations to see what actually happened,” Tshibaka added. “I still have questions, and I think millions of other Americans do too.”

There was no evidence of widespread fraud in the 2020 election, which President Joe Biden won resoundingly with 306 electoral votes to Trump’s 232. And Trump and his allies’ many lawsuits contesting the election were roundly rejected in court, including before conservative judges and the US Supreme Court.

But Tshibaka’s willingness to cast doubt over the legitimacy of the election illustrates how those eager to win over the former President must adopt his baseless claims.

The race is the first proxy battle between Trump, whose top political advisers have joined Tshibaka’s campaign, and Senate Minority Leader Mitch McConnell, who is backing the nearly 20-year incumbent. It’s put Republican senators — including the National Republican Senatorial Committee — in an awkward position as they remain divided about the former President’s role in the party, and try to unify ahead of the 2022 midterms with control of Congress at stake.

Murkowski has proven her ability to take on challengers from the right, losing the GOP primary in 2010 against tea party candidate Joe Miller and then waging a rarely successful write-in campaign in the general election. She was first appointed to her seat in 2002 by her father, former Gov. Frank Murkowski.

Murkowski could also benefit from a new system where candidates run together in a nonpartisan primary, and the top four finishers advance to the general election.

But Tshibaka is hoping to exploit a Trump-fueled backlash against Murkowski, who has said she did not vote for Trump in 2020 and wrote in someone else who lost.

“Kelly Tshibaka is the candidate who can beat Murkowski — and she will,” said Trump on Friday. “Kelly is a fighter who stands for Alaska values and America First.”

“She is MAGA all the way,” Trump added. “She has my Complete and Total Endorsement!”