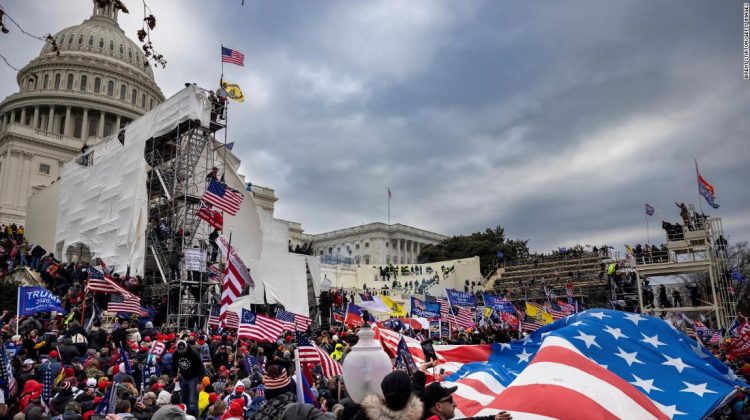 The videos show the defendant, Charles Donohoe, among the rioters and other Proud Boys preparing their moves, then pushing into the US Capitol with makeshift weapons.

It’s also one of the first sets of up-close glimpses provided by prosecutors of the video evidence they’re using to illustrate key Proud Boys moving to attack the Capitol.

The Justice Department didn’t identify on Monday where it got the video from, but the clips appear to match angles and moments caught on film and posted online on various streaming and social media sites on or after January 6.

One video shows Donohoe walking in front of another alleged Proud Boy, Dominic Pezzola, as they both carry a police riot shield. Prosecutors say Pezzola later used the shield to break a window to get into the Capitol. “You just stole a riot shield?” a person asks them in the video. “Yeah,” Pezzola replies. Pezzola is facing a slew of federal charges related to the attack and has pleaded not guilty to all of them.

Another video appears to show Donohoe, with his face covered with a red-and-white-striped bandana, looking on as others in the crowd take down four police officers blocking a stairwell into the Capitol. Prosecutors have made clear they believe this was a key moment in the pro-Trump crowd violently breaking police down to move farther into the building.

A third video, apparently from before the violent push, captures a group of armor-clad men milling outside the Capitol, with one on a walkie-talkie, and another with a bullhorn. One person calls to the others, announcing, “Let’s take the f***ing Capitol.” Another man then tells him, “Let’s not f***ing yell that.” It’s unclear if Donohoe is in the video, but several other Proud Boys conspiracy co-defendants are on the scene.

Donohoe, from North Carolina, is charged in a case that accuses leaders of the Proud Boys of orchestrating breaking into the US Capitol on January 6. Prosecutors say Donohoe coordinated group chats and was a “trusted senior lieutenant” on January 6 who gave directions to others and cheered on another Proud Boy obtaining a police riot shield during the siege.

He isn’t accused of entering the building, though prosecutors say Donohoe moved past trampled barriers into the restricted grounds outside the Capitol. He faces six criminal counts in total, including aiding and abetting the destruction of government property and the obstruction of a government proceeding, and conspiracy.

Donohoe is being held in jail but is seeking to be released. He has pleaded not guilty.

More than a dozen news outlets led by CNN have spent months seeking access to videos used in court against Capitol riot defendants. Much of the police body-camera footage and surveillance tapes that are now being used in court still haven’t been seen publicly, and judges have just begun ordering the release of tapes used in court in cases like Donohoe’s.

Before the release of the videos on Monday, which came following a judge’s order, the Justice Department had sent them directly to a judge overseeing Donohoe’s case.

Donohoe returns to court for his next hearing on Wednesday.