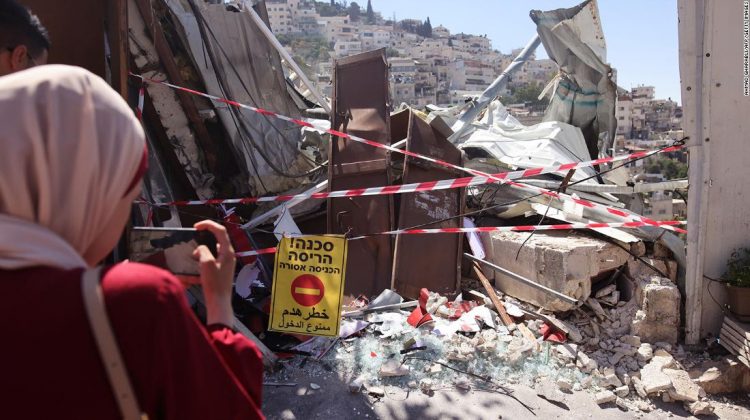 The operation comes during a period of heightened tension in Jerusalem, with Palestinian residents in another neighborhood, Sheikh Jarrah, facing the threat of forced removal from their homes, and a series of violent clashes in May between Israeli police and Palestinians around the Aqsa mosque in the Old City.

Bulldozers, along with Israeli police forces, arrived in Al Bustan around 8:00 in the morning, locals said, and took about two hours to bring down the building, which housed a butcher’s shop.

The owner of the shop, Nidal Rajibi, had received the mandated warning letter, locals said, which had instructed him to pull the building down by last Sunday.

Israeli authorities say the shop, along with several other buildings in the area on which residents say notices have also been served, were constructed without the necessary permissions. Locals say they have tried to get building permits but are always refused.

Rajibi was taken away by police, along with his brother, during the operation, while six people received injuries caused by rubber bullets, as security forces clashed with locals, according to the Palestinian Red Crescent.

“The Israelis told us to demolish our homes by ourselves, but the residents said we will not destroy our own homes with our own hands. They demolished one store to put out a feeler for what is to come, they wanted to test the reaction of the Palestinian street,” Kutayba Odeh told CNN outside the demolished shop.

About ninety structures in Al Bustan could be facing eventual demolition, according to Jerusalem-based attorney Daniel Seidemann, who has chronicled Israel’s settlement policies for decades, though more than 70 of the demolition orders have been stayed by the court, he says, making clearance of the neighborhood in one operation highly unlikely.

Al Bustan lies next to the City of David archaeological site, immediately to the south of the Old City. Lying in East Jerusalem, it is regarded as illegally occupied territory by most of the international community, though Israel regards all of the city as its sovereign territory.

While the immediate fate of the neighborhood might be unclear, Seidemann says Israel’s long-term intentions are plain. “It is part of a project to ring the Old City with settlements and settlement-related open spaces with biblically inspired themes,” he said.

Another East Jerusalem neighborhood, Sheikh Jarrah, has been the scene of repeated violence in the last few months, with Israeli police accused of heavy-handed tactics in the face of protests over the possible expulsion of several Palestinian families from their homes.

The families are trying to prevent the loss of their homes to a Jewish organization which says it holds the title deeds to the properties.

The Palestinian families were settled in the neighborhood decades ago, when East Jerusalem was under Jordanian control, after losing their homes in what became the state of Israel, during fighting in the late 1940s.