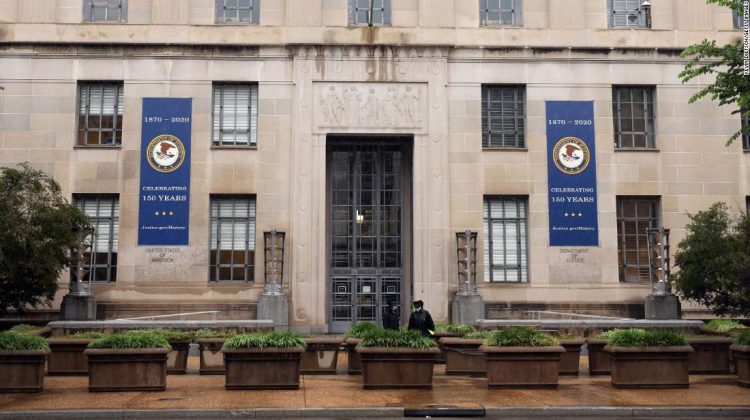 “What the administration did, the Justice Department, the leadership of the former President, goes even beyond Richard Nixon. Richard Nixon had an enemies list. This is about undermining the rule of law,” the California Democrat told Dana Bash.

Pelosi said that at least former Attorneys General William Barr and Jeff Sessions must be called to Capitol Hill to explain what happened.

“We will have to have them come under oath to testify about that.”

The calls for testimony come ahead of Garland’s meeting with senior executives from CNN, The Washington Post and the New York Times. The group is seeking answers on the purpose of demands for journalists’ communications logs — and gag orders covering them up — sought by Trump’s Justice Department, and to prevent future administrations from undertaking such abuses of power.

“It’s a simple goal — it’s to protect the freedom of the press now and in the future,” CNN’s Washington Bureau Chief Sam Feist said on “Reliable Sources” on Sunday.

In another stunning development Sunday, news broke that Trump’s own Justice Department subpoenaed Apple for records of White House Counsel Don McGahn and his wife while he was still the top lawyer for the presidency, according to a person familiar.
The widening push for accountability will present Republicans with a familiar dilemma: Will they again shield an ex-President guilty of a previous string of assaults on democracy that are only now fully becoming clear? In recent months, GOP leaders have repeatedly said that it’s time to move on from the previous administration, with Senate Republicans blocking the establishment of an independent commission to investigate the January 6 attack on the US Capitol that was incited by Trump.

But the issues raised by the secret subpoenas do not just require accountability. The more details that come out, the more the public understands the kind of attacks on basic US freedoms that could ensue if Trump were to win the presidency in 2024 or if his party picks a leader with similar autocratic tendencies. America is already getting a good taste of that with the GOP’s attempts — inspired by Trump’s election lies — to make it harder for many Americans, including Black voters, to cast ballots and to make it easier for GOP officials and legislators to intervene in the certification process after elections.

What did Trump know?

Coming congressional investigations will likely seek to establish whether the former President orchestrated the demands for data and which officials were involved. Two Democratic lawmakers, House Intelligence Chairman Adam Schiff and fellow California Rep. Eric Swalwell, were swept up in the secret data operations. The possibility remains that more covert sweeps against others were attempted and are not yet public.

The Justice Department has already announced a review of the secret data sweeps by the department’s inspector general.

Pelosi also said that she didn’t know if lawmakers other than Schiff and Swalwell were subject to the Trump administration data capture.

“How could it be that there could be an investigation of … members in the other branch of government, and the press and the rest, too, and the attorneys general did not know? So, who are these people? And are they still in the Justice Department?” Pelosi asked.

Senate Majority Leader Chuck Schumer on Sunday said Assistant Attorney General for National Security John Demers and ex-acting Attorney General Matthew Whitaker should be added to the list of officials who should be compelled to testify with subpoenas if necessary.

“This was nothing less than a gross abuse of power, an assault on the separation of powers. I don’t think we’ve ever had a record of this happening in the past,” the New York Democrat said at a press conference in New York City on Sunday.

“What has happened here are fingerprints of a dictatorship, not a democracy,” Schumer said.

In a statement on Monday, Garland said that the department would strengthen its policies and procedures regarding the obtaining of records from the legislative branch of the government. He also said that if, during the inspector general’s investigation, action was warranted, “I will not hesitate to move swiftly.”

A broad target for investigations

There are several separate but apparently linked strands to the latest revelations about a possible use by the Trump administration of the Justice Department to advance the former President’s hardline political goals.

It is not yet clear why Schiff and Swalwell were targeted, but they were both raising questions about the Trump campaign’s contacts with Russia.

The FBI sent a subpoena to Apple in 2018 seeking metadata from more than 100 accounts, including that of a minor. The demand was accompanied by a gag order which meant Apple was prevented from informing the targets of the seizures that they were under investigation.

In another dimension of the scandal, CNN disclosed last week that it fought a months-long legal battle against the Justice Department as investigators sought communications records of Barbara Starr, the network’s Pentagon correspondent. A gag order prevented David Vigilante, CNN’s general counsel, from discussing the order with anyone but the network’s president and a small group of lawyers. Starr was unaware that she had been swept up in the leak investigation, which sought 2017 email logs from a time when she was reporting on North Korea, Syria and Afghanistan, among other issues. CNN still does not know which stories triggered the ire of the Trump Justice Department.
In a CNN op-ed on Monday, Starr said she was “genuinely horrified” by the effort and called for new protections for journalists to prevent such seizures from happening in the future.

“Secret proceedings, gag orders so CNN attorneys can’t speak to me, and eight reporters being swept up in investigations with no explanation — these are not part of a free press in the United States,” Starr wrote.

Three Washington Post reporters have been informed that the Department last year obtained their phone records from 2017. The New York Times said it fought both the Trump administration and the Biden administration in its early weeks over the email logs of four of its reporters.

The Biden administration said earlier this month that it would no longer seize records from reporters in the course of leak investigations. The White House says it is committed to restoring the independence of the Justice Department that was seriously degraded under Trump. But Garland is now facing questions about his initial approach to news organizations and pressure to give a full accounting of what happened.

Garland will be under pressure from media executives in Monday’s meeting to not just explain the extent of the investigations into reporters but to commit to regulatory changes that will prevent future abuses from the Justice Department.

Feist said on “Reliable Sources” that CNN wanted to find out the extent of Justice Department investigations and information about the stories concerned.

“It’s not an accident, I don’t think, that the three news organizations that were targeted by this, by Trump’s Justice Department, were CNN, the New York Times and the Washington Post.”

“These were the organizations that were at the top of his list of enemies of the American people.”

The news on Sunday, first reported by The New York Times, that the Justice Department had also gone after McGahn’s account records potentially added another intriguing dimension to the secret leak investigations.

McGahn and his wife received disclosures from Apple last month that their account records were sought by the Justice Department in February 2018, a person familiar told CNN. McGahn, who incurred Trump’s wrath for refusing to cover-up his request to fire then-special counsel Robert Mueller, was still serving in his official White House position at the time.

The Justice Department went to a judge multiple times to keep the data sweep a secret while Trump was in office but the gag order expired in May.

The Department appears to have accessed McGahn and his wife’s information in the same month it swept up Apple’s data related to dozens of phone numbers and email accounts connected to the House Intelligence Committee, including California Democrats Schiff and Swalwell.

It was not immediately clear who in the Justice Department ordered the subpoena for McGahn’s records. But one of the less nefarious possibilities was ruled out when a source said Sunday that the subpoena did not come from Mueller’s team, when the special counsel was investigating whether Trump obstructed justice.

Sessions, who was recused from all matters related to the Russia probe, and former Deputy Attorney General Rod Rosenstein, who would have overseen a related leak investigation in his place, were not aware of this request for information related to McGahn and his wife, according to another source familiar.

Whatever explanation emerges, the idea that the chief counsel for the presidency was the subject of a subpoena from within Trump’s own Justice Department is yet another staggering development in a coda to a presidency already soaked in abuses of power and anti-democratic maneuvering that, through Trump’s enduring influence over the GOP, threatens to further imperil American democracy.

CNN’s Katelyn Polantz and Paul Reid contributed to this story.