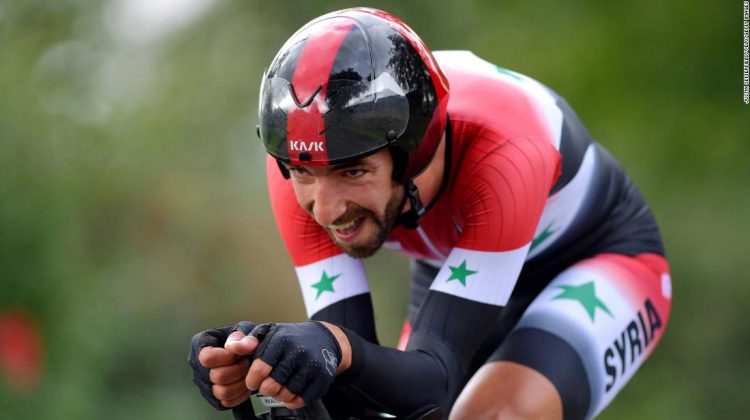 Mahmoud left Syria to pursue his dream of competing in badminton on the biggest stage in the world — a dream that is set to come true in Tokyo this summer.

The 23-year-old left Damascus in search of new opportunities, and with it, he left everything behind.

“Leaving… my family, my friends, my homeland. This was the most difficult thing,” said Mahmoud.

“I decided to leave Syria because I wanted to search for the better future for me as a person and also to feel safe, to live a normal life.

“The second reason was to have more chances to continue my badminton career.”

The Syrian civil war began in March, 2011. There are now 6.6 million Syrian refugees worldwide, of whom 5.6 million are hosted in countries near Syria, according to the UN Refugee Agency. In Syria, 13.4 million people are in need of humanitarian assistance.

Like Mahmoud, Ahmad Badreddin Wais journeyed from war-torn Syria to Europe to pursue a safer existence.

Traveling by a combination of taxi, boat and plane, Wais has settled in Switzerland as he trains to compete in the cycling time trial in Tokyo.

“In the beginning, the plan was not really to come to Switzerland. The plan was to be far away from this war,” said Wais.

“I wanted to be in the center of Europe and to continue to Belgium, because Belgium was for me the home of cycling.

“But the way there, the travel was very long and I was very tired and I stopped in Switzerland and I think I fell in love with the mountain and all these lakes.”

Unlike Mahmoud, Wais says he stayed in Syria for an additional year after his family had already made the decision to flee.

He stayed behind in order to compete for Syria in cycling but decided to leave in 2014.

“It was hard for me because they say I must do training every day, but in my head it was very difficult to see what happened around and we lose a lot of people, a lot of friends and family. And finally, with the sport, I say, ‘No, I cannot continue.'”

Despite finding a new home, Wais says the journey took so much out of him that he was not able to compete again for over two years until 2017 when he set his sights on the Olympic Games.

After receiving a scholarship from the International Olympic Committee in 2019 as a part of its refugee athlete program, the 30-year-old Wais is now focused on performing well at the games and showing the world what refugee athletes can do.

“I hope to be in the top 20 in the time trial for sure; this is my goal or to be the best rider from Asia.

“It means, for me, a lot. It means a lot of work, what I do before [the Games] to be a part of this team and to present this team in the best image in the world.

“And for sure, I will give all my best to be with this team and to be a very good picture for all these people who have left something behind.”

‘Keep fighting for my dream’

Although focused on competing in Tokyo, Mahmoud’s main goal is to be reunited with his family.

He describes an upbringing where his family was often together — even in sport. Mahmoud’s father coached him and his siblings, while he also trained with his sister.

“When they heard I got a scholarship from the Olympic Solidarity Project, they were very happy because I have, like finally got my chance to prove something, to continue what I wanted actually from when I was young.

“So for them, it was very important that I keep fighting actually for my dream and now to be a part of the team and to be able to participate in the Olympics.”

Since leaving Syria, Mahmoud traveled and settled in the Netherlands before ending up in Denmark in January 2021 to pursue his training at the Badminton Centre of Excellence.

Like Wais, Mahmoud says that representing the refugee team in Tokyo will mean everything.

“It means a lot for me, because now we can prove to the world actually that we are able to do something and we have a goal.

“We are fighting for our goals, to reach our goals and to let the world see that we can do a lot.”

The refugee Olympic team was first formed for the Rio 2016 Games and is as an opportunity to show the world that refugees are more than just their migrant status.

Compatriot and fellow refugee, Yusra Mardini, was one of the 10 athletes selected to represent the inaugural Olympic refugee team in Rio.

Mardini and her sister were encouraged to swim from a young age and set their sights on the Olympics after watching Michael Phelps compete on television.

After fleeing Syria, the sisters found a new home in Germany where Mardini continued to swim and follow her dreams. However, when she walked out with the Refugee team in 2016, she felt diminished by her newfound status: “reduced to a single word.”

Now, as an ambassador to the UNHCR and returning to the 2020 Games under the Olympic flag, she says she wants to inspire and educate people around the world about refugees.”Last Olympics, I represented more than Syria,” Mardini told CNN Sport.

“I represented millions around the world. And I really love this idea. If I’m going to compete under the German flag, or the Syrian flag or the Olympic Flag, I’ll be representing all of them.

“Sport actually gave me this really strong voice. I am using it to help refugees to get them to better places, to get them shelter and to just let the people understand that they should open borders for them.”

The power of sport

While their journeys to the Olympics have been different, both Wais and Mahmoud share one striking experience.

They have managed to find new homes and connect with their communities through their sports.

“Cycling, let’s say sport, helped me a lot, too, to forget what’s happened before [the war] and to be therapy for me.

“It was the best option to meet new people, to have contact, to get to know this culture in Switzerland and in Europe, and it was very helpful for me,” explained Wais.

Mahmoud had a similar experience through badminton when he arrived in Europe.

“The badminton helped me actually to become part of the community there; because I played well, I immediately I made some friends.

“That was the most beautiful thing to have. As a sport or as something else to be able to integrate and learn some more.

“You know more about their culture during the sparring and during the training.”