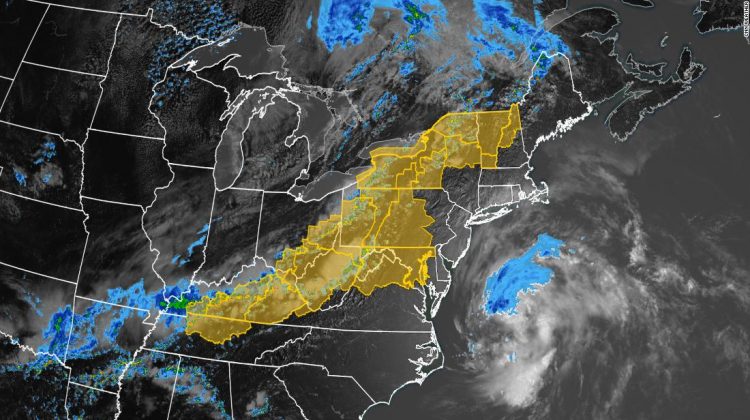 Storms in the watch areas may contain wind gusts up to 70 mph, hail up to 2 inches in diameter and the potential for a tornado or two in the strongest storms, the National Weather Service said.

Multiple lines of severe weather were expected through the afternoon and evening Monday, associated with an advancing area of low pressure over the Great Lakes and trailing cold front. This progression of storms across the Northeastern United States also prompted the Storm Prediction Center to issue an enhanced risk for severe weather from Pennsylvania to Vermont earlier Monday afternoon.

Large hail was expected to be most likely farther north, from New York to New Hampshire, but possibly as far south as Kentucky and Tennessee.

The tornado risk was also highest farther north, where a better environment for supercell formation was located. Conditions in Vermont and New York could be conducive to producing tornadoes later Monday afternoon and evening.

A slight risk for severe weather extended farther south through Kentucky and Tennessee. A marginal risk was in place through Texas, where thunderstorms were also possible Monday afternoon, impacting parts of the South and lower Midwest.

“The strongest cells will pose a risk of locally gusty, damaging winds and hail,” according to the Storm Prediction Center.

The system was expected to march eastward into the evening before weakening as it interacts with the cooler Atlantic air over eastern New England and New Jersey.

At least one tornado was reported moving through the Chicago suburb of Naperville just before midnight Sunday, leaving a path of destruction, hundreds of homes damaged and at least eight people injured.

Naperville and two other suburbs, Woodridge and Darien, experienced the most damage, according to the National Weather Service in Chicago. Some houses were nearly leveled by wind damage and several thousand were still without power Monday.