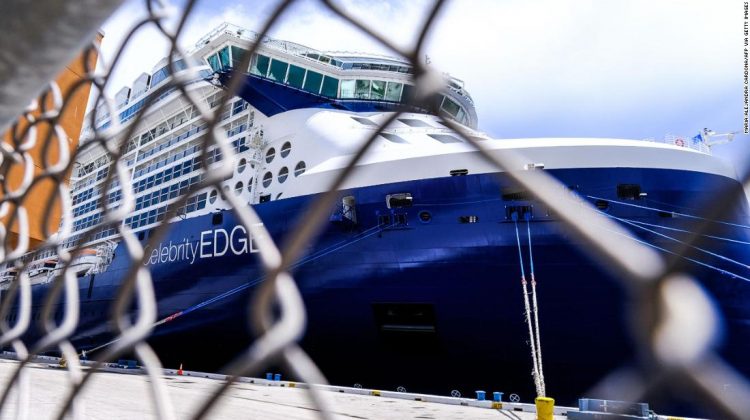 (CNN) — The world’s cruise ships were once titans of the oceans, raking in billions in profit as their city-sized passenger populations traveled across the globe.

But last year, many of these floating palaces became coronavirus epicenters, turned away from port after port as Covid cases rose on board and the pandemic escalated on land.

First passengers, and then crew members, struggled to get home. By summer 2020, the world’s cruise ship fleet was essentially out-of-action. Most vessels were laid up, and some were sold off for scrap as the industry struggled to survive financially.

Now, the first cruise ship carrying fare-paying passengers to depart US shores in over a year has set sail.

The departure of Celebrity Edge, a 1,004-foot ship with a pre-Covid capacity of 2,918 guests, marks a significant step for an industry that has hemorrhaged thousands of jobs and millions of dollars a day during cruising’s suspension.

There’s a lot riding on cruise ships remaining virus-free, navigating the red tape, restoring their reputation and returning safely to the seas.

Cruise ships have been back in Italy for some time. Here’s the MSC Orchestra leaving Venice in early June 2021.

Celebrity Edge — owned by Royal Caribbean Group’s Celebrity Cruises — might be the first cruise to depart from the US, but it’s not the first vessel to start sailing in the wake of the pandemic.

Italian domestic cruises have been operating since then, navigating the choppy waves of the pandemic and the occasional Italian lockdown-enforced pauses along the way.

In the UK, “staycation” cruises confined to UK waters and ports started in May on board the MSC Virtuosa. Similar UK sailings, including voyages from Disney, P&O and Virgin Voyages — in its inaugural sailing — will soon follow suit.

In Singapore, Royal Caribbean “cruises to nowhere” premiered in December 2020, while Celebrity Millennium is currently sailing the Caribbean. In China, Royal Caribbean’s Voyage of the Seas is operating domestic journeys.

Martyn Griffiths from the Cruise Lines International Association (CLIA), the industry body that represents the world’s major cruise lines, told CNN Travel that 16% of CLIA’s ships are back, with that figure expected to rise to 49% by the end of September 2021.

By the end of 2022, Griffiths expects all CLIA members’ ships to be operating again.

Passengers on board the MSC Grandiosa in Barcelona on June 26, 2021.

Cruise companies have implemented multiple on-board health and safety requirements to avoid a repeat of spring 2020.

Restrictions vary country-to-country and depending on the cruise line, but generally ships are running at reduced capacity — Celebrity Edge is at 40% right now, for example.

Rapid testing is also in place, face masks are compulsory in many areas on certain sailings and there are increased medical facilities on board. Many cruises also require crew and/or passengers to be fully vaccinated.

In some countries, cruising is still totally off the table. Australia, which has implemented strict border controls throughout the pandemic, continues to enforce a cruise ban, while Canada has a veto in place until February 2022.

Even in the regions where cruising has recommenced, most ships aren’t straying too far from their home port. There are no four-month world voyages on the cards right now.

International travel in general is still affected by Covid travel regulations and restrictions, and the cruise industry is no different. The UK’s summer staycation sailings, for example, are largely a result of the country’s strict restrictions on overseas travel.

Yet even domestic cruises can encounter complications. On a recent UK voyage, passengers on board MSC Virtuosa were prevented from disembarking on a scheduled Scotland stop off, due to regional Covid regulations.

“It is testament to the effectiveness of our protocols that we have had over 550,000 passengers sailing so far without any major outbreak of Covid on board,” he adds.

So far, cruises haven’t proved themselves to be completely immune to Covid, with occasional positive tests emerging among passengers and crew, but these have been quickly contained.

When Covid has been detected on ships in recent months, the industry says it’s a sign the system is working.

For example, before the MSC Grandiosa returned to the waters in August 2020, one embarking passenger tested positive at both stages and was subsequently denied boarding, as were his close contacts.

Dr. William Schaffner, an infectious diseases expert at Vanderbilt University says it’s all about creating layers of safety — “a series of slices of Swiss cheese” is how he puts it.

The various safety measures now on board ships are “good barriers,” Schaffner says.

“Each one of them has its own limitations and imperfections. But if you do them all together, then the risk really does go down,” he says.

For Schaffner, vaccines are a crucial part of the equation.

“I think the current circumstance where the cruise lines are not able to actually require all of their passengers to be vaccinated is a mistake,” he says.

Passengers wait in line to board Celebrity Edge on June 26, 2021.

Schaffner is referring to the complicated situation in Florida, where vaccine passport bans have made vaccination requirements murky for cruise lines.

The state of Florida also recently successfully challenged the US government guidelines for cruise ships intending to recommence operations in the country’s waters.

Under current regulations issued by the CDC, a cruise ship can depart from an American port if it sails with 95% fully vaccinated crew and 95% fully vaccinated passengers, or alternatively if the vessel has successfully performed a trial cruise under simulated conditions.

For Edge’s sailing, only 5% of passengers are unvaccinated, in line with the CDC’s guidelines.

Before Edge set sail on Saturday, Celebrity Cruises representative Susan Lomax told CNN that the cruise line is still able to ask Florida-based passengers whether or not they’ve had their Covid jab — they just can’t mandate that all passengers are fully immunized.

Non-vaccinated guests over 16 will undergo additional testing at their own expense and must wear their masks at all times, except while eating or drinking. There will also be areas on the ship only accessible to fully vaccinated passengers.

Elsewhere in the world, some cruise lines are mandating vaccines, others aren’t. There isn’t an industry standard.

CLIA’s Martyn Griffiths says vaccines “are restoring confidence the world will overcome Covid-19” and that “cruise lines are adopting a ‘multi-layered’ approach, with multiple measures.”

Roger Frizzell, a spokesperson for Carnival Corporation, which owns Carnival Cruise Line, AIDA, Costa Cruises and Princess Cruises, told CNN Travel that Carnival as a company “have not made any decision at this point” regarding vaccination policy.

MSC Cruises has not made vaccines mandatory on its current voyages.

Disney Cruise Line’s upcoming UK sailing on Disney Magic mandates all guests over 18 must be vaccinated.

Norwegian Cruise Line, which has yet to recommence voyages, is also planning an initial 100% vaccination policy.

Royal Caribbean requires all adult guests to be vaccinated, aside from those on board cruises departing from Florida ports — such as Celebrity Edge.

Another key component of cruising’s safe return is ensuring that, should the worst happen and a cruise ship experiences a Covid outbreak, the ship is allowed to disembark passengers and crew.

Lomax told CNN that Royal Caribbean has agreements in place with certain ports to act as disembarkation centers if there was a outbreak on board the ship.

A Carnival Corporation spokesperson also told CNN Travel that its cruise lines also have “agreements in place with various shoreside medical facilities that would allow us to disembark guests for additional medical attention if ever needed.”

British cruise fan Katie Bunyan, 37, says stepping on board the MSC Virtuosa in June this year was a much-awaited slice of normality.

Bunyan, a hairdresser who traveled with her three young children and her parents, says the Covid regulations made her feel safer than she does on land.

“I’m down the supermarket, I don’t know who’s got what, or when’s the last time they got a test or anything. Whereas on the ship I know everyone has done the test before they set foot on the ship,” Bunyan tells CNN Travel.

Bunyan had only received her first vaccination at the time of embarkation. Under MSC guidelines, Bunyan provided a negative test pre-arrival, but all passengers regardless of vaccinated status were tested pre-boarding. Of Bunyan’s party, only her youngest child, who is 1, was exempt.

After testing, and showing Covid insurance paperwork, the family could relax.

Bunyan and her husband are now considering booking P&O’s July UK “cruise to nowhere.” The couple are now fully vaccinated, so would be able to board in line with P&O’s requirements.

Guests on board the MSC Virtuosa’s first UK sailing in May 2021.

Cruise fan Christine Beehler, meanwhile, is keeping a close eye on US cruising updates. Beehler had 10 cruises planned for 2021, which have all been canceled.

“Some of them due to the pandemic, others because the ship was sold or moved to a very different itinerary,” she tells CNN Travel.

Retiree Beehler has seen first hand the potential impact of Covid-19 on a cruise ship. She was on board the Coral Princess, which returned to the US in April 2020 with 12 confirmed cases on board and two passengers dead.

Beehler, then 72, also tested positive on her return home.

The experience hasn’t put her off cruising, however she’s not booked any of the inaugural US voyages. She says that’s because she’s been to the Caribbean many times, and also because she’s unsure what cruising will feel like in the wake of the pandemic.

“I’ll wait until some of the wrinkles are ironed out on board,” she says.

Beehler is also keen to travel on a ship where everyone is vaccinated.

“I believe that a fully vaccinated ship would lend to more freedoms for all, to move about as we wish,” she says. “Plus, I am not likely to associate with those who choose not to get a vaccine for other than a valid health reason.”

Beehler’s still in touch with several of her fellow cruisers from the Coral Princess.

“All the ones I speak to have cruises planned for the future. Even those who said they would never do another Princess cruise again, largely because of the way the refund and compensation process was handled, are again booking Princess. Time is a great forgetter.”

“I feel let down and frustrated with the way the government handled that situation. The stark difference on how strict they were on the industry, while on land the response was less rapid and quite lackluster,” he says today.

But the former ship performer is excited by the cruise industry’s return. He calls Edge’s sailing “a sign of good things to come.”

“I like how seriously the industry is taking the guidelines in order to ensure the safest travel experience possible,” Morton says, adding that he supports crew-wide and passenger-wide vaccination requirements.

“It’s not just about the passengers getting to travel, it’s also about the safety of the crew members. Crew members who are responsible for providing for their families in various countries. It’s a big responsibility. It’s legit life and death, and that’s not to be played with.”

Morton would like to return to cruise ship life one day, but he’s holding tight for now.

“My contract had just started during the pandemic, and I’d love to finish it,” he says. “However, I do not anticipate that I’ll be going back out this year. I feel a bit scarred from the experience of last year.”

CNN’s Marnie Hunter and Nadia Kounang contributed to this report