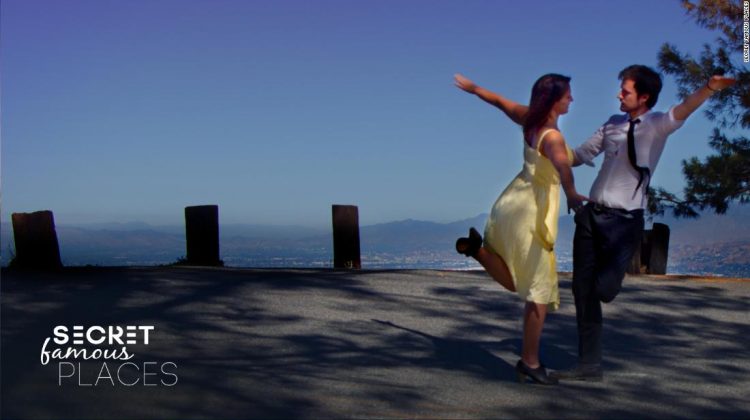 (CNN) — After going on several big trips together as a couple, Robin Lachhein and Judith Schneider, both from Frankfurt, Germany, wanted to do something extra special for their next vacation.

They talked through various potential ideas before coming up with something that excited both of them — traveling to a movie location and recreating a famous scene.

In 2014, they visited Prague and re-enacted a clip from the 1996 film “Mission: Impossible,” making sure to document the moment on camera.

Over the next few years, Lachhein and Schneider visited everywhere from Rome and Iceland, to New York and even Utah, recreating scenes or promotional shots from films like “Thelma and Louise,” “The Hunger Games,” “Eat Pray Love,” “The Devil Wears Prada” as well as TV series such as “Game of Thrones” and “Downton Abbey.”

The account now has nearly 40,000 followers, with the likes of Oscar winners Hilary Swank and Marion Cotillard among those posting in the comments section.

Lachhein, 32 and Schneider, 31, who met at a friend’s birthday party 11 years ago, say they’re thrilled that their slightly unusual hobby is gaining such attention, particularly as they never planned to share the images with the world.

“First we just want to take the pictures for our living room, so we could have great memories from the spots we’d visited,” Lachhein tells CNN Travel. “But more and more people reacted to these pictures.”

According to Lachhein, some of their friends assumed the images had been Photoshopped, and were stunned to learn that they’d actually traveled to the spots featured in the movies, dressed up as the characters and taken their photos at an identical angle.

“We were laughing when we first talked about dressing up like the actors, because that’s a lot of work,” says Schneider. “But then we gave it a try.”

They also go to great pains to make sure that the angle is as close to the original picture as possible.

“You have to get the right angle, the right perspective and stand in exactly the spot where the actor or actress was standing,” explains Lachhein.

The first shoot they did didn’t quite go to plan. After dressing up in their costumes, putting on the appropriate make up and going to the Charles Bridge in Prague to mirror a pose from Tom Cruise in the first of the “Mission: Impossible” movies, it began to rain uncontrollably.

Lachhein and Schneider had little choice but to turn back and reconvene the following day. Thankfully they were eventually able to get the shot they needed, and soon began planning other movie location trips.

‘We have to improvise’

However, recreating an iconic film or TV scene isn’t as simple as just turning up at the location one day and pulling out a camera.

The couple often have to do a lot of planning in order to determine exactly where the spot featured in the sequence they want to focus on is, as well as how to get there.

They walked for hours to get to the spot where Emma Stone and Ryan Gosling dance in the 2016 film “La La Land,” while villagers were on hand to help them find a specific rock in New Zealand from the 2008 action-adventure movie “10,000 BC.”

“If it’s not that big a movie, then it’s a little bit difficult,” explains Lachhein. “Then there’s many hours of research on Google Maps trying to find the overview of the area.”

On some occasions they’ve had to gain permission to take photos in a particular place, as was the case when the pair re-enacted scenes from 2020 movie “Tenet” at Villa Cimbrone in Ravello, Italy and “Star Wars: Episode II Attack of the Clones” at Lake Como.

Then there’s the small matter of making sure they have clothes identical to those worn by the film or TV characters they’re posing as.

“We always try to use things we already have so that we don’t buy a lot of stuff,” says Schneider, recounting how they made a necklace out of a piece of steel for a particular scene from “Star Wars”.

“Or we borrow from our friends. Sometimes it’s very easy, you might need jeans, white shoes and a shirt. But for something like ‘Game of Thrones’, it’s very complicated. We have to improvise a lot.”

One of the most popular images on their account is a recreation of a sequence from the 1994 movie “Forrest Gump” taken in Monument Valley, in which they enlisted a group of travelers to stand in the background to make it look more authentic.

If the place they need to feature happens to be in a popular tourist spot, such as the bench from 2014 film “The Fault In Our Stars” starring Shailene Woodley and Ansel Elgort, which is located next to the Leidsegracht canal in Amsterdam, getting the image they need can be even more challenging.

“There were a lot of people who wanted to sit there,” says Schneider. “So we waited, and waited until it was empty.”

Their painstakingly precise efforts have proved to be a hit on Instagram, with Swank giving the account her seal of approval when she commented, “That’s incredible!” on their image from her 2007 movie “P.S. I Love You,” which also starred Gerard Butler.

However, Welsh actor Tom Cullen, who played Viscount Gillingham in “Downton Abbey” was the first star to post a message, writing “nailed it” on their image mirroring a scene from the popular ITV show captured outside Highclere Castle in the UK.

“At that moment, we had maybe three pictures and 300 followers or something like that,” says Schneider. “So that was very nice [of him].”

As they both work full time, Lachhein and Schneider plan their trips within the six weeks vacation time they’re allotted each year.

Although some of their followers have assumed the pair’s trips are financed by their families, they stress that they pay for everything themselves and don’t earn any money from their pictures.

They try to avoid Photoshop as much as possible so that the photos are a true depiction of the location, but admit to occasionally using filters and/or altering colors in order to enhance an image.

While the couple don’t necessarily choose their vacation destinations based on the movies they want to create, Lachhein admits that the prospect of visiting the filming location for 2010 movie “Inception” played a big part in their decision to go to Paris in 2017.

“‘Inception’ is my favorite movie. I wanted to create this scene with Leonardo DiCaprio and Marion Cotillard at the [Pont de Bir-​Hakeim] bridge looking at the Eiffel Tower.

“So then we had to go to Paris. And we combined the trip with different movies and series.”

They’ve been particularly touched by the trouble that some of the locals have gone to to ensure they get the exact image they need.

“People are so proud that these filming locations are in their city,” explains Schneider. “And they try to help us a lot. They are so kind.”

While the pandemic has put many of their foreign trips on pause for a while, the couple have been able to travel around Germany shooting images, and also paid a visit to Italy last summer, when travel restrictions were briefly lifted.

Despite recreating around 100 movie and TV scenes, they have many more on their wish list.

They hope to visit London in the coming months, as well as New York and Australia, when international travel reopens.

“The list [of locations] is long,” says Schneider. “I think we will spend quite a few more years doing this.”