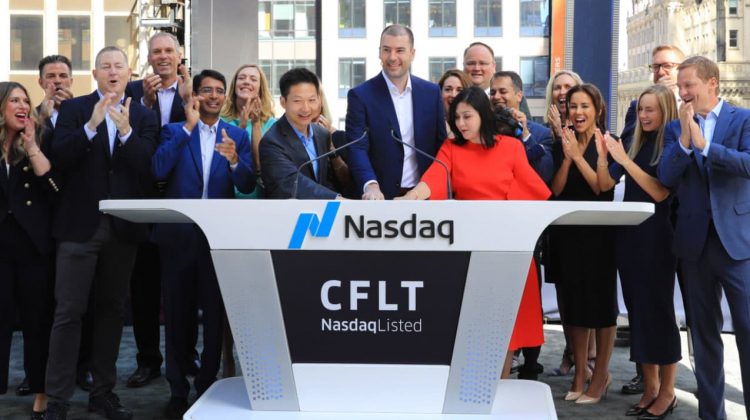 Confluent, the data analytics vendor that spun out of LinkedIn in 2014, climbed 26% in its Nasdaq debut on Thursday after the company was valued at $9.1 billion in its IPO.

Confluent’s software tracks the many events taking place inside a company, whether it’s a new sale, an order, a trade or a customer response, and filters those real-time insights into a company’s databases. As businesses have become more complex, with data living in various clouds and in on-premises servers, demand has surged for Confluent’s so-called data streaming products.

Revenue climbed 58% last year to $236.8 million, according to the prospectus. However, research and development costs jumped 81% and stock-based compensation soared, leading to a net loss of $229.8 million, up from $95 million in 2019.

Confluent is built on Apache Kafka, an open source technology that was created inside LinkedIn in 2011 by Jay Kreps, Jun Rao and Neha Narkhede. After using the technology internally for data streams, the trio spun out Confluent as a separate company in 2014 with an investment of about $500,000 from LinkedIn.

While Kafka remains a free open-source product that can be managed as a service by Amazon, Microsoft or Google, Confluent commercializes the software, offering all of its capabilities and running it across any of the major clouds or in a company’s physical data center.

Kreps told CNBC’s “TechCheck” that the cloud providers are partners more than competitors.

“One of the reasons they like working with us is because we help connect all these new layers that are in the cloud into a lot of the data that exists in other clouds or on premise,” Kreps said. “Really tying that together around a central nervous system is a huge problem that companies have to face.”

Confluent said in its prospectus that over 70% of Fortune 500 companies are estimated to have used Kafka. Its customers include Citigroup, Humana, Intel and Walmart, according to Confluent’s website.

Confluent is the latest company built on open-source technology that’s gotten big enough to go public. Database platform MongoDB debuted in 2017 and is now valued at $24 billion. Elastic, which commercializes open source tools for enterprise search, went public a year later and has a market cap of $13 billion. Databricks sells software built on Apache Spark, helping companies clean up large volumes of data. The company was valued at $28 billion in a private financing round in February.

The model hasn’t always worked for public investors. Cloudera, one of several companies that focused on the Apache Hadoop data analytics framework, agreed to sell to private equity firms earlier this month in a $5.3 billion deal. Cloudera merged with rival Hortonworks in 2019, as both companies were burning cash and their stocks were dropping.

Even after the tie-up, Cloudera continued to struggle, primarily because it was late to the cloud market, where Databricks has flourished.

At Confluent’s IPO price, Kreps owns a stake worth $1 billion. Venture firm Benchmark is the biggest investor with shares worth $1.3 billion, followed by Index Ventures, whose stake is valued at about $1.1 billion.