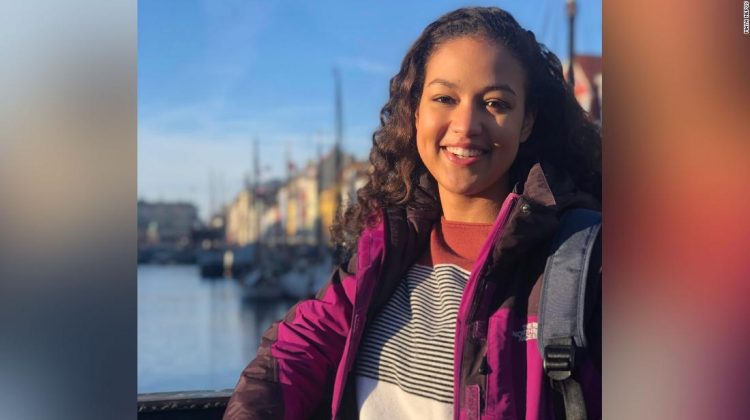 At first, Nepos decided to start a challenge on TikTok to her almost 330,000 followers to see how quickly she could spend the $600 in two days from her campus store. Nepos had amassed a large following as a self-described social justice and political advocacy creator.

Nepos bought snacks from a campus market but soon realized she wouldn’t be able to eat all the food. She started giving it to those in need.

Nepos created care packages that she personally delivered to homeless individuals in St Louis, adding masks and hand sanitizer as to protect against Covid.

Nepos hand delivered about 40 packages to people in need the first two days of her journey. She documented her deliveries and the video has gone viral, with more than 7 million views, according to Nepos’s TikTok account.

She tried to make sure the packages included nonperishable food that could be easily consumed.

“I tried to be more cognizant of their situations and be realistic of the resources they (homeless individuals) had with them,” she said.

Nepos’s followers began to donate money to Nepos electronically via Venmo and PayPal to help her create and deliver more care packages.

A total of $746 was donated. Nepos bought packaged fruit and vegetables, other nonperishable food and even feminine products such as tampons.

“I actually was so focused on trying to make the donations stretch and finding deals on non-perishable food items that I actually forgot to buy my own groceries that day,” Nepos said.

Over the course of six days, Nepos delivered approximately 80 to 100 packages in the St. Louis community by herself.

She said the experience has shown her that, “you can make a big difference in just one person’s life with not a lot.”

She became friends with Darryl

During her deliveries, Nepos became friends with an unhoused individual, Darryl, who has also become popular on Nepos’s TikTok.

Nepos met Darryl on a busy intersection in St. Louis on the first day of her deliveries. He is 52, has two children and he is also a diabetic. Darryl is looking for a job, specifically in the service sector, Nepos said.

“He is just the sweetest man. We had the most immediate friendship connection. We’re pretty good friends now,” Nepos said.

Nepos ran out of care packages for Darryl on her second day of deliveries so she bought him a Shake Shack burger and fries.

Darryl’s story has connected with Nepos’s TikTok followers so much that they donated money to buy Darryl gift cards to shops such as Subway. They even donated enough money to purchase Darryl a phone to assist him in his job search.

Nepos said she even convinced Darryl to get the Covid-19 vaccine. Darryl at first was unsure, but he agreed to get the vaccine if Nepos joined him at this appointment, she said.

“Darryl is looking for a job, it was hard for him to contact employers without a phone,” or to coordinate interviews with employers because they had no way to contact him.

Darryl also a needed a phone number to register for the Covid-19 vaccine, Nepos said.

Nepos said cities are coming up with “creative ways to make laws to stop panhandling and to make homelessness illegal.”

Nepos said she thinks the government should fund and operate more programs to support homeless people like Darryl.

“Darryl doesn’t have access to transportation, a social security card, the internet. There are barriers to get out of homelessness,” she said.

“Stepping stone” programs are difficult for homeless people to access because of barriers such as lack of transportation, she said.

“There needs to be more active community engagement. Instead of sitting in building and saying homeless people can come here and get help if they need, (they) need to be proactive and offer a hand up,” Nepos said.

Nepos graduated with a major in psychology and a minor in marketing. She said she’s looking for a job.