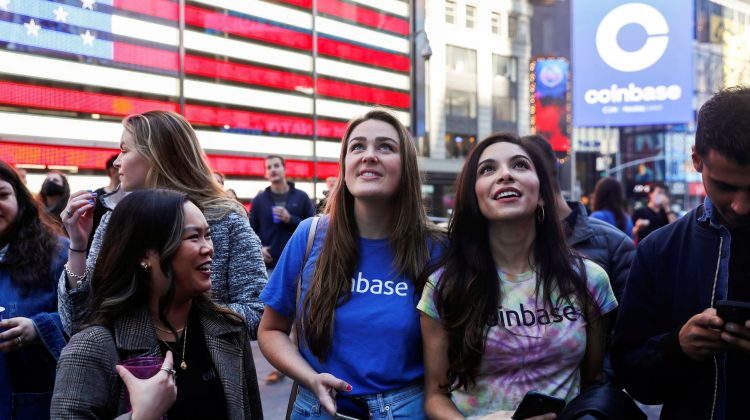 Employees of Coinbase Global Inc, the biggest U.S. cryptocurrency exchange, watch as their listing is displayed on the Nasdaq MarketSite jumbotron at Times Square in New York, U.S., April 14, 2021.

The price of cryptocurrencies were struggling again on Tuesday, with the price of bitcoin briefly falling below $30,000 for the first time since January before rebounding.

This latest milestone in bitcoin’s price continues a dramatic fall for the leading cryptocurrency, which is down more than 50% from its record high early this year. As it turns out, that peak occurred on the same day Coinbase officially entered the financial mainstream.

Coinbase went public through a direct listing on April 14, first trading at $381 per share and then spiking to nearly $430 before retreating. On the same day, bitcoin broke above $64,000 to hit a new all-time high.

Neither the cryptocurrency nor the stock have come close to those levels since.

For dogecoin— the derivative of bitcoin that started as a joke based on a popular internet meme — there is a similar story.

The high point for this crypto asset coincided with Tesla CEO Elon Musk’s appearance on the May 8 edition of “Saturday Night Live” after Musk had repeatedly mentioned the coin on social media. During the show, Musk described dogecoin as “a hustle.”

However, doge caught a second wind later that month and rose to smaller peak on June 2, the day before Coinbase began supporting trading of the coin on its platform. Since then, the cryptocurrency has dropped more than 50%, according to CoinMetrics.

This volatility hasn’t been particularly good for Coinbase’s share price, either. The stock was trading at about $219 per share on Tuesday, down more than 40% from the price of its first trade in April.

It’s possible over the longer term, Coinbase’s mainstreaming of crypto leads to greater adoption and higher highs for bitcoin, dogecoin and the rest. But for now, when the crypto exchange makes a move, it marks the peak of euphoria and has been a reliable sell signal.

Disclosure: “Saturday Night Live” is a TV show of NBCUniversal, the parent company of CNBC.