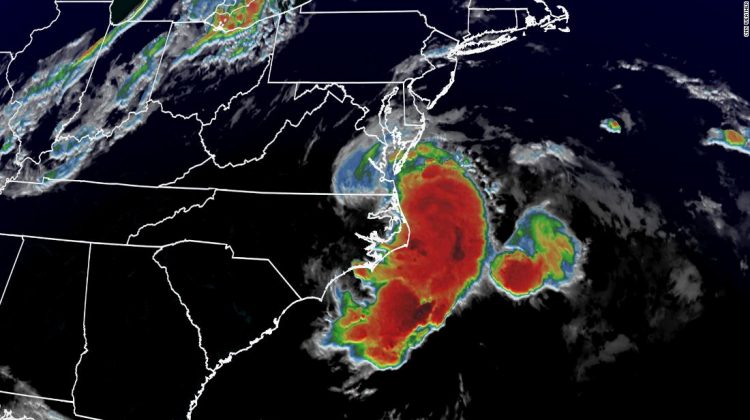 Claudette’s maximum sustained winds intensified early Monday to 40 mph — barely over the threshold between a tropical depression and a tropical storm, according to the National Weather Service.

No tropical storm warnings were in effect as of 8 a.m. ET.

“These winds are occurring mostly over water, southeast of Claudette’s center,” the National Hurricane Center said. “Some additional slight strengthening is possible over the western Atlantic Ocean today.”

At 8 a.m. ET, the hurricane center said Claudette was about 15 miles west of Duck, North Carolina, and about 30 miles south of Norfolk, Virginia. The tropical storm was moving east-northeast at about 28 mph.

A trail of destruction

Claudette was a tropical storm before making landfall Saturday morning about 45 miles southwest of New Orleans, according to the National Hurricane Center.

In less than a day, southeastern Louisiana was inundated with more than 8 inches of rain, according to the weather service.

Claudette also dumped up to a foot of rain on parts of Mississippi and Alabama over the weekend.

The storm moved over land as a tropical depression, meaning it had maximum sustained winds of less than 39 mph.

But it caused dangerous conditions in places like Butler County, Alabama, where a multi-vehicle crash killed nine children and an adult.

Also in Alabama, a tornado struck the community of East Brewton, firefighters said.

Debris and downed trees were strewn across the community of about 2,900 near the Florida state line, photos from resident Alicia Jossey showed.

Three people in Escambia County were injured by the tornado, the county’s Emergency Management Agency said. The tornado damaged several homes, and law enforcement closed US Highway 29 in East Brewton because of power lines in the roadway.

Jossey had just enough time to get her 17-year-old son and their pets to hunker down in the middle of the house before the storm pushed through, she told CNN affiliate WPMI. When they emerged, Jossey was “in shock.”

“I have peoples’ hats on my front porch, and I have frames from people’s houses and little things like caulk from somebody working on something,” she said.

“I have half of someone’s car seat in my backyard.”

What’s next for Claudette

The storm is “forecast to become a post-tropical cyclone Tuesday afternoon and dissipate late Tuesday night,” it said.

The Atlantic Ocean, Gulf of Mexico and Caribbean Sea are near the beginning of the 2021 Atlantic hurricane season, which runs from June 1 to November 30.

CNN’s Chad Myers and David Williams contributed to this report.