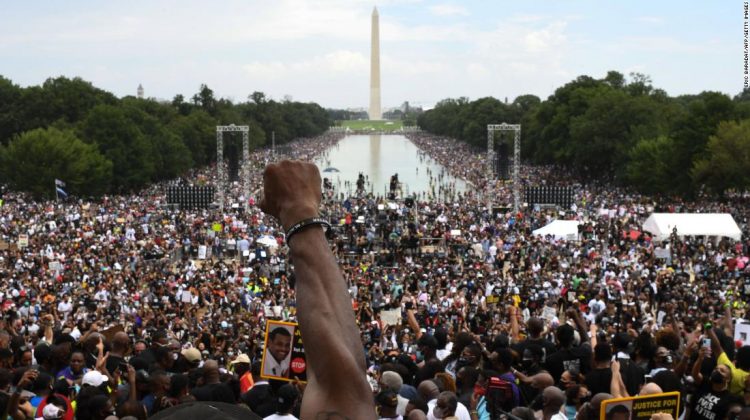 The announcement of the march comes one day after Senate Republicans blocked the For the People Act — a signature voting and election bill that Democrats had pitched to counter state-level efforts. Republicans denounced the bill as a partisan power grab and a federal overreach into state voting and election systems.
The march, set for Aug. 28 with the theme “March On for Voting Rights,” will mark the 58th anniversary of the historic March on Washington where Martin Luther King Jr. delivered his famous “I Have a Dream” speech. Marches are set to be held in Washington DC, Atlanta, Miami, Phoenix and Houston.
Martin Luther King III, the eldest son of Martin Luther King Jr., will lead the march with his family’s organization the Drum Major Institute along with March On, Service Employees International Union and the National Action Network.

“It disheartens me to say that as a country and society, we are not even close to where my father hoped we would be since delivering his ‘I Have a Dream’ speech 58 years ago,” King said in a statement. “I think my father would be greatly disappointed in where we are at this particular moment, but he would not give up on the nation.”

Rev. Al Sharpton, who heads the National Action Network, said it is critical that Americans march to defend the right to vote. This year, 48 states have introduced 389 bills that would restrict voting access after record turnout in the 2020 election delivered victories for Democrats. Some of the restrictions include banning ballot drop boxes, cutting early voting days and hours, prohibiting serving food and beverages to voters waiting in line and limiting who can vote by mail.

“It’s time for all Americans to come together and join this non-violent, non-partisan movement in the spirit of Dr. King and the values he pushed this nation to uphold,” Sharpton said. “I’m proud to be a part of the March On for Voting Rights because there is no democratic right more sacred than the right to vote, and it is under threat across America. We must fight to protect it.”

This will be the second consecutive year that organizers have commemorated the March on Washington with a renewed effort to fight for equality. Last year’s Get Your Knee Off Our Necks Commitment March in Washington pushed for both federal voting rights legislation, police reform and came at the height of a racial reckoning sparked by George Floyd’s death.

Tens of thousands of people attended the march including several families of Black people who have been killed by police. And while demonstrators marched for both the George Floyd Justice in Policing Act or the John Lewis Voting Rights Advancement Act, neither has been passed.