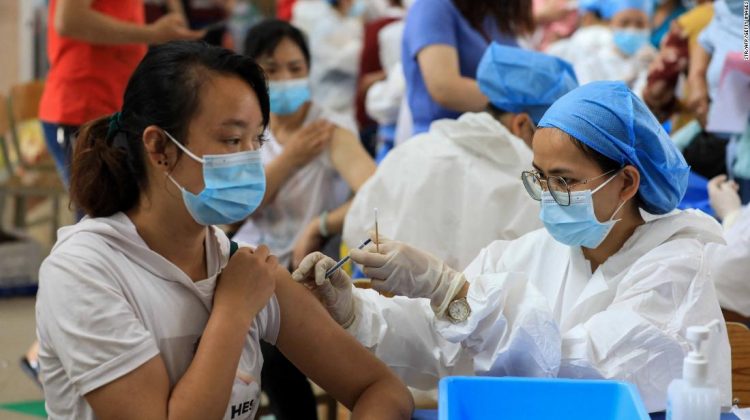 Within days, China will reach a staggering 1 billion doses in its Covid-19 vaccination drive — a scale and speed unrivaled by any other country in the world.

As of Wednesday, China had administered more than 945 million doses — three times the number delivered in the United States, and almost 40% of the 2.5 billion shots given globally.
The number is all the more remarkable given its rollout had a slow start. China only reached its first million doses on March 27 — two weeks behind the US. But the pace picked up significantly in May, with more than 500 million shots given over the past month, according to data from China’s National Health Commission.

On Tuesday alone, it administered more than 20 million doses. At that rate, it is likely to exceed 1 billion doses this weekend.

Vaccinating a country of 1.4 billion people against Covid-19 is a massive undertaking. Due to China’s successful containment of the coronavirus, many residents initially saw little urgency in getting vaccinated. A history of safety scandals involving domestic vaccines also contributed to public hesitancy.

But several recent local outbreaks, including in the northern Anhui and Liaoning provinces and Guangdong in the south, have fueled fears of infection, prompting a rush to get vaccinated in affected regions.

For those still reluctant, China has a powerful tool in its arsenal: a top-down, one-party system that is all-encompassing in reach and forceful in action, and a sprawling bureaucracy that can be swiftly mobilized.

The top-down approach has been touted by officials as a strength of the Chinese system that helped curb the virus — and has again been deployed to accelerate inoculations.

The all-out campaign to “vaccinate all who can be vaccinated” is being carried out across the country, in major cities and tiny villages alike, with government workers descending on neighborhoods to convince people to get vaccinated. In state-owned companies, meanwhile, employees are urged by their bosses to take the shots, while vaccination sites offer benefits, ranging from shopping vouchers to free groceries and ice cream.

Governments around the world have tried both carrot and stick-type approaches to encourage people to get vaccinated. But in China, punitive measures can sometimes take a darker turn.
Some residential compounds have warned residents they will be barred from reentering unless they are vaccinated, according to residents‘ posts on social media. One shopping mall in Shanghai put up a sign at its entrance, requiring customers to show their vaccination certificate for entry. A city park in northern Hebei province turned away unvaccinated visitors and guided them to nearby inoculation sites.
As the number of vaccinations exploded, some local governments even suspended the inoculation of the first dose this month, in order to make sure there were enough for people to get their second does in time.
China’s National Health Commission does not offer a breakdown on how many people have been fully vaccinated. But the distribution is uneven. By the first week of June, the major cities of Beijing and Shanghai had fully inoculated nearly 70% and 50% of their residents respectively. But the rate in Guangdong and Shandong provinces remained below 20%, according to Reuters.
Zhong Nanshan, a top epidemiologist and government adviser, said China is aiming to fully vaccinate 40% of its population by the end of the month, and double that percentage by the end of the year.
Due to its huge population, China’s doses per 100 people is still behind countries such as the US and Britain. But if its inoculation drive can keep up the current pace, it will be catching up fast.

Get your Christmas shopping done earlier this year — like, really early.

A coronavirus outbreak in southern China has clogged ports critical to global trade and caused a shipping backlog that could take months to clear.

That’s because authorities in the province of Guangdong — home to some of the world’s busiest container ports — were forced to lock down communities and suspend trade so they could bring the outbreak under control.

While the number of cases has abated, major ports are still operating below capacity, creating a domino effect of delays across the entire region. And that’s particularly bad news when you’re home to Shenzhen and Guangzhou, the fourth- and fifth-largest comprehensive container ports in the world.

The upshot: The pain from this backlog could soon be felt by retailers and consumers, leading to a shortage of goods and price increases all the way through the end of the year.

The clog “is adding extra disruption on an already stressed out global supply chain, including the significant seaborne leg of it,” Peter Sand, chief shipping analyst for the shipowners association Bimco, told CNN Business.

He warned that people “may not find all they were looking for on the shelves when shopping for Christmas presents later in the year.”

Read more about the latest threat in the ongoing supply chain crisis on CNN Business.

A newsroom raided: Hong Kong police declared the Apple Daily newspaper office a crime scene Thursday, after 500 officers descended on the premises to arrest executives and top editors and seize journalistic materials under the city’s national security law. The arrests and probe are the latest step in an escalating crackdown against the provocative, anti-Beijing tabloid, which has become the poster child in Hong Kong for media freedom in what many analysts argue is an increasingly hostile landscape for the industry.