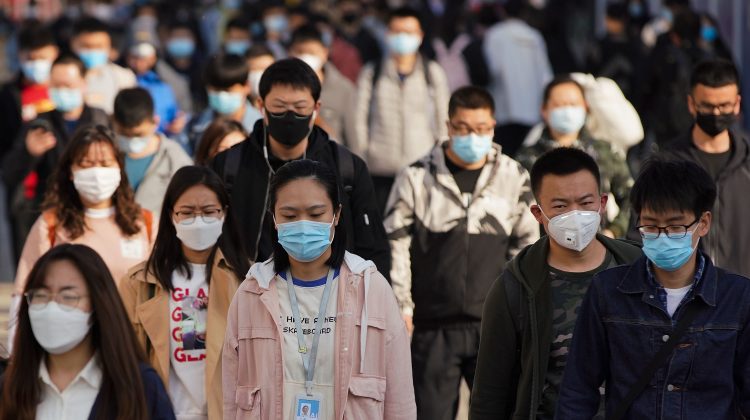 Commuters wear protective masks as they exit a train at a subway station during Monday rush hour on April 13, 2020 in Beijing, China.

BEIJING — Chinese businesses and consumers are not as optimistic on the economy as overall data might indicate, according to an independent study by the China Beige Book released Tuesday.

In its latest quarterly survey, the U.S.-based firm found that a measure of Chinese corporate borrowing fell to its lowest in the study’s history, and that expectations for loan demand in the next half year dropped — despite low interest rates.

Of particular concern, the number of retailers taking out loans fell to a record low, the report said.

“After the pandemic, it’s extremely hard to believe this is a result of adequate capital on hand,” the authors wrote. “Far more likely, retailers are split between seeing little possibility for expansion and thinking their loan applications won’t fly.”

The trend is worrying for an economy that the government is trying to drive with individual consumption.

“If credit stays this tight and Retail doesn’t break out of its coma, the economy next quarter will have a difficult time matching this level of growth,” the report said.

The study indicated second-quarter business activity was similar to that of the first, with revenue and profit unchanged and some increased hiring.

China’s GDP grew 18.3% in the first quarter from a contraction a year ago — or an increase of 10.3% compared with the same quarter in 2019. Second quarter GDP is set for release on July 15.

However, retail sales growth has come in below analysts’ expectations for the last two months.

“Retail weakness is being driven by consumers becoming more defensive,” Shehzad H. Qazi, managing director at the China Beige Book, said in an email. He noted that Chinese consumers are spending on food, but not as much on luxury, apparel, furniture and appliances.

“We think this is driven by two major factors: first, people remain apprehensive about future Covid outbreaks; second, Chinese consumers are simply not convinced that a sustainable, broad-based economic recovery has been achieved as yet,” Qazi said.

While China controlled the domestic outbreak of Covid-19 by the second quarter last year, pockets of outbreaks in the year since have prompted small lockdowns and fresh restrictions on social activity in different pockets of the country. The latest spike in cases began in late May in the export hub of Guangdong province.