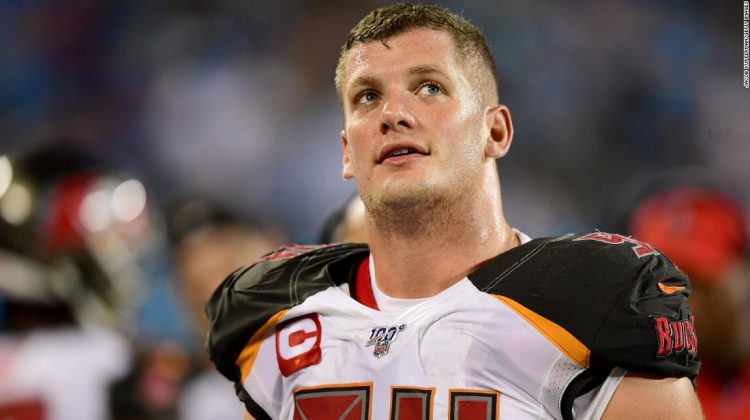 Its impact has been massive.

“Representation like this is life-saving,” said Sarah Kate Ellis, president and CEO of GLAAD, the world’s largest LGBTQ media advocacy organization. “Knowing that they have a future, that there are people that are leading the way for them, that there are people that they see that they identify with is categorically, and oftentimes, life-changing for them.”
Most of the new bills center on young transgender athletes. Earlier this month, Florida became the eighth state this year to ban transgender girls and women in public secondary schools and colleges from participating on girls’ and women’s sports teams.

“Carl’s announcement is important for LGBTQ young people who have not been able to see themselves in athletics,” Human Rights Campaign President Alphonso David said. “His announcement is also important because we have so many young LGBTQ people who attempt suicide, who are thrown out of their homes, who are denied their very existence by legislators across the country.”

While there’s still a lot more progress to be made, LGBTQ advocates say this moment — and its far-reaching impacts — is worth celebrating.

In his video, Nassib said that while he’s generally a private person, he opted to share that he’s gay because, he said, “representation and visibility are so important.”

That kind of visibility not only helps change the perceptions of fans and youth who are for the first time seeing an out successful football player, according to Ellis, but it also helps build acceptance within the larger population — including among relatives of LGBTQ people.

“So (LGBTQ youth’s) parents will potentially be more accepting because they might be a fan of this team, and say ‘Oh my goodness, Carl is just like everybody else,'” said Ellis. “It demystifies who LGBTQ people are and it makes the world more accepting.”

But his coming out also helps send a powerful message to others in the LGBTQ community who may have not been able to do so yet, said Melanie Willingham-Jaggers, interim executive director of GLSEN, a group dedicated to LGBTQ rights for students in grades K-12.

“Coming out is not for the world,” Willingham-Jaggers said. “It’s for the people who are in the closet, so they can see, ‘Look, look at this. I’m coming out, I’m telling people who I am, I’m doing the thing that feels so scary — which is risking rejection, which is risking, unfortunately, violence and being ostracized and pushed out.'”

‘What he has done will absolutely save lives’

Studies have found LGBTQ youth are at at higher risk of bullying and suicide than their heterosexual peers. A 2017 survey from the US Centers for Disease Control and Prevention found nearly half of lesbian, gay and bisexual students had seriously considered suicide.

“What (Nassib) has done is he has recorded a video that any young person can watch and see validation,” David added. “And we cannot underestimate the power that that has for young LGBTQ people who have been devalued for such a long time. So what he has done will absolutely save lives.”

In a statement accompanying his Instagram video, Nassib said he was saddened by LGBTQ youth’s elevated risk for suicide and announced he was donating $100,000 to The Trevor Project, a suicide prevention and crisis intervention organization for LGBTQ youth. The NFL later announced it was matching his donation to the organization.

In the day following Nassib’s announcement, the Trevor Project told CNN it saw daily online donations shoot up by 50% — some of which were accompanied by notes referencing the athlete. The organization’s website saw a 350% jump in traffic.

“We’re just incredibly grateful to Carl for bringing attention to LGBTQ young people and the challenges that they face and the work that the Trevor Project does,” Amit Paley, the organization’s CEO and executive director said. “I think a lot of people are hearing the story and they’re feeling inspired by him living his truth and they’re wanting to contribute.”

Still a lot of progress to be made, advocates say

While it’s important to acknowledge the positive impact of Nassib’s announcement, advocates say bills that have been introduced across the United States this year can send a very different message to young LGBTQ people.

So far this year, at least 17 anti-LGBTQ bills have been enacted into law, according to the Human Rights Campaign, and more than 250 bills were introduced in state legislatures throughout the country.

“These anti-LGBTQ bills that we’ve seen across the country … they are a danger to all kids because they show kids that they, especially LGBTQ kids, that they don’t matter, that they need to be legislated against and that their lives are not as important and that they should be targeted by their government,” Ellis, with GLAAD, said. “So Carl coming out is especially, with all these anti-trans bills in sports, is a really big deal.”

But the road to progress takes everyone, Ellis said — and it starts by individual actions, such as speaking up when something is unjust, or simply offering support.

Local policies, such as creating safe spaces in schools and communities, are just as important, Willingham-Jaggers added. And finally, the advocates CNN spoke to all pointed to one piece of legislation they say is vital in the fight for justice: the Equality Act.

The legislation, which the US House passed earlier this year, would amend the 1964 Civil Rights Act to protect people from being discriminated based on sexual orientation and gender identity in employment, housing and other services as well as access to public accommodations such as restaurants. It’s a measure advocates say is long overdue.

“That is a great place where we could use allyship from people across the country,” Ellis said. “This piece of legislation will ensure that we have equal rights.”