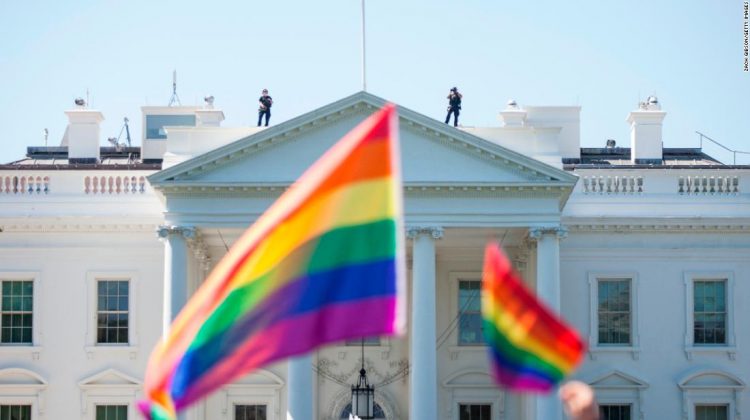 “To Carl Nassib and Kumi Yokoyama — two prominent, inspiring athletes who came out this week: I’m so proud of your courage. Because of you, countless kids around the world are seeing themselves in a new light today,” Biden wrote in a tweet.

On Monday, Nassib, a defensive lineman with the Las Vegas Raiders, became the first active NFL player in league history to announce that he is gay.

The 28-year-old made the announcement in a video on Instagram in which he said he thinks “that representation and visibility are so important,” adding: “I actually hope that one day videos like this and the whole coming out process are just not necessary. But until then, I’m going to do my best and do my part to cultivate a culture that’s accepting, that’s compassionate.”

Yokoyama, a forward for the Washington Spirit women’s soccer team and the Japan national team, came out as a trans man in a video posted Saturday to YouTube.
The tweet from Biden, coming during the waning days of Pride Month — an annual celebration of the LGBTQ community that takes place throughout June — is the latest example of the President’s support for LGBTQ Americans.
Biden’s administration has worked to undo some controversial policies made under former President Donald Trump, including last week, when the Education Department issued guidance that Title IX prohibits discrimination based on sexual orientation and gender identity, a reversal of the Trump administration’s stance that gay and transgender students are not protected by the law.
Earlier this year, Biden, during his address to a joint session of Congress, pledged his support for transgender Americans amid efforts by Republican-led legislatures to pass anti-trans sports bans, a policy that has already been enacted in eight states.

According to data from the Human Rights Campaign, at least 117 bills have been introduced in various state legislatures during the most recent legislative sessions that target the transgender community, the highest number the organization has recorded since it began tracking anti-LGBTQ legislation more than 15 years ago.