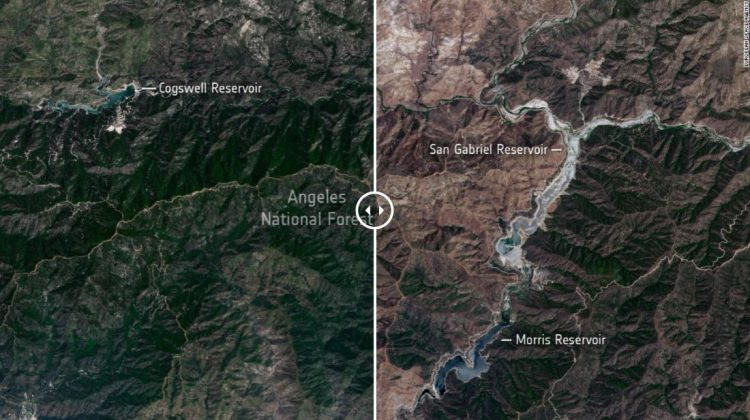 Between June 2020 and June 2021, Angeles National Forest went from green and lush to brown and parched. The water in three reservoirs — San Gabriel, Morris and Cogswell — has declined significantly. All of the reservoirs are outlined in brown in the 2021 shot, denoting how much the water level has dropped.

The European Space Agency shared the imagery of the forest, which is just north of the greater Los Angeles area, on its Facebook page earlier this week.
The entire state is in some level of drought, according to the US Drought Monitor. About 33 percent is in “exceptional drought,” the most severe category on the scale.

Water emergencies are expected in exceptional drought, along with severe and widespread crop and pasture loss. That’s exactly what millions of Californians are experiencing.

Gov. Gavin Newsom declared a drought emergency in April, then expanded it in May as conditions continued to deteriorate. One month later, nearly 2 million people in the San Francisco Bay Area were placed under a water shortage emergency.
Water in a key Northern California reservoir — Lake Oroville — is expected to fall so low this summer that its hydroelectric power plant will likely be forced to shut down for the first time since it opened in 1967.
The drought’s impact is even appearing in Sacramento’s drinking water, which lately has had an “earthy'” taste and smell, according to residents who have complained to the city’s utility officials. Low levels in reservoirs and rivers led to an increase in the concentration of geosmin in the water, one of two organic compounds that give dirt its characteristic smell. The water doesn’t taste or smell great, but officials are assuring residents it is safe to drink.