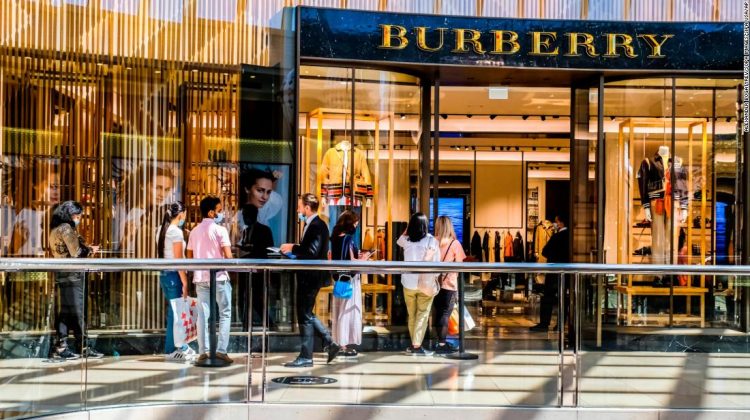 “Marco, who has led the transformation of Burberry’s brand and business, will be stepping down after nearly five years with the company to take up another opportunity that will enable him to return to Italy and be closer to his family,” Burberry said.

Gobbetti set out to reposition Burberry firmly in the luxury category, following a 13-year stint at French luxury goods giant LVMH (LVMHF) as CEO of Givenchy and Celine. As of Friday, the stock had gained 35% since his appointment in July 2017.
Known for its signature beige check and trench coats — which reflect founder Thomas Burberry’s belief that clothing should protect people from the British weather — the 165-year old brand equipped arctic explorers before becoming one of Britain’s most recognizable exports.

“Burberry is in a far better position today than when Marco took responsibility for it,” Bernstein senior research analyst Luca Solca said in a note to clients on Monday. “Yet, the magnitude of the issues at hand didn’t offer a chance for the runaway success that some had hoped for,” he added.

Gobbetti’s departure halfway through the company’s turnaround raises questions as to whether the brand could be in for another strategic reset under a new CEO, Solca told CNN Business.

“I think that investors also believe that if Marco was very self-assured of the success at Burberry maybe he wouldn’t be leaving,” Solca added, pointing out that Ferragamo is a “much smaller company.” He said that investors are reducing their holdings while they wait for further clarity on the new CEO and his or her plans.

Gerry Murphy, the company’s chairman, said that the board was “naturally disappointed’ by Gobbetti’s decision but understood “his desire to return to Italy after nearly 20 years abroad.”

Gobbetti caused a stir when he recruited Givenchy’s former artistic director, Riccardo Tisci, to be Burberry’s chief creative officer in 2018. The Italian replaced Christopher Bailey following his 17-year tenure at the company and was hired to reinvigorate the brand for a younger and more diverse consumer.

“Burberry was a bit boring before Gobbetti came in,” said Solca. “It needed a breath of fresh air.” Gobbetti’s ambition to make Burberry relevant in leather goods and compete with top luxury brands such as Gucci, Prada and Louis Vuitton is still a work in progress, Solca added.

Commenting on his departure in the statement, Gobbetti said: “With Burberry re-energised and firmly set on a path to strong growth, I feel that now is the right time for me to step down.”

In a separate announcement, Salvatore Ferragamo confirmed that Gobbetti would become the company’s CEO “as soon as he is released from his contractual obligations” at Burberry. Shares in Ferragamo advanced in morning trade in Milan, but were down 1.8% by afternoon.

Gobbetti’s new assignment is “another monumental challenge,” according to Solca. “The brand needs a thorough rejuvenation of its marketing fundamentals: product and communication, first and foremost,” he said.