Jens Weidmann has decided to step down after a decade as head of Germany’s central bank in a move that comes only weeks after the country’s general election and shortly before a crucial decision on the future of eurozone monetary policy.

Since he joined the Bundesbank, Weidmann has been one of the most vocal critics of the ultra-loose monetary policy pursued by the European Central Bank, where he fought an often lonely battle against its bond buying and negative interest rate policies.

Weidmann told Bundesbank employees in a letter that he had decided to step down at the end of the year, adding: “I have come to believe that more than 10 years is a good time to start a new chapter — for the Bundesbank but also for me personally.”

The move, less than two years after Weidmann’s mandate was extended for another eight-year term, comes as German political parties are still locked in negotiations to form the country’s first three-party ruling coalition.

Weidmann worked as an adviser to chancellor Angela Merkel before his appointment to run the Bundesbank in 2011 and his decision to resign means they look set to leave office around the same time.

Merkel’s centre-right Christian Democrat party had its worst-ever result in last month’s election and is set to go into opposition for the first time in 16 years.

As the longest-serving member of the ECB’s governing council, and one of its most “hawkish” voices in favour of a conservative approach to monetary policy, the 53-year-old’s departure opens the door to a potential further shift in favour of the central bank’s “dovish” majority.

Holger Schmieding, chief economist at Berenberg, said: “The new German government will likely appoint a less hawkish successor,” adding that it could choose Isabel Schnabel, Germany’s recent appointment to the ECB executive board, “or somebody with similar mainstream views”. 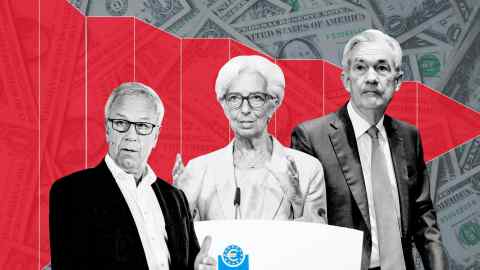 Weidmann’s planned departure comes as the ECB prepares for a vital meeting in December when it is due to decide how fast to wind down the huge stimulus package it launched in response to the pandemic and how accommodative its policies will be after that.

The Bundesbank boss recently warned that the ECB was in danger of underestimating inflationary pressures and said it could also be hard for the ECB to stop its bond-buying programme because of the role it played in keeping borrowing costs low for heavily indebted governments.

“It will be crucial not to look one-sidedly at deflation risks, but also not to lose sight of prospective inflation risks,” he said in Wednesday’s letter to Bundesbank employees. “And crisis measures, with their extraordinary flexibility, are only proportionate in the emergency situation for which they were created.”

Once dismissed by the former ECB president Mario Draghi as Nein zu allem — which is German for “No to everything” — Weidmann spent his early years openly criticising the ECB’s increasingly unconventional policies that flooded markets with cheap money.

But after Christine Lagarde took over as ECB president in 2019 and was quickly confronted with the Covid-19 crisis, Weidmann became less confrontational and even accepted its recent strategic overhaul, which allowed a temporary overshooting of inflation above its 2 per cent target.

Lagarde said in a statement that she respected Weidmann’s decision, “but I also immensely regret it”, adding: “Jens is a good personal friend on whose loyalty I could always count.”