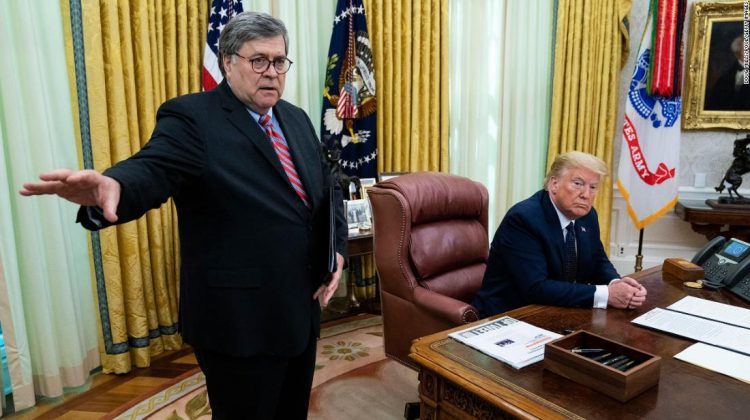 The excerpts also shed new light on Trump’s increasingly unstable mindset in his final year. They portrayed a president who was obsessed with self-serving conspiracy theories and surrounded by aides who knew he was delusional but were too afraid to tell him the truth.

Here’s a breakdown of the latest bombshells from the three books.

One set of revelations came from ABC News reporter Jonathan Karl and his book “Betrayal,” which comes out in November. Early excerpts were published in The Atlantic, with details of Trump’s unyielding attempts to have the Justice Department join his election subversion efforts.
Then-Attorney General William Barr was one of Trump’s staunchest allies, but he broke with Trump regarding the legitimacy of the 2020 election. Barr turned into a fact-checker of sorts, personally looking into some of Trump’s pet voter fraud theories, only to quickly debunk them as baseless. (Barr did this even though he often pushed similarly dubious claims before Election Day.)

Everything came to a head on December 1, when Trump summoned Barr to the Oval Office. According to the book, one of the attendees said a red-faced Trump had “the eyes and mannerism of a madman,” ranted and shouted at Barr, and even started banging on the desk.

The book bolsters recent reports about emails sent to top Justice Department officials by Trump (through his assistant) and Trump’s chief of staff, cajoling them to hunt for voter fraud. Trump responded to the excerpt by attacking Barr and doubling down on his false claims of voter fraud.

Weeks after Trump’s meltdown with Barr, his efforts to overturn the 2020 election results came crashing down when a massive mob of his supporters stormed the US Capitol on January 6.

A new book from controversial journalist Michael Wolff includes details of what unfolded inside the White House while the Capitol was overrun. The book, “Landslide: The Final Days of the Trump Presidency,” will be published July 27. Excerpts were published in New York magazine.
Trump’s senior advisers all knew Vice President Mike Pence would never go along with Trump’s unconstitutional scheme to nullify the results from states that Biden won when Congress met to formally count the electoral votes. They knew Trump was experiencing “derangement,” but were too scared to tell him that his dreams of overturning the election were hopeless, Wolff reported.
Instead, Trump was stuck in an fact-free feedback loop with his longtime attorney Rudy Giuliani, who led the unsuccessful effort to overturn the results at the local, state and federal level. And Giuliani led Trump even deeper into the election conspiracy theories, according to the book.
The book says Trump’s staff begged and pleaded with him to publicly disavow the violence at the Capitol. He waited for hours, and his daughter Ivanka Trump even allegedly said the attack was only “an optics issue.” CNN previously reported about Trump’s reluctance to call off the mob, including during a conversation that day with House Minority Leader Kevin McCarthy.

A new book from Wall Street Journal reporter Michael Bender describes how Trump wanted to invoke the Insurrection Act and use the military to quash social justice protests last summer, some of which descended into riots in large cities. The forthcoming book, “Frankly, We Did Win This Election,” is slated to be released on July 13. Axios reported some key excerpts Monday.
Bender reports that there was an unprecedented shouting match in the White House Situation Room between Trump and Gen. Mark Milley, the chairman of the Joint Chiefs of Staff. Trump exaggerated the level of violence, said he wanted to deploy the military into American cities and put Milley “in charge.” But he was quickly rebuked by Milley, in an expletive-laced argument.

“God damn it! There’s a room full of lawyers here. Will someone inform him of my legal responsibilities?” Milley said to the other officials in the Situation Room, according to the book.

Barr then told Trump that Milley was correct — he couldn’t do what Trump wanted him to do.

In response to the excerpt, Trump told Axios that the argument “never happened.” Bender said the incident was corroborated by “multiple senior administration officials” that he interviewed.