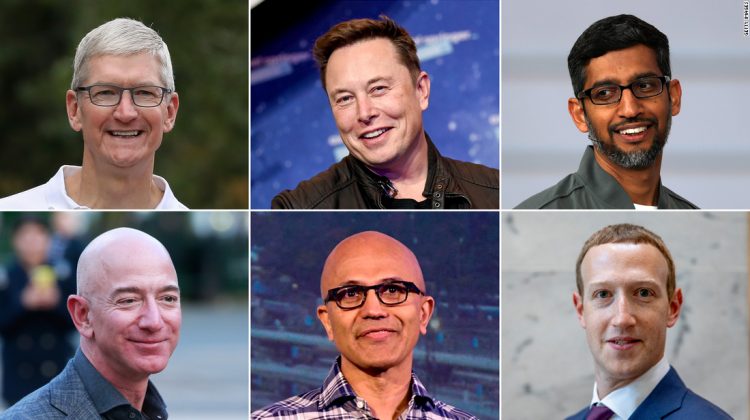 Facebook (FB) has soared almost 30% this year and Mark Zuckerberg’s social media giant is now worth more than $1 trillion. It’s not the only giant of the Nasdaq hitting new milestones.
Microsoft (MSFT) topped the $2 trillion valuation mark last week for the first time ever, joining Apple (AAPL) in that exclusive territory. Amazon (AMZN) and Google owner Alphabet (GOOGL), are nearing the $2 trillion mark as well.
Big techs had lagged behind other sectors earlier this year as Wall Street appeared to be betting that value stocks would finally outperform growth. But investors don’t seem all that worried that tech stocks are going to slow down any time soon, despite lingering concerns about increased regulation that lawmakers in America and abroad are trying to impose.
All told, the so-called FAANGs (Facebook, Apple, Amazon, Netflix (NFLX) and Google) plus Microsoft and Tesla (TSLA) are now worth $9.6 trillion. That’s about 25% of the total $38.4 trillion market value for all the companies in the S&P 500.
It may not be much longer before this tech septet (aka the Magnificent Seven of the Nasdaq) is worth a collective $10 trillion.
Some would argue that chip giant Nvidia (NVDA), which is now the most valuable semiconductor company in the United States, belongs in this group of high-profile techs, too. (Just call them the FAANNGs?)

Nvidia has a market valuation of just under $500 billion. So if you add it to the Nasdaq’s Magnificent Seven, you’re looking at eight tech companies worth about $10.1 trillion.

The case for an even longer bull market for Big Tech

This stunning run appears to be far from over.

“The big techs have longevity and can be leaders even if there are rotations into other sectors of the market,” said Chad Oviatt, director of investment management at Huntington Private Bank, which owns Microsoft, Apple, Alphabet and Amazon in various funds focusing on global blue chip stocks.

Oviatt noted that with long-term bond yields remaining relatively low, the tech giants will be able to continue borrowing money at a low cost to fund future growth opportunities such as acquisitions and research and development expenses.

He added that there could be lasting consumer and business behavioral changes that will benefit many top tech companies. More people are likely to work from home, either permanently or on a hybrid schedule.

Oviatt said big techs may also get a boost from the plans in Washington to spend more on infrastructure, especially as the government looks to invest in building out wireless 5G technology.

Another strategist agreed that this clear visibility for earnings and revenue growth in the tech sector helps explain the momentum for top tech stocks.

“Tech is still a good play for many investors and a critical part of a longer term portfolio,” said Jim Baird, chief investment officer of Plante Moran Financial Advisors. “We wouldn’t tell people to move out of the tech sector because there are some great names there.”

Baird added that he’s not overly worried that investors are too late to get into big techs either, mainly because earnings are growing at a rapid enough clip to justify their stock prices. He also thinks worries about this being a top for tech stocks are misplaced, mainly because the economy and earnings have rebounded so sharply from the big pullbacks of last spring and summer.

“Valuation peaks tend to come at the end of an expansion,” Baird said. “We’re not there yet.”