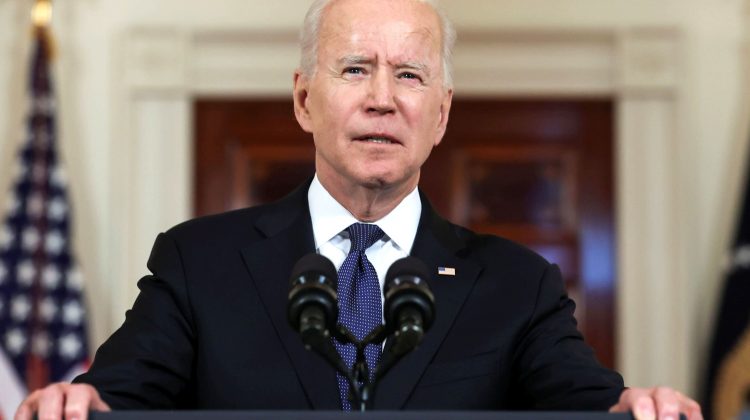 U.S. President Joe Biden delivers remarks before a ceasefire agreed by Israel and Hamas was to go into effect, during a brief appearance in the Cross Hall at the White House in Washington, May 20, 2021.

WASHINGTON — President Joe Biden will outline several actions that his administration is taking to curb the recent rise in violent crime and gun violence, ahead of a summer that experts worry could be especially deadly.

Biden will deliver remarks Wednesday after he hosts a meeting at the White House with state and local officials, members of law enforcement and experts.

Homicides spiked by 30% in 2020 over the previous year, according to FBI data provided by the White House, and the trend shows no signs of abating. In the first quarter of this year, the nationwide homicide rate was 24% higher than it was in the same period of 2020 and 49% higher than the same period in 2019.

Across the country, mayors and police chiefs have struggled to explain what’s behind the rise, but experts point to a perfect storm of factors that collided during the pandemic this past year.

Among them, a surge in private gun sales, widespread unemployment and months of stay-at-home orders and school closings that left people trapped inside with little to do.

Months of protests last summer and fall against police killings of Black people may have also diverted police resources away from traditional policing, while at the same time eroding public confidence in law enforcement.

Many of the factors believed to have contributed to the rise in violent crime are difficult to quantify. And given that policing in America tends to be highly localized, Biden’s options at the federal level are limited.

The actions Biden will announce are focused on tougher enforcement of federal gun control laws and on encouraging cities and states to make better use of federal coronavirus relief funding to combat gun violence, including by hiring police officers.

Instead of issuing warnings to gun dealers who ignore background check and sales laws, the Bureau of Alcohol, Tobacco, Firearms and Explosives will now seek to revoke dealer licenses on first offenses.

The move is intended to give new teeth to the enforcement arm of ATF, which has languished under a previous policy that prioritized compliance over punishment.

Another step Biden will point to on Wednesday is the creation of five new federal strike forces led by ATF to monitor and intercept firearm smuggling along several “significant gun trafficking corridors” between major cities.

The latest steps are in addition to a package of executive actions to confront gun violence that Biden announced in April. They included directing the Department of Justice to craft a rule addressing the spread of untraceable “ghost guns,” and to publish an example of “red flag” legislation for states to follow.

Other elements of Biden’s plan are beyond his control, because they require Congress, not the executive branch, to enact them.

Chief among them is the pending Senate confirmation of David Chipman, Biden’s nominee to lead ATF. Chipman is a former ATF agent and an expert on gun trafficking.

In addition to strengthening federal gun law enforcement, Biden will also draw attention on Wednesday to the administration’s position that the surge in gun violence is a pandemic-related crisis, according to a White House fact sheet.

As a pandemic-related crisis, cities and states working to combat the surge in gun violence will be encouraged to use the $350 billion in local pandemic relief funds approved by Congress this spring to fund violence reduction programs.

The American Rescue Plan funds can be used to hire more police officers, pay officers overtime, buy equipment and fund additional “enforcement efforts” to combat the spike in gun violence, according to the White House.

There are a few conditions, however. The first is that the funds must be used to advance “community policing strategies,” as defined by the Justice Department. The funds also cannot be used to build up public safety programs and/or police forces above their pre-pandemic levels.

While the funds are narrowly tailored to community policing, the idea that federal relief money is being used to hire more police officers could be a touchy subject among Democrats.

Ever since the murder of George Floyd in 2020 and the ensuing racial justice protests, some members of the Democratic party’s left flank have backed a movement to reduce the size and scope of police forces, and to replace law enforcement officers with social services counselors and crisis counselors.

Dubbed the “defund the police” movement by protesters who chanted the phrase, the push to fundamentally alter policing in America has divided some parts of the Democratic party.

Biden opposed the “defund the police” movement during his 2020 presidential campaign and Democratic legislators who are on the ballot in 2022 have largely avoided using the term.

On Wednesday, Biden will highlight some of these investments alongside the tougher enforcement pieces of his crime prevention plan.

For example, the Department of Labor recently announced an award of $85.5 million to help formerly incarcerated adults and young people find jobs, housing and support as they reenter society.