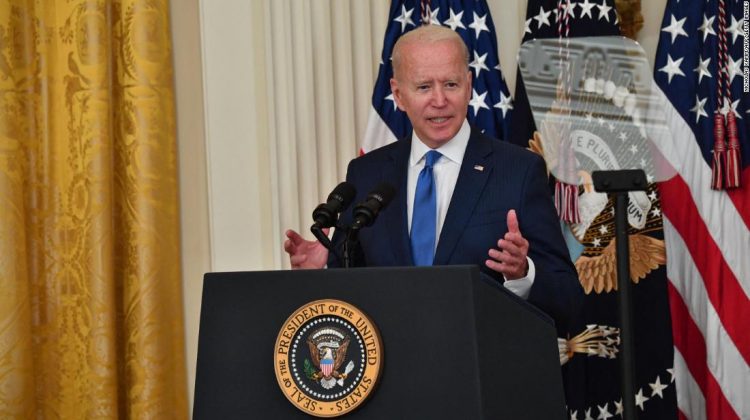 During his remarks in La Crosse, Wisconsin, the President is expected to talk about how the deal was a result of months of negotiations that brought Democrats and Republicans together. He’ll also stress how the investments from the plan — $1.2 trillion over eight years — would benefit those in small towns across the country and in rural America, “not just in the biggest cities on the coasts,” the official said.

It will be Biden’s first time pitching the bipartisan infrastructure proposal to the American people since nearly derailing the deal in off-the-cuff remarks last week. While speaking to reporters at the White House, Biden said he wouldn’t sign the bill he had just negotiated unless another sweeping proposal of Democratic priorities landed on his desk as well.

The White House spent days working behind the scenes to assure Republicans that Biden would support the deal, and the President then issued a lengthy statement over the weekend clarifying his remarks and said he would not veto the bill.

The White House refers to the plan as a “blue-collar blueprint to rebuild America,” and the President on Tuesday will argue the investments will grow the nation’s economy, create jobs and help the US keep pace with China in infrastructure investment.

Biden is expected to “cut through the noise in Washington to level directly with the American people about what this plan means for working and middle-class families around the country, and for the communities they live in,” the official said.

The President will stress the bipartisan nature of the deal and say it was “a process that brought both Democrats and Republicans together in good faith to deliver a set of investments that Americans from across the political spectrum agree is long-overdue,” the official said.

Biden will lay out the specific ways the plan would benefit those in Wisconsin, including replacing all of Milwaukee’s lead water service lines, bringing high-speed internet to the 82,000 children in Wisconsin that don’t have access to reliable internet and help address the 1,000 bridges in Wisconsin rated structurally deficient. The President will also tout how the plan would deploy 35,000 electric buses to school districts and create half a million electric vehicle charging stations around the nation.

Biden will also reiterate his commitment to delivering on his American Families Plan — a sweeping proposal of Democratic priorities that would invest heavily in education, childcare and paid family leave.

The fate of the infrastructure package in Congress remains uncertain. House Speaker Nancy Pelosi said last week the House won’t take up the bipartisan infrastructure bill until the Senate passes the Families Plan through budget reconciliation, which would only require Democratic votes. But Senate Minority Leader Mitch McConnell called on Democrats to back off of that plan and warned both efforts could collapse if they carry through with Pelosi’s goal.

A group of 11 Republicans signed onto the bipartisan infrastructure framework, but it is unclear whether they will all continue to stand by it. One member of that group, GOP Sen. Lindsey Graham of South Carolina, has warned he will vote against the bill if Democrats hold it up to get reconciliation done.

CNN’s Clare Foran and Manu Raju contributed to this report.