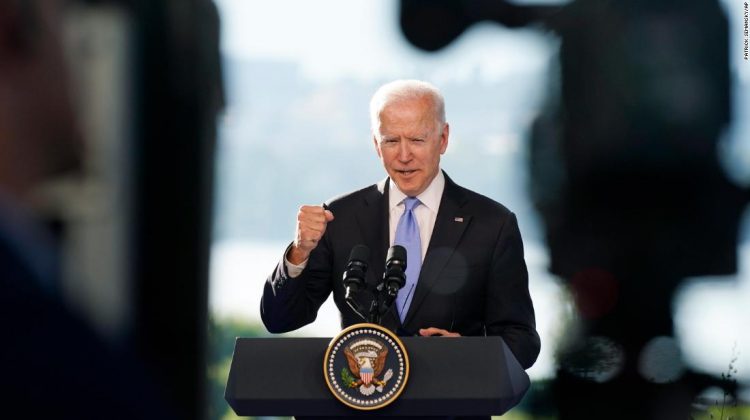 Biden is expected to address recent spikes in shootings, armed robberies and vicious assaults when he announces the details of the crime prevention strategy Wednesday afternoon during a speech at the White House. He’ll meet with state and local leaders ahead of his remarks.

Biden plans to sign executive actions with a particular focus on tamping down gun crimes, according to officials, while again calling on Congress to take steps to enact new gun control laws. Senior administration officials also told reporters Tuesday evening that Biden’s plan will rely on using American Rescue Plan dollars for more flexible applications, including hiring law enforcement above pre-pandemic levels or using the funds toward community violence intervention programs. Additionally, Biden is set to press Congress to confirm David Chipman as his nominee to lead the Bureau of Alcohol, Tobacco, Firearms and Explosives.

The President also plans on using the nationwide spike in crime as an opportunity to advance his argument for new gun control laws, even though calls made earlier in his presidency for Congress to take action prompted little action.

Agencies are also announcing a number of steps on Wednesday related to the strategy, senior administration officials said.

The Treasury Department will announce guidance that will highlight that communities experiencing a surge in gun violence as a result of the pandemic may use American Rescue Plan funds to policing-related efforts. The Office of Personnel Management will address whether to remove barriers for employment to formerly incarcerated individuals, and Housing & Urban Development Secretary Marcia Fudge will issue a letter that will address housing needs for formerly incarcerated individuals, including the use of 70,000 emergency housing vouchers funded by the American Rescue Plan.

Biden will also announce that the administration will convene and support a community violence intervention collaborative program in more than a dozen jurisdictions, according to a senior administration official. The jurisdictions are committing to using a portion of their American Rescue Plan funding or other public funding to increase investment in community violence intervention programs.

With the strategy, the President hopes to dampen what has already become a cudgel for Republicans eager to run a “law and order” campaign in next year’s midterm elections.

The announcement marks a moment for Biden to pivot the public narrative about his approach to crime-related issues, given his complicated past as an author of the 1994 crime bill and resisting pressure from the left to support defunding the police. And it also comes as bipartisan police reform legislation slowly moves its way through Congress.

After years of decreasing crime statistics, the homicide rate surged in major cities in 2020 and that trend appears poised to continue this year. Last weekend, there were 10 mass shootings across nine states that killed seven people and injured at least 45 others, according to data compiled by CNN and Gunviolencearchive.org.

During a call with reporters on Tuesday, officials repeatedly connected the rise in violent crimes to the pandemic.

“We know that the secondary consequences of the pandemic and the proliferation of illegal guns has led to increased violence over this past year and a half, including a 30% increase in homicides and 8% increase in gun assaults in large cities in 2020,” one official said.

A second official, when asked whether the White House would address links between rising crimes in cities to cities’ decisions to stop prosecuting low-level crimes, responded, “Our focus is on gun violence. That’s where the President’s focus is. That’s the problem we’re seeing right now.”

“Some crimes that are trending down, including property crimes and some low-level crimes — that varies by jurisdiction. But where we’re seeing the increase is in gun violence and that is why gun crime is the centerpiece here — the focus,” the official continued.

CNN’s Jeff Zeleny and Kevin Liptak contributed to this report.