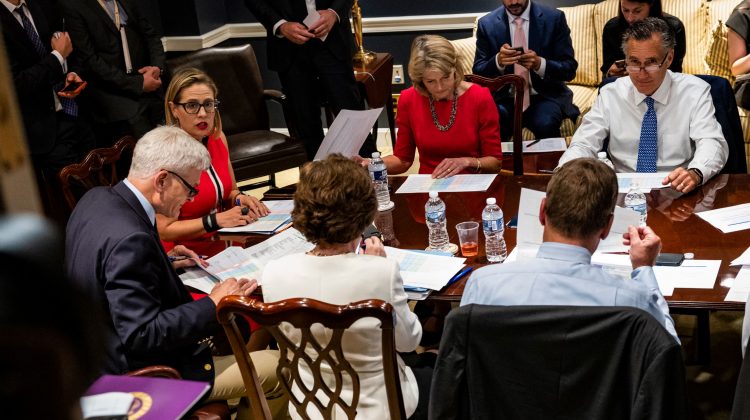 President Joe Biden invited Democratic and Republican infrastructure negotiators to the White House on Thursday, as senators say they have moved closer to a deal to revamp transportation, broadband and utilities.

“White House senior staff had two productive meetings today with the bipartisan group of Senators who have been negotiating about infrastructure,” White House press secretary Jen Psaki said in a statement Wednesday night. “The group made progress towards an outline of a potential agreement, and the President has invited the group to come to the White House tomorrow to discuss this in-person.”

The lawmakers have worked for weeks to craft a roughly $1 trillion infrastructure package that could get through Congress with support from both parties. Deciding how to pay for the plan has posed the biggest challenge, and the senators have not finalized how a proposal would raise revenue.

Twenty-one senators — 11 Republicans and 10 Democrats — have backed the infrastructure framework. They will likely need to win support from Democratic leaders in order to garner the 60 votes needed to pass the bill in the Democratic-held Senate.

Senate Majority Leader Chuck Schumer, D-N.Y., and House Speaker Nancy Pelosi, D-Calif., met with White House officials on Wednesday night. If they back the bipartisan framework, they could try to sell their caucuses on passing it before moving to approve a larger bill that addresses more of their priorities without Republican votes. The second package could include programs related to child and elder care, education, health care, and climate change.

The Senate has started to work on the budget resolution that would allow Democrats to use the reconciliation process to pass the plan.

“Both tracks — the bipartisan track, and the budget reconciliation track are proceeding in pace, and we hope to have voted on both of them in the Senate and House in July,” Schumer told reporters after the meeting at the White House.

Both of the congressional leaders agreed with Biden’s call not to raise taxes on anyone who makes under $400,000 per year, according to a White House readout of the meeting. The Biden administration has said it will not back an increase to the gas tax or an electric vehicle user fee as part of the bipartisan framework because it would break the president’s pledge.

Meanwhile, Republicans have fought the president’s proposal to hike the corporate tax rate to 28% from 21%. The GOP slashed the rate from 35% in 2017.

This story is developing. Please check back for updates.