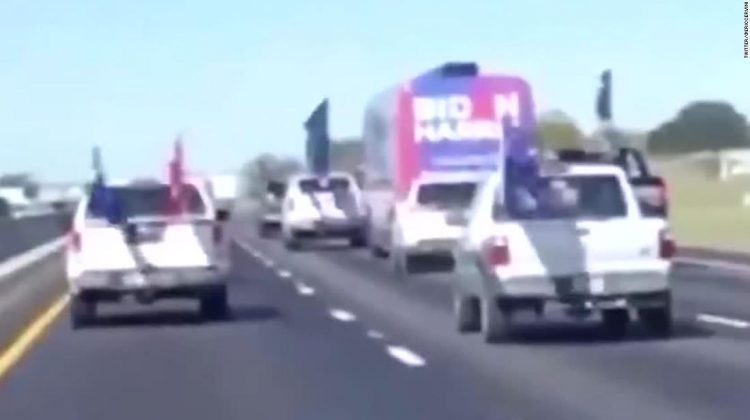 The complaint was filed on behalf White House staffer, David Gins; former Texas state Sen. Wendy Davis; former Biden campaign volunteer Eric Cervini; and the driver of the Biden campaign bus, Timothy Holloway. The plaintiffs wrote in their complaint filed in the Western District of Texas that on October 30, the Trump supporters “terrorized and menaced the driver and passengers on the Biden-Harris Campaign’s bus” for at least 90 minutes, forcing the bus to slow to a crawl on a major highway while swerving in front of the bus to block its path.

“They played a madcap game of highway ‘chicken,’ coming within three to four inches of the bus,” the lawsuit alleges. “They tried to run the bus off the road,” referring to the defendants.

The complaint alleges that the defendants — named as Eliazar Cisneros, Hannah Ceh, Joeylynn Mesaros, Robert Mesaros, Dolores Park, and a Jane and John Doe — conspired beforehand to surround and block the bus in violation of the Ku Klux Klan Act, passed by Congress in 1871 to prohibit the obstruction of free and fair elections via the coordinated intimidation of voters. As a result of their actions, they claim, the campaign was forced to cancel its stops in San Marcos and Austin out of fear for their safety.

CNN has reached out to the defendants in the suit. None of them have been criminally charged in the incident

According to the complaint, Gins, Davis and Holloway were on the bus at the time and Cervini was in his own car escorting them. Biden and Harris were not on the bus that day.

The complaint also draws a line between the events of that day and the January 6 riot at the Capitol. The complaint notes that some of the individuals who were involved in planning the Trump Train incident on October 30 were also in Washington the day of the deadly insurrection. The complaint also notes members of the New Braunfels Trump Train were identified in media reports and on social media has “having taken part in the January 6, 2021 insurrection.”

It is not the first time the Klan Act has been invoked this year in connection with acts carried out by Trump supporters before and after the election. Democratic Rep. Bennie Thompson of Mississippi, chairman of the House Homeland Security Committee, filed a lawsuit against Trump in February accusing him of inciting the January 6 riot and violating a provision of the Ku Klux Klan Act that prohibits political violence and intimidation that could impede federal officials from performing their constitutional duties. Jason Miller, a spokesman for Trump, said the former President did not incite or work to incite riots at the Capitol.

The FBI opened an investigation after footage of the highway confrontation, filmed by onlookers and Trump Train members themselves, emerged that on social media. An official familiar with the matter said the incident remains under investigation.

The same plaintiffs are suing San Marcos, Texas, law enforcement officials and employees in a separate lawsuit alleging that they violated another section of the Klan Act by failing to prevent or respond to the harassment.

Davis, who at the time was serving as a Biden campaign surrogate, filmed the incident from the inside of the bus.

The previously unseen footage, which was provided exclusively to CNN, shows several vehicles with Trump flags surrounding the Biden campaign bus, cutting in front of it, and abruptly braking to slow the bus down as it traveled from San Antonio to Austin for a campaign event.

Davis’ recording also shows one truck with Trump flags — allegedly driven by Cisneros — sideswiping a campaign staffer’s SUV as they accompanied the bus. “That was me slamming that f—er….Hell yea,” Cisneros later posted on Facebook.

“Though I’ve been involved in many political campaigns for myself and others over the past couple of decades, I have never before experienced the threat or fear I felt when the ‘Trump Train’ surrounded our bus,” Davis told CNN. “I’m a part of this suit because I’m worried that this sort of dangerous behavior threatens to become the new normal if we don’t stop it.”

The plaintiffs are being represented by lawyers with the nonprofit advocacy organizations Protect Democracy and the Texas Civil Rights Project, as well as the law firm Willkie Farr & Gallagher LLP. Cameron Kistler, counsel for Protect Democracy and one of the lawyers on the case, is also an expert on the KKK Act, which he has called a “potentially powerful weapon for litigators seeking to protect the integrity of federal elections.”

“As soon as the Biden-Harris Campaign made plans for the Bus Tour public, members of the Alamo City and New Braunfels Trump Trains began planning to intercept and intimidate the bus as it traveled through Bexar, Comal, Hays, and Travis Counties on October 30,” the complaint reads, pointing to Facebook posts by Alamo City Trump Train members beginning on October 28.

The lawsuit also points to an October 28 video posted on Twitter by then-President Trump’s son, Donald Trump Jr., encouraging Trump Train members to “get together and head down to McAllen and give Kamala Harris a nice Trump Train welcome.” President Trump later tweeted out a video of the highway skirmish with the caption, “I LOVE TEXAS!”

In several cases, the participants did not hide their involvement. Many of them — including one of the defendants in the lawsuit, Hannah Ceh — live-streamed the incident on social media using the hashtag #operationblockthebus, according to screenshots included in the complaint.

Another defendant, Dolores Park, streamed two live videos to Facebook, the complaint states, where she said, “This Biden bus is surrounded! Like seriously surrounded by Trump flags!” and “If my husband sees me like this, he’s going to kill me for driving like this!”

The plaintiffs argue that, in addition to violating the Ku Klux Klan Act, the Trump Train members engaged in civil assault, “intentionally and/or knowingly” threatening the plaintiffs “with imminent bodily injury by engaging in aggressive, dangerous, and reckless driving that put Plaintiffs and others on I-35 in physical danger.”

Gins, who now serves as deputy director for operations in the Office of the Vice President, had volunteered to work on the Biden-Harris Inaugural Committee in the runup to January 20, according to the complaint. But he backed out after the events of January 6 because of “anxiety about the security aspect,” he said in a text message at the time and wrote that he had been “a little traumatized” by the Biden campaign bus incident, according to the complaint.

“The experience of those 90 minutes on I-35 is something I will carry with me for the rest of my life,” Gins told CNN. “Elections are partisan and can get heated, but we cannot allow violence to become part of our great democracy. If you resort to violence, the law will hold you accountable for your actions.”

Holloway said that “after a long career as a bus driver, the Biden-Harris bus was the last one I ever drove.”

“I am suing because my civil rights were threatened,” he told CNN. “I don’t want other people just trying to do a job to have to fear for their lives simply because they were hired by a political campaign. As a Black man, I’m not a stranger to voter intimidation and political violence. It’s happened throughout history. It happened in Texas. It happened on January 6. We need our political leaders to take this threat seriously and help end it now. I’m doing my part with this lawsuit.”

Cervini said he received “literally thousands of threatening messages” in the days following the incident.

“It made me fear for my family’s safety, especially after I witnessed how aggressively the Trump Train went after the Biden-Harris bus, and how San Marcos law enforcement failed to come to help,” he said.