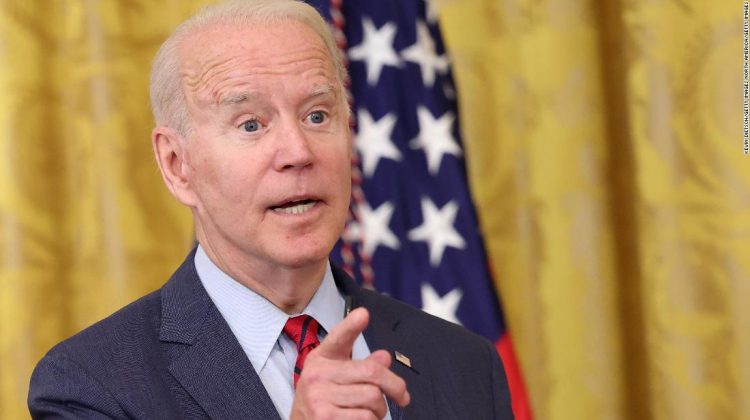 The President can at least now look those who voted for him in the eye and tell them that so far he has delivered on a promise to suck the venom from politics and create space for lawmakers of goodwill to work.

After a succession of presidencies scarred by disconnects between the Oval Office and congressional leaders, and when democracy itself was attacked by ex-President Donald Trump, Biden is effectively offering a moment of national relief. The sight of the President surrounded by Republicans and moderate Democratic senators outside the West Wing on Thursday was a vision he had spent months invoking on the campaign trail that skeptics had doubted would happen.

To voters who chose the oldest President in US history and hoped he would restore some calm, moderation and normalcy to Washington after the volcanic Trump years, this may prove to be a powerful image.

Still, getting a deal on infrastructure is far from passing it in Congress. It’s possible that the complicated formula Biden will use to do so — pairing it with a multitrillion-dollar spending plan to attract progressives — actually contains the seeds of the agreement’s destruction. And peace is far from breaking out all over Washington. Just this week, Republicans in the Senate killed a massive voting rights bill. And the party remains in the thrall of a former President who incited an insurrection rather than leave office peacefully.

But in the East Room of the White House on Thursday afternoon, Biden reflected on the deal, and conjured a fleeting picture of a functional Washington, working in a way that hasn’t happened for years.

Asked by a reporter if he could guarantee the votes would be there, Biden launched into one of his regular discourses on his political philosophy.

“I don’t have any guarantee. But what I do have is a pretty good read over the years of how the Congress and the Senate works,” Biden said, laying out a give-and-take theory of government that contrasts with the absolutism in both parties in what is a deeply ideological age. He defended concessions in what was originally a bill worth more than $2 trillion as essential to securing some of what he wanted — for instance, in funding for Amtrak.

The President, who spent decades in the Senate, also showed generosity to political opponents who stand against much of his ambitious domestic agenda but for whom the differences aren’t personal.

“Mitt Romney has never broken his word to me,” Biden said, of the senator from Utah and former Republican presidential nominee whom he and then-President Barack Obama defeated in a bitter 2012 election.

“You know, the senator from Alaska (Lisa Murkowski), … the senator … from Maine (Susan Collins), they’ve never broken their word. They’re friends. The people I was with today are people that I trust. I don’t agree with them on a lot of things, but I trust them when they say, ‘This is the deal.’ “

Critics on both sides over infrastructure deal

The biggest threat to Biden’s deal may be time. With several summer congressional recesses looming, it will take extraordinary dexterity by Senate Majority Leader Chuck Schumer and House Speaker Nancy Pelosi to muscle the infrastructure measure through Congress. In Washington, the longer a compromise waits to be enshrined into law, the more likely it is to fall apart.

Some liberal Democrats are dismayed that Biden ceded so much to Republicans. Sen. Richard Blumenthal, a Connecticut Democrat, called the deal “paltry” and “pathetic” in an interview with CNN’s Manu Raju.

Republicans, meanwhile, are balking at the pairing of infrastructure with the huge spending plan Democrats will try to pass by a simple majority in the 50-50 Senate. If only one bill makes to his desk, Biden said, “I’m not signing it.”

Senate Minority Leader Mitch McConnell quickly accused the President of caving to his “left-wing base” in comments that raised serious doubts for the prospects of the delicate compromise.

“Less than two hours after publicly commending our colleagues and actually endorsing the bipartisan agreement, the President took the extraordinary step of threatening to veto it,” McConnell said.

The Kentucky Republican has made no secret of his desire to thwart Biden’s presidency as he seeks to win back the Senate majority in midterm elections next year. So the temptation to deprive Biden of a win will be intense.

But Republicans also have a decision to make. Backing the deal could deliver to their constituents as well. Crumbling roads, bridges, airports and coastal defenses don’t distinguish between conservatives and liberals. McConnell could also defuse Democratic midterm election accusations of total obstruction if he lets the $1.2 trillion infrastructure deal become law. But GOP senators are likely to face fierce pressure from pro-Trump media to wound Biden. And it may prove unpalatable for many of their members to back an infrastructure bill moving with a $6 trillion progressive wish list.

On the other hand, it will give them a chance to renew their attacks on Sen. Bernie Sanders-style “socialism” on the midterm trail — a fact White House press secretary Jen Psaki may have had in mind when she mentioned to Jake Tapper a spending bill closer to $4 trillion.

Biden: ‘My party is rational’

The other leg of the rickety legislative stool on which the compromise rests is the internal cohesion of the Democratic Party itself. Both Pelosi and Biden threw their support behind the spending deal — which will require the use of a budget maneuver known as reconciliation to bypass GOP filibuster tactics in the Senate.

That appeared, in the short term, to appease progressives. Democratic Rep. Alexandria Ocasio-Cortez of New York, who will be a vital voice in selling the plan, told CNN’s Ryan Nobles that the “assurance goes a really long way.”

The bill is expected to include items like tens of billions of dollars for home health care, an expansion of federal health benefits and money for affordable housing. Many of the programs were included in Biden’s original jobs and infrastructure plan and were removed to win Republican support.

Sanders, who is writing the measure and heads the Senate Budget Committee, is likely to go further than even Biden’s ambitious plans — and his price tag is already raising concerns among moderate Democrats like West Virginia’s Sen. Joe Manchin. Every single Democratic senator must vote for the spending bill in the Senate for it to pass. If it doesn’t, Pelosi said she’s not bringing up the infrastructure measures in the House.

At a progressive rally on Thursday on Washington’s National Mall, Sanders referred dismissively to the “so-called bipartisan bill,” but he promised his bill would be the “most consequential bill for working families in the modern history of this country.”

Despite the deep differences within the Democratic Party — and unease with Biden’s openness to Republican ideas — the President is betting that logic will prevail.

“My party is divided but my party is also rational. If they can’t get every single thing they want but all that they have in the bill before them is good, are they going to vote no? I don’t think so,” he said.

Such a view is consistent with the President’s belief that for all its dysfunction and polarization and despite the assault on truth and fact that has overwhelmed it in recent years, the US political system can still work.

It’s a long-shot bet few other top politicians would make, and it will likely determine the success of his presidency.