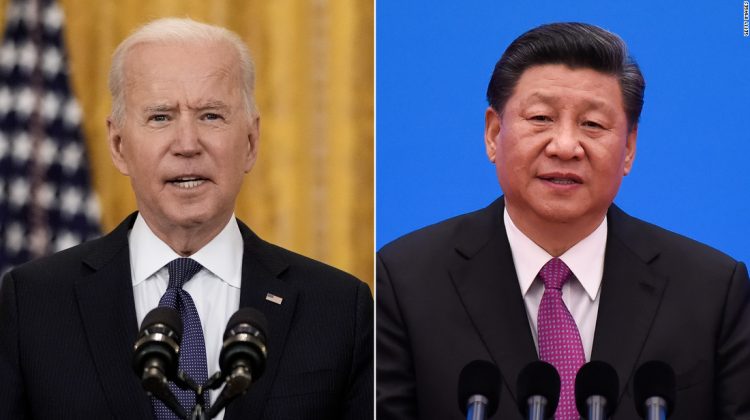 White House officials say the two could meet in the coming months, possibly on the sidelines of the Group of 20 summit in Rome at the end of October, which both are expected to attend. They’ve also left open the possibility of a separate meeting, if China agrees, or simply another telephone call.

“It’s now just a question of when and how,” Biden’s national security adviser Jake Sullivan said last week of an engagement between the US and Chinese leaders.

Already, China has taken an interest in Biden’s approach. In the days since Biden sat down with Vladimir Putin in Geneva, Russia updated China on what happened inside the talks. When Russia’s ambassador to the US returned to Washington this week as part of an agreement struck during the presidents’ meeting, one of his first stops was debriefing his Chinese counterpart on the Biden-Putin summit.

With the Putin summit now in the rearview mirror, White House aides said work toward setting up a meeting with Xi would ramp up. The Putin sit-down provided an opportunity to directly address a series of near-term issues in an relationship that officials viewed as having grown dangerously toxic. But it served a dual and important purpose: it set in place a series of mechanisms to address those issues at the staff level over several months, something officials see as an opportunity to clear the decks for the issue that more than any other issue has singularly animated Biden’s approach to the presidency since he took office, one official said: China.

If it does materialize — and questions remain about China’s willingness to meet — a Biden-Xi summit could help set the course for what will amount to the most consequential foreign policy issue of Biden’s presidency.

Biden, along with his aides, believe Xi’s accelerating efforts to consolidate power in China make a direct meeting an imperative.

“We believe increasingly that part of what President Xi has done is taken steps to put him as the central leadership figure in China that makes almost all of the decisions,” said Kurt Campbell, Biden’s top adviser on Asia-Pacific issues, during an appearance at the Washington think tank Center for a New American Security earlier this month.

“I think it’s clear to say there is a smaller and smaller group of people that work with President Xi on that decision making and it’s always a question of whether you’re able to effect the inputs that President Xi is receiving as China makes its calibrations about the best approach to global politics,” Campbell said.

Already, talks between China and the Biden administration have gotten off to a contentious start. An early meeting between officials in Alaska devolved into tit-for-tat statements that only came to illustrate the deep level of mistrust that exists between the world’s two largest economies.

Some American officials also questioned the influence of the Chinese diplomats who were dispatched to Anchorage for the meeting, viewing them far outside Xi’s inner circle.

Since then, relations have not significantly improved. New questions about the origins of the novel coronavirus, and China’s unwillingness to allow a full investigation into where the pandemic began, have only exacerbated matters.

Still, Biden remains convinced of the power of personal relationships to help steer international relations. And like with Putin, he believes talking face-to-face can help stabilize a relationship in ways talking on the phone cannot.

“There is no substitute, as those of you who have covered me for a while know, for a face-to-face dialogue between leaders. None,” Biden said in Geneva.

In some ways, officials say Biden’s objectives with Xi would be the same as they were for his three-hour sit-down with Putin in Switzerland: to break the ice, take stock of each other and open lines of communication that can only be forged in person. US officials frequently cite the need for establishing “guardrails” in the relationship with China, just as Biden sought to establish with Putin the parameters for a more predictable relationship with Russia.

Biden has also adopted a similar strategy of rallying allies behind an approach to counter Chinese aggression, just as he consulted western allies before his meeting with Putin. American officials are currently working to arrange an in-person meeting of leaders from the Quad grouping for the fall, a gathering that would bring the prime ministers of Japan, India and Australia to Washington for consultations ahead of a potential meeting with Xi.

Yet for all the similarities to his approach with Putin, Biden views the stakes as far higher with Xi. While he laid down firm lines with Putin on human rights and cyberwar, the disputes with China exist on a grander scale. Trade, military aggression in Taiwan and accusations of genocide being waged on Uyghur Muslims have placed the two countries at sharp odds.

If Biden regards Russia as a nagging threat to US stability, he sees China as a far more existential problem, aides say. Biden’s top advisers have carefully calibrated their language — stressing that China represents a central strategic competitor and pushing back on comparisons to a new Cold War. It’s not a trivial matter — rallying some allies with existing economic ties to the country are in large part contingent on not amping up the rhetoric. But it’s clear, particularly when he’s riffing on the issue, that the “autocracy versus democracy” framing of his presidency holds China as its principal target.

Since taking office, Biden has spoken to Xi only once by telephone, in February. The conversation stretched two hours, and Biden at one point warned Xi that it was a mistake to predict the United States’ demise based on incidents like the January 6 insurrection attempt.

In ways large and small, China has provided the backdrop of his administration, from the coronavirus pandemic to infrastructure negotiations to persistent questions about American democracy. The President has argued that a robust economic recovery is the best way for the United States to retain its strength abroad.

“There are a number of dimensions in our approach to China that may not have China in the label,” a US official told CNN. Domestic success, in the eyes of Biden and his team, is a crucial component of demonstrating the strength of an administration pushing to re-assert itself on the global stage — and bring key Western allies along with it.

Even in Europe last week, China — not Russia — was the dominant point of discussion at Group of 7 and NATO summits ahead of Biden’s meeting with Putin in Geneva. Even with the Russian president, it was on the agenda; Biden said ahead of the summit that Russia was “getting squeezed by China.”

In the United Kingdom and Brussels, Biden nudged European leaders at each stop to take a harder line on Beijing’s human rights abuses, economic practices and military aggression. He met some resistance from German Chancellor Angela Merkel and Italian Prime Minister Mario Draghi, and concluding statements taking aim at Chinese human rights abuses were a notch below what the US had hoped.

But he did succeed in putting China on the agenda in ways it has never been previously. The G7 leaders raised concerns about forced labor in the western Xinjiang province and the autonomy of Hong Kong. They also agreed to launch a global infrastructure program designed to counter China’s Belt and Road Initiative, though did not detail specific financial commitments. And they called for a new investigation into the origins of Covid after an initial probe by the World Health Organization faced stonewalling in China.

A final NATO statement also referenced China for the first time, and the defense alliance’s secretary general said the “balance of power” was shifting eastward.

“China is coming closer to us. We see them in cyberspace, we see China in Africa, but we also see China investing heavily in our own critical infrastructure,” NATO Secretary General Jens Stoltenberg said. “We need to respond together as an alliance.”

US officials acknowledge it will be a long-term effort, one that top administration officials will need to press on in some cases and delicately balance in others, as Biden pushes forward in keeping allies with differing equities aligned. But the early returns from his first foreign trip, particularly given the willingness by the President, with the support of his national security team, to step out on the issue in the private meetings, were viewed as a positive initial signal by administration officials.

The response was harsh from Beijing, which alleged the G7 statement “deliberately slanders China, and arbitrarily interferes in China’s internal affairs.”

“We are strongly dissatisfied and firmly opposed to the sinister intentions of a few countries such as the United States,” China’s embassy to the UK said.

Despite the bluster, Biden comes to a meeting with Xi with one advantage: he has spent more hours in Xi’s company than with any other current world leader. He is fond of recalling the thousands of miles the two traveled together when both were their countries’ vice president. And he frequently cites something he told Xi during over dinner on the Tibetan plateau: that America can be summed up in the word “possibilities.”

Still, the two men are far from close. During last year’s campaign, Biden asserted Xi didn’t have a “democratic bone in his body.” And in Europe last week he sought to dispel the notion he was personally close to the Chinese leader.

“Let’s get something straight,” Biden said at the conclusion of his summit with Putin when a reporter questioned him about meeting Xi. “We know each other well; we’re not old friends. It’s just pure business.”