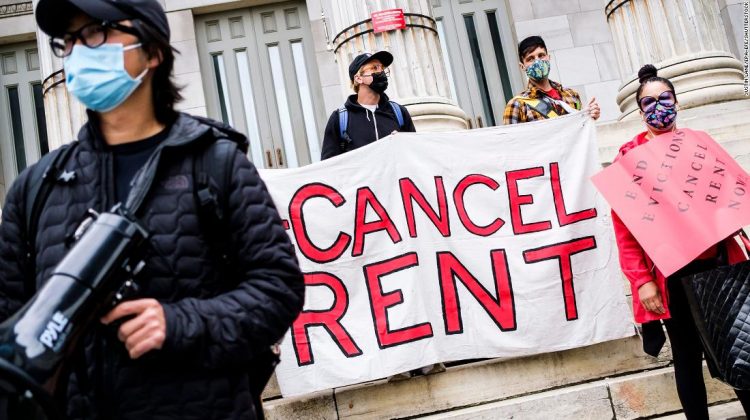 The extension, which is expected to come from the US Centers for Disease Control and Prevention that issued the order, is anticipated ahead of the June 30 expiration of the current order as vaccination rates slow and the effects of the pandemic continue to linger.

President Joe Biden had been pressured by Congressional Democrats to keep the moratorium in place as the nation continues to emerge slowly from the pandemic. Administration advisers discussed the matter over the past week and decided that another month without evictions is needed to get the billions of dollars in federal assistance funds distributed to renters.

The Treasury Department is expected to issue new guidance on distributing billions of dollars in housing assistance that was included in the Covid relief package passed this spring.

This will mark the fourth time the deadline for lifting the ban has been pushed back. The CDC’s order first went into effect last September and initially was set to expire at the end of 2020. But then, in December, the protection was extended until the end of January. As one of his first acts in office, President Biden called on the CDC to extend the ban until March 31. That deadline was pushed until the end of June.

While the challenge for much of the past year has been that there was not enough relief money to cover the back rent owed by tenants, an unprecedented amount of emergency rental assistance is now available. The current challenge is getting it to the people who need it before the eviction protection expires.

Have the money, need the time

Nearly $50 billion in federal rent relief money has been earmarked for renters through federal stimulus, including $25 billion from the December stimulus and $22 billion from the American Rescue Plan Act in March.

“Watching this impending eviction wave is hard because the solution is available,” said Diane Yentel, head of the National Low Income Housing Coalition. “The money to address the arrears is available. It is enough money. We just need more time to get it to the landlords and tenants that need it.”

Yentel said extending the moratorium is the right thing to do. “Allowing evictions to proceed when there are tens of billions in resources to prevent them would be wasteful and cruel,” she said.

“An extension provides immediate relief for six million families behind on rent and at heightened risk of eviction this summer, and gives states and cities more time to both increase vaccination rates in marginalized communities and get emergency rental assistance to tenants who need it to stay stably housed,” Yentel said.

Some states like Texas are getting money out quickly with 37% of its emergency rental assistance funds issued, Yentel said. But other states, like Arizona, have issued less than 4% of their funds.

Other states have taken the process into their own hands, like California, where Governor Gavin Newsom is pushing the state legislature to approve a plan to use $5.2 billion in federal pandemic relief money to pay 100% of unpaid rent owed by low-income residents.

Overall, pandemic-related economic hardship peaked in mid-December 2020, according to data from the Center on Budget and Policy Priorities based on US Census surveys, and fell sharply in late March, following stimulus packages and continued improvement in unemployment. But throughout the pandemic, hardships like falling behind on rent have disproportionately impacted renters of color.

“Until the rental assistance reaches the tenants and the vaccination rates are higher, there needs to be eviction protection in place,” said Yentel.

The extension puts many landlords, particularly mom-and-pop landlords, beyond the end of their rope.

“Each passing month further escalates the risk of losing an ever increasing amount of rental housing, ultimately jeopardizing the availability of safe, sustainable and affordable housing for all Americans,” said Bob Pinnegar, the president and CEO of the National Apartment Association, a trade association for apartment owners and operators.

While some housing advocates have criticized landlords who refuse to accept rental relief money and instead opt to wait out the moratorium so they can evict tenants, Greg Brown, senior vice president of government affairs for the National Apartment Association said this narrative is the exception.

“We have members who are several hundred thousand dollars in the hole,” said Brown. “There is nothing left. They are telling me they need to get paid in 90 days or they are going to have to sell their property or foreclose. There are many owners for whom the rental assistance will save the day.”

Court cases challenging the eviction moratorium continue to work through the judicial system, with each side claiming some victories and seeing some setbacks.

The federal ban on eviction provides protection to struggling renters who have given their landlord a declaration that they are unable to pay rent. They must agree to make their best effort to pay what they can.

But the moratorium is not rent relief. Once the ban is lifted, renters will be expected to pay their entire back rent or set up a payment plan with their landlord. Otherwise, they could face losing their home.

What both sides can agree on now is rent relief.

“If tenants are back to work and have cash flow again, that may set them up to pay rent in the future, but you still need the relief to pay the arrears,” said Brown. “The people who feel this the most are the small owners. Their income is the rental properties they have. They are the folks who are taking the most pain and suffering from the brunt of this experience. That’s why we need this assistance.”