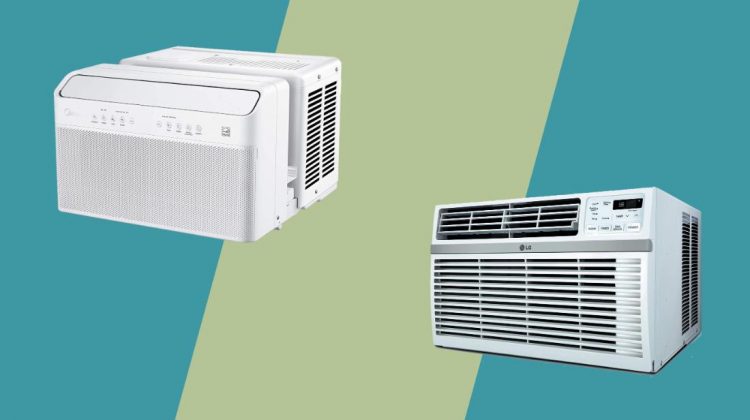 More affordable and practical than central air, and a huge leap from an oscillating fan simply blowing hot air around, a solid air conditioner can be a saving grace. Though on the surface they may all look the same, window ACs bring a good bit of nuance. Even those boasting the same cooling capacity (measured in British Thermal Units) will differ in terms of how long they take to cool a room, the features they offer and ease of installation.

Over the course of a month, we tested six of the top models currently on the market (all with a cooling capacity of 8,000 BTU, the ideal option for a mid-sized room). Keeping those aforementioned nuances top of mind, after all was said and done, two stood out from the rest:

The Midea’s U-shaped design is more than just a funky aesthetic choice. Not only does it make installation of this appliance a cinch, but it keeps the compressor outside with the window acting as a noise barrier, so it’s much quieter compared to the other ACs we tested. It cooled the room not only more quickly than any other AC we tested, but also more effectively thanks to a motorized vent that automatically moves to waft cold air throughout the room. Though not the cheapest option, the Midea was far and away the best AC we tested.

LG’s LW8016ER is a bare-bones unit. There’s no fancy design or smart functionality. It simply performs the primary function of any AC: It cools a moderate-sized room quickly, rivaling much more expensive units. The 8,000 BTU AC is $279.99, and is the perfect option for those looking for a classic, easy-to-use AC that effectively cools a room.

What might seem a tad ostentatious at first, Midea’s U-shaped design actually serves as an effective upgrade to the classic box-shaped ACs we’ve seen in windows for eons. That design delivers more than surface-level aesthetics: It also reduces noise and aggravation.

Installation is much less backbreaking than with any other AC we popped in our windows. Although like most standard ACs, you’ll want to have a partner to help heave this 55-pound unit into place. But you’ll save some effort with the Midea, as it doesn’t require the traditional left and right pull out sides that need to be drilled into the window. You’ll screw the T-shaped bracket into the bottom of the window frame, but then installation of the unit is simply centering the Midea on the bracket, closing the window and popping in the included insulation on either side. (The Midea got bonus points for including more shapes and sizes of insulation than any other AC.)

Since the window is able to close more and the compressor sits outside, the Midea is noticeably quieter inside the room; its high fan mode made about as much noise as the low fan mode on other ACs we tested. Put simply: There’s a smaller window of entry (pun most certainly intended) for sound to enter the room. You’ll hear it, but at most, it’s a slight hum, a notable improvement over the loud roar of most units when the compressor kicks in. And to ensure our ears weren’t deceiving us, we measured all the ACs with a decibel meter, and the Midea registered the lowest reading.

We were able to cool an 80-degree room to 68 within 45 minutes on “Auto” mode. A majority of the other ACs we tested, including our budget pick, took an hour or more to reach this threshold. There also wasn’t much of a wait for the Midea to actually start cooling the room. That’s a big plus, especially on sweltering nights when you don’t want to wait another minute for cooling relief. The compressor kicks in almost instantaneously, compared with the others that could take a few minutes.

The Midea’s cooling prowess is aided by its main vent, a motorized flap that will automatically move up and down to cool your entire room. It feels like something out of “Space Odyssey,” but it’s more effective at cooling since the airflow isn’t static.

Holding the unit’s Wi-Fi button pairs the Midea with its companion app, which is the best of the models we tested and works on both Android and iOS. The app enables you to control the temperature, set the mode and adjust the top flap for airflow. You can even sync the Midea with Amazon Alexa, so if you have an Echo or an Alexa-enabled smart speaker, you can ask Amazon’s assistant to turn on the AC or raise the temperature.

The LG LW8016ER may sport the age-old box design — no bells and whistles here — but it still offers everything you need in an AC.

Installation is classic window AC: You’ll install the left and right side with four screws (two on each side) and then lift the LG LW8016ER into place. As with any AC, they weigh about 50 to 60 pounds (this LG weighs 58 pounds), so we’d again recommend a team lift. And you’ll need to hold the AC as you close the window on top of it.

Once in place, this LG unit performed just as well as the smarter, more expensive ACs we tested. As we tested all the ACs, we let the room hit 80 degrees before switching the AC on. The LW8016ER took about an hour to reach 68 degrees on “Auto” mode. While this LG was a bit slower at cooling a room than the Midea, it was pretty much on par with all the other models we tested.

It’s not as loud as some of the other units in our testing pool, but it’s certainly not quiet, as you’ll hear the fan and compressor going. It also rattled the window and its frame in our tests, adding to the noisiness. We recommend the unit’s eco-mode overnight, since it’s a bit more judicious with the fan speeds, though this doesn’t dampen the sound all that much. As with the Midea and other ACs tested, we recorded the noise level with a decibel meter. The LG was on the lower end, but still resulted in more noise being captured compared to the Midea.

Since no smart features are built in, controlling the unit is limited to the set of buttons on the LG LW8016ER or its tiny remote. Several modes are available, including a timer. The remote is infrared, so you’ll need to point it at the AC, but it’s actually quite handy and gives you access to the core controls. It’s perfect for when you don’t want to get out of bed to make adjustments.

While the LG doesn’t feature a motorized vent, the main one has two swivel handles that allow you to adjust it top-down or side-to-side. It’s easier and smoother to control compared with others, which allows you to make more minute adjustments as to where the air will flow: old-school functionality at its finest.

After deciding on our testing pool for window ACs, we focused on designing a testing protocol that would focus on real-world use cases. All the units we tested were 8,000 BTU in order to compare apples to apples.

We broke the categories down as such:

The smart variant of our budget pick performed admirably. While it provided control via the LG ThinQ for Android and iOS, including all core functions and even a schedule, it didn’t integrate with smart home ecosystems, like the Midea did. This next step up also didn’t deliver a faster cooling experience or a reduction in noise created.

Along with the other Frigidaires we tested, the FFRE083wa1 proved to be a compact window AC with a legacy design. The fan is in the relative center, there’s an accessible filter under the front grill and a compressor in the back. It’s an unassuming design, but we preferred the more minute vent controls on LG. The Frigidaire FFRE083wa1 also was noticeably noisy, which made it tough to focus on much else while in the room with it on.

The FHWW083wb1 introduces the Frigidaire app for Android and iOS for smart controls. The setup took longer but ultimately provides an easy way to control the AC —- albeit with some delays. The FHWW083wb1 was on par with the more affordable Frigidaire and cooled our test room from 80 degrees to 68 in about an hour and 15 minutes. For the price, you’re much better off losing the smart controls for a quieter setup with the LG, or spending a bit more for an all-around better unit with the Midea.

This Gallery model from Frigidaire was the most expensive of all the models we tested, and it was able to quickly cool the room with a time close to the Midea. It runs on the same smart ecosystem as the other Frigidaire and features a slightly more mounded design with softer plastics. Similar to the LG and Midea, there was a multi-directional main vent, which was helpful for pushing the air in one direction. And while Frigidaire claims this to be the quietest, the LG and Midea proved to lower the volume even more. It seems to be a case of paying the price for a brand name with some novel features, but in our testing, the U-Shaped Midea outshined this model on almost all fronts.