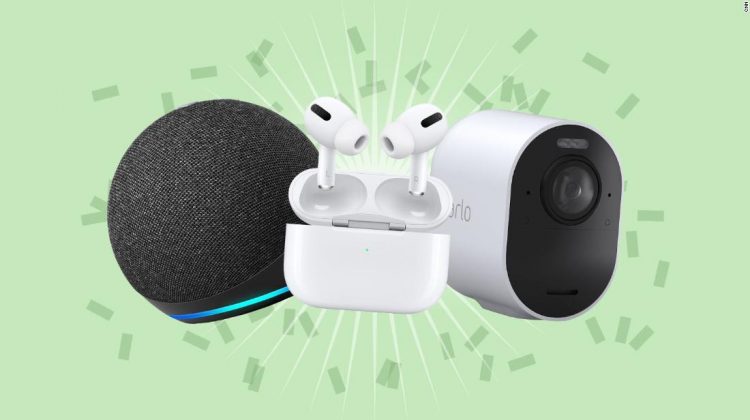 Whether you’re looking for a smart speaker, like an Amazon Echo or a Sonos One, or a massive TV to upgrade your home entertainment setup, Prime Day is here to deliver on some epic tech deals.

We’ll be working hard throughout the day to curate the best of the best — the biggest discounts on the class-leading tech that you’ll want to add to your collection.

AirPods Pro mix a stellar design with rich sound and active noise cancellation (ANC) that can effectively cancel out all the noise around you. They’re really that good, and they’re our top pick of earbuds for Apple users. At $189.99, it’s not an all-time low, but this is a really good deal.

If you want to spend less than less than $50 on a pair of earbuds that meet the mark, look no further than the EarFun Air. We declared these our best budget earbuds with strong sound, a comfortable fit and very long battery life.

Our top pick for best over-ear and noise-canceling headphones is at their lowest price ever. Sony’s WH-1000XM4 are just $248, down from $349.99, in your choice of black, silver or blue. These headphones mix comfort with world-blocking ANC and nearly 30 hours of battery life.

Our best earbuds for working out and running are seeing a mighty fine discount. Jabra’s Elite Active 75t are down to an all-time low of $119.99. These earbuds get a lot right, like a comfortable fit with sweat resistance, class-leading noise cancellation and long battery life.

Amazon’s second-generation Echo Buds get a lot right and end up delivering value. They feature noise cancellation, strong sound that can be customized with an EQ and some of the best microphones we’ve tried on earbuds. Better yet, they’re down to an all-time low starting price of just $79.99 this Prime Day.

Not only is the latest Echo our pick for best smart speaker, but it’s down to an all-time low price of just $59.99. With three speakers inside, Echo can fill even large rooms with rich and crisp audio. Of course, you get instant access to Alexa out of the box too.

The latest Amazon Echo Dot lets you ask Alexa to do just about anything — from checking the weather to controlling your smart home — all within a sleek spherical design. Our pick for the best budget smart speaker, the fourth-generation Echo Dot is 50% off and at its lowest price yet (you can also get the Echo Dot With Clock for $25 off).

At an all-time low of $64.99, you really can’t go wrong with the Fire HD 8 Plus. As our budget tablet pick, it handles reading, web browsing, light gaming and emails with ease. The 8-inch display gives you plenty of room for binge-watching your favorite shows as well.

The new Echo Show 8 made a serious upgrade this year, and its midsize design makes it perfect to keep on your desk or in your kitchen. The device now has a faster performance and an improved camera for better-quality video calls. The Echo Show 8 is the ultimate media hub, supporting applications including Zoom, Netflix and Spotify.

We found the Echo Show 10 to be a great smart display that has all of the powers of Alexa complete with a big, rotating screen that can help keep you in view during video calls. It’s a bit of an investment at full price, but this lowest-ever Prime Day price makes it a great value.

Amazon’s futuristic Alexa-enabled glasses are seeing a sharp discount down to $174.99. Echo Frames look like normal glasses and feature built-in microphones so that Alexa can take your requests. Speakers are built into the frames and point right to your ears for personal listening.

The Eero 6 is our favorite mesh Wi-Fi router, thanks to its simple setup and wide, consistent coverage that can boost the Wi-Fi signal all throughout your home. This kit, which gets you a router and an extender, is an especially great pickup at an all-time low price of $129.

We found the Ring Video Doorbell Wired to be a great value, offering many of the key features of Ring’s higher-end video doorbells (such as 1080p video and custom motion alerts) within an affordable and compact package. And it’s an even better buy now that it has hit its lowest-ever price of $44.99.

The Ring Alarm is our pick for the best home security system, thanks to its easy setup, responsive alarms and smooth compatibility with other smart home devices. And it’s currently at a steep discount, starting at just $119 for a five-piece kit (ideal for apartments) all the way to $199 for a 14-piece kit (ideal for bigger homes)

Whether you want to back up your data with ease or just need more storage, the WD My Passport SSD is powerful enough to handle the task and is our overall pick for best external hard drive. Better yet, it’s down to its recorded lowest price.

The Blue Yeti is our pick for the best computer microphone, delivering excellent audio quality for meetings, podcasts and Twitch streams complete with four handy recording modes for both solo and group settings. We’ve seen the Yeti’s price drop a bit lower than this, but it’s still an excellent sale price on a superb mic.

This is a huge discount on our favorite high-end webcam, which delivers excellent 1080p picture quality that will make you look vibrant under any lighting conditions as well as 60 frame-per-second recording that’s perfect for smooth streaming.

While the Switch Lite is smaller than the Switch, it still plays nearly all the same games and comes in better colors. Plus, you’re scoring it with a 128GB microSD card that is just begging to be filled with games.

You can always use new Joy-Con controllers, whether you want to personalize your Switch with snazzy new colors or just need more gamepads for family Mario Kart night. You can currently score a pair in a variety of fun shades for a nice $69 — that’s $10 off and the lowest these things usually drop to.

One of the best games for the PlayStation 5, Spider-Man: Miles Morales makes an excellent showpiece for Sony’s new console with stunning 4K graphics, smooth frame rates and near-instant load times. This is the lowest price yet we’ve seen for the Ultimate Edition, which also gets you a copy of Marvel’s Spider-Man Remastered.

As one of the most popular gaming laptops on the market, this discounted Razer Blade 15 is one of the better Prime Day deals we’ve seen so far. With a 10th Gen Intel Core i7-10750H processor and Nvidia GTX 1660 Ti graphics built for serious gaming within a thin and compact build, the laptop has exceeded many gamers’ expectations, and it shows in all of the 5-star reviews.

It doesn’t get much better than typing on a mechanical keyboard. And this Logitech G915 TKL model is a strong option with punchy keys, a compact design and customizable lighting. And it’s $50 off for Prime Day.

The Roku Ultra gives you access to thousands of streaming services — all at up to 4K resolution — in a slim package that doesn’t pry your eyes away from the big screen. It’s our pick for best overall streaming device, and is back to its lowest recorded price.

Our pick for best soundbar, Roku’s excellent soundbar features a low profile, powerful audio and smart pairing capabilities that are on par with much more expensive models.

The best HomeKit smart plug we’ve tested, the Wyze Plug can turn any household gadget (such as your coffee machine or lamp) into a smart device that can be turned on and off via Alexa or Google Assistant. While we’ve seen its price drop even lower, this handy plug is a no-brainer at $18.

Our choice for the best portable ring light clips directly to your phone for a glow on the go. It’s a perfect choice for upping your TikTok or selfie game.

With three cameras on the back and a bevy of capture modes, the Galaxy S21 has one of the best cameras we’ve tested on a smartphone. For $599.99, an all-time low price, you really can’t do much better. It’s powered by a fast chip that makes Android seamless and has a large 6.2-inch display.