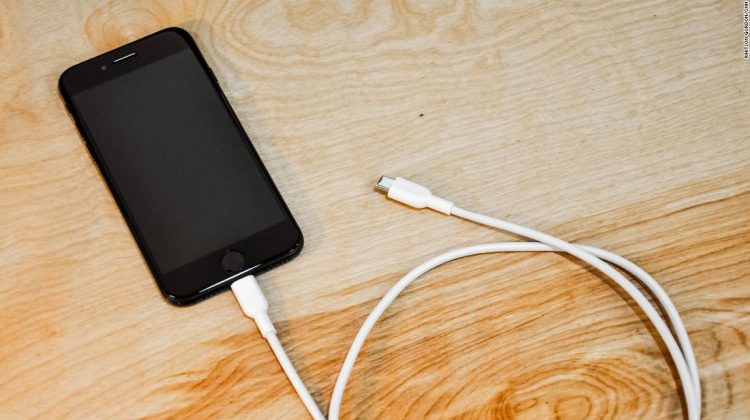 You probably don’t give much thought to the cable that charges your iPhone. But the right charging cable can charge your phone faster, hold up against fraying and coil beautifully in your bag for tangle-free storage. CNN Underscored spent the last few weeks testing 15 of the most popular Lightning cables so you can ditch the old, frayed fire hazard in your bag and pick up a charger that’ll stand the test of time — and only one Lightning cable we tested stood out.

It doesn’t get much better than Anker’s Powerline II cable. It’s extremely affordable, charges quickly and is more durable than Apple’s own cables. Plus, it comes with a lifetime warranty should anything go wrong.

Anker’s Powerline II is a basic cable that does everything well, without any bells and whistles that increase the cost. The 6-foot cable does come in three colors, though: white, green and black — alongside a 3-foot version that comes in white and black.

The Powerline II uses the same rubber shielding as most other cables, albeit a bit thicker than Apple’s offering, with stronger joints. We stress tested the cables with some hard tugs and some tight bends, and it felt like it would hold up well over time, where other cables might break down and fray at the ends. It’s flexible enough to easily coil loosely while also being stiff enough that it won’t fall apart and tangle in your bag as easily as some flimsier cables, and it even comes with a small Velcro cable tie. The Lightning end is small enough to fit in the opening of all the phone cases we tried, and both ends fit snugly into their respective sockets, without wiggling or loosening in their housing.

Most importantly, the Powerline II is also MFi Certified, which means it’s met Apple’s quality testing for the iPhone, iPad, AirPods and other products. This is crucial, since cables that lack Apple’s certification may not work as well, and may even damage your device — so buying from a reputable, MFi Certified company is much preferred to the cables you get in the pharmacy checkout line. Oh, and we’ve owned multiples of this exact Powerline II cable for years, so we can speak to its quality and longevity personally.

Anker also offers a USB-A version that we tested, and if you don’t have any USB-C chargers, that would be a suitable alternative. That said, we recommend the USB-C cable for most people. Not only is USB-C the future — Apple and many PC manufacturers have moved to it exclusively on their laptops — but it has the ability to charge your phone faster than USB-A. With a compatible USB-C power brick, Anker’s USB-C to Lightning cable in our testing charged an iPhone 8 or later to 50% in about 30 minutes. You can see more about which iPhones and iPads are compatible on Apple’s Fast Charging page.

The USB-C cable will also charge older iPhones and iPads, and while they won’t necessarily charge at the same rate as fast charge-capable devices, we found in our testing that they can charge slightly faster than a USB-A cable. On our old 9.7-inch iPad Pro — which is not compatible with new fast charging standards — Anker’s USB-C cable charged the iPad to 50% about 15 minutes faster than its USB-A sibling. In fact, we found all the USB-C cables we tested to be faster than their USB-A counterparts on this old iPad, so it’s worth going USB-C even if your device isn’t compatible with fast charging — after all, your next device probably will be.

While Anker’s cable is plenty durable for average use — and comes with a lifetime warranty in case of problems — there are other, more durable cables on the market for those with more active lifestyles. Anker’s Powerline II+ line, for example, comes with a braided shield and more color choices for a few extra bucks. If you have more serious durability needs, Nomad’s cables are second to none, thanks to a strong Kevlar-reinforced design and seriously thick joints. And if you’re looking to solve the problem of the cable consistently falling off a desk or a nightstand, Native Union deserves a look. The brand offers a unique cable with a weighted knot on the end so it won’t fall off your table.

Over the course of a month, we tested each of these cables with our iPhone 7, iPhone 8 Plus and 9.7-inch iPad Pro using a number of different metrics. Most important to a charging cable is, of course, its ability to charge and transfer data at a reasonable rate. So we used each cable in conjunction with a 65-watt power adapter to charge our devices from dead to 50%, timing the result. We also used them to transfer a 1.5GB video file from our computer to the device using iTunes, timing the process as well.

Thankfully, all of our MFi Certified cables performed comparably in both scenarios — on fast charging devices, all the USB-C cables we tested charged to 50% in around a half hour as promised by Apple, with all the USB-A cables taking longer but performing within a few minutes of each other. Data transfers were also similar, with every cable taking roughly the same amount of time to transfer data to both our iPhone and our iPad. As such, we were able to mostly eliminate charge and data transfer speeds from our evaluation, with the exception of the differences between USB-C and USB-A (USB-C was a bit faster, even on our non-fast-charging iPad Pro, than USB-A cables). The Native Union cable was the only cable to exhibit noticeably slower charging speeds, most likely due to its length, which was significantly longer than the other cables we tested.

That left most of the competition battling it out for design. While we weren’t able to do months- or yearslong testing with each cable to determine how it’d hold up over time, we evaluated each cable’s build, joints and flexibility, along with a bit of bending and tugging to search for any obvious weak spots. We noted the length of warranty for each cable — after all, no matter how well a cable is built, some users will encounter issues, and the manner in which a company deals with problems is just as important as how they build their products.

While Anker offers the best bang for your buck, Nomad’s USB-C cable actually scored highest in our testing for its outstanding design and durability. Shielded with a double-braided Kevlar sheath, Nomad’s cable felt thicker and stronger than every other cable we tested, without losing too much flexibility in the process. It comes with a rubber cable tie for coiling it up neatly, and its joints were easily the most robust of the bunch — with a five-year warranty to boot.

If you want the best cable you can buy, Nomad’s Lightning to USB-C cord — and its Lightning to USB-A version, which we also tested — are second to none. Their $40 price tag was too high for us to recommend to everyone in all scenarios, and it’s more suited for heavy travelers who want the boost in luxury and durability.

Belkin’s USB-C to Lightning cable is another decent option for a cable on the premium side. Made with what Belkin calls “DuraTek,” this cable uses a soft braided sheath with unique speckled connectors on the end.

It also comes with a leather snapping strap for coiling the cable, though our model was already flaking when we took it out of its brand-new box, which didn’t inspire a ton of confidence. Belkin also offers a USB-A version of this cable in a few lengths and colors, though we didn’t test that version ourselves.

After publication, Belkin sent us another cable, which exhibited no fraying out of the box. They tell us this isn’t a common issue, and they’re looking into it.

Anker’s latest cable is called the Powerline III Flow, no doubt because of the cable’s unparalleled flexibility. Unlike the typical hard rubber you tend to find in charging cables, the Powerline III flow uses an incredibly soft silica gel, and flexes freely in a way no other cable we tested could match.

The brand also claims the cable is its most durable yet, despite its flexibility — and it seemed to stand up to normal use in our tests. It comes in both 3-foot and 6-foot variants, with five colors to choose from — though unlike Anker’s other cables, it only has an 18-month warranty. Our top pick, the Powerline II, offers a lifetime warranty.

Everyone knows the frustration of unplugging a cable from your phone only to have the cable fall off the end of the table into the abyss behind your desk. Native Union’s cables attempt to solve this problem with a weighted knot that you can slide along the cable to keep it in its place. It’s incredibly practical, and very stylish, thanks to the braided shield that comes in multiple colors and patterns.

There’s just one downside: Native Union only seems to offer these cables in 10-foot lengths, which charged our test devices five to 10 minutes slower than more typical 4- to 6-foot cables. If speed isn’t of the essence, though, the practical design here may be well worth that small sacrifice. There is a USB-C version for faster charging as well, though we didn’t test that model ourselves.

If you like the idea of braided, durable cables but prefer the more affordable price point, Anker’s Powerline+ II cable is a great compromise. It costs a few bucks more than the standard Powerline II cable, but for that extra money you get a braided sheath and a few extra colors to choose from — with the same stellar lifetime warranty as Anker’s other cables. We tested the USB-A version, though there’s also a USB-C version available for faster charging.

Belkin’s standard BoostCharge cables are similar to Anker’s Powerline II — no frills, just good cables at a good price. They use the same standard rubber sheath you’d find on other cables in this price range, and the same standard joints.

We did find Belkin’s cables to be a bit more flexible than Anker’s slightly stiffer offering — but with only a two-year warranty, we thought the Ankers were a better buy for just about everyone. Belkin offers these cables in both USB-C and USB-A variants.

Apple’s own Lightning cables are thinner and more flexible than the competition, with extremely small connectors on the end. These may seem like boons, but Apple’s own cables have also earned a reputation for being easier to break and fray — so while both the USB-C and USB-A cables performed well in our tests, we think most people would be better off with a more durable option from a third party.

Mophie’s USB-C and USB-A cables offer a braided design in three different lengths, but otherwise didn’t stand out much from the competition — they’re thinner than Anker’s cables without being more flexible, and the warranty lasts only two years. But they performed well in our tests, so if you like the design, they’ll do the job.

Satechi’s cable is clearly designed to be a durable monster, similar to Nomad’s Kevlar cables. However, while the Satechi performed just as well as its competition in charging and data transfer, we found it much stiffer than every other cable we tested, without the extra-strong joints of the Nomad cables. It’s a good option — we just prefer the more flexible nature of the other cables we tested.