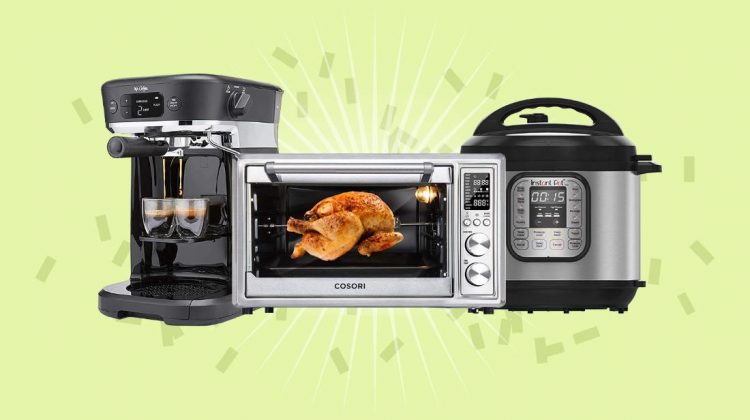 From air fryers and rice makers to blenders and Instant Pots, Amazon often has the best sales on must-have kitchen appliances — both big and small. Prime Day is no different, with tons of discounts on those gadgets that can make anything from food prep to delicious coffee much, much easier. Below, we’ve rounded up the best Prime Day kitchen appliance deals to shop right now.

You can now get all the magic of an Instant Pot, which can be used as anything from a pressure cooker to a slow cooker and rice cooker, for just under $55, its lowest price ever. The Instant Pot Duo Nova is also now marked down to the lowest price we’ve seen in months at just $49.99, and you can consider it more of a beginner’s model to the one above.

Lots of other Instant Pot appliances are discounted up to 50% off too here.

You can score up to 35% off Keurig coffee makers and pods this Prime Day, with the K-Slim Coffee Maker now matching its lowest price ever at just under $50.

Cosori air fryers are up to 30% off this Prime Day, with deals that include its Amazon-favorite 5.8-quart air fryer that has more than 13,000 5-star reviews and allows you to cook up anything your heart desires with a few clicks on your smartphone. It’s currently marked down to the lowest price we’ve seen in months.

There’s no doubt about it: Nugget ice is the best type of ice. And now you can attain this coveted ice type at home with the GE Opal Nugget Ice Maker, now down to its lowest price ever at $449. Not to mention this machine features everything from a compact, portable size to Bluetooth connectivity.

Whether you’re new to the SodaStream world or you’ve been making your own beverage blends for ages, the brand has something for you, with discounts on machines and bundles, including flavor drops now up to 40% off.

There are plenty of SodaStream bundles also now marked down to their lowest price ever, including this one that comes with the water maker, two CO2 cylinders, three carbonating bottles and two different Bubly drops.

From air fryers and stand mixers to griddles and toaster ovens, there are tons of amazing Dash kitchen appliances on sale right now. But the one we’re most excited about? This egg cooker that can get your eggs absolutely perfect every time, whether you want them hard-boiled, soft-boiled, poached, scrambled and more. You can even make little individual omelets in this thing.

Ninja knows what it’s doing when it comes to kitchen appliances, and today you can save on a multitasking Ninja Foodi Air-Fry Oven, a Ninja Foodi 9-in-1 Deluxe XL Pressure Cooker (which also features air-frying capabilities) and a Ninja Auto-IQ Blender and Food Processor.

Currently, the pressure cooker is marked down to the lowest price we’ve ever seen.

Oster has discounted a bevy of its products for Prime Day, including its convection oven that’s now less than $75 and an electric wok. But by far its most popular discounted product right now is its electric wine opener.

Currently marked down to its lowest price ever, this not only seamlessly opens up any bottle of wine, but it also comes with a foil cutter, two vacuum stoppers and an aerating wine pourer. Even if you’re not a wine aficionado, this is worth the buy.

Toshiba is having major sales across its most popular appliances, including its cult-favorite microwave, toaster oven or toaster oven/air fryer combo. All priced under $100, the microwave oven has more than 13,000 5-star reviews, and is a No.1 bestseller in the microwave category. And now at just under $60, it’s marked down to the lowest price we’ve ever seen.

See? You really don’t have to splurge on Prime Day, even if you are trying to buy a kitchen essential. This handy cold brew maker is an Underscored reader favorite, and it’s now marked down to its lowest price ever.

If you’re looking for basic kitchen essentials, look no further than Amazon Basics’ kitchen deals. Appliances like kitchen scales and kettles are all on sharp discounts, as well as things like air fryers and coffee makers.

Nespresso Vertuo Next Coffee and Espresso Machine by De’Longhi

Nespresso’s single-serve coffee makers are up to 45% off this Prime Day. This bundle comes with the the brand’s milk frother, single-serve maker that can brew up coffee and espresso and 30 coffee capsules. And because of Prime Day, it’s now marked down to its lowest price ever.

Top kitchen brand Cuisinart has discounted its amazing rainbow knife set and top-rated convection toaster oven, but what we’re really here for is this ice cream maker that can make 2 quarts of any frozen dessert of your liking in as little as 25 minutes. Just think of the possibilities.

A wide range of miscellaneous kitchen needs are marked down, including toaster ovens and cold brew makers, from top brands like Chefman and Hamilton Beach. We’re particularly excited about the reusable silicone Stasher bags on sale — read more about them in our full review here.