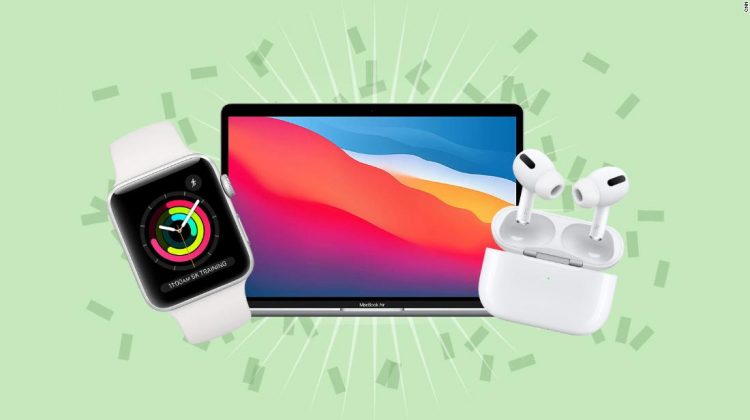 Apple has kept busy thus far in 2021, launching two new iPad Pro models, the all-new iMac and a brand-new Siri Remote, to name but a few of the biggest hitters. All of these new devices, along with classics like the MacBook Air, Apple Watch and eighth-generation iPad, are seeing good discounts for Prime Day 2021.

Apple’s entry-level iPad is really the best option for most people, and it’s our pick for best overall tablet. It features a large 10.2-inch display, which is perfect for sketching, streaming your favorite movies and for browsing the web. Like all other iPads, it’s running iPadOS and supports multitasking.

The iPad Air fits comfortably in any purse, backpack or suitcase — perfect for anyone working on the go. It boasts a lightweight and portable design without compromising display quality and processing speed. The versatile tablet comes in five colors: black, white, deep navy, cyprus green and pink citrus.

If you walk into an Apple Store or visit Apple.com, AirPods Pro will cost you $249.99. Right now you can score them for $189.99, and that’s a significant savings from the MSRP. It’s not the lowest price we’ve ever seen, though.

AirPods Pro are our pick for earbuds for Apple users, and their hallmark feature is best-in-class noise cancellation. This way you can easily engage the model and block out the world around you. They also feature Adaptive EQ for a terrific sound experience, “Hey Siri” support, fast pairing with Apple devices and a comfortable design.

Standard AirPods might not be as feature-filled as AirPods Pro, but they are Apple’s first wireless earbud. And while they still look like original AirPods, they’re now in the second generation. That means “Hey Siri” support, better sound with improved bass, fast pairing and strong connectivity.

Right now AirPods with a standard charging case are down to $119 from $159.99. If you really want wireless charging support, those are on sale for $149.99 from $199.99. Either way, you’re getting the same second-generation AirPods with the improved features.

If you already have AirPods — first or second generation — but would like the added bonus of a wireless charging case, Apple has a solution for you. It makes a new case with the required technology inside. It’s also a solution for getting a squeaky-clean case. It’s on sale for $66.99 right now.

You’ve likely at least heard of Apple’s $549 over-ear AirPods. They’re in the upper echelon but are designed from high-end materials (aluminum ear cups) and paired with a tremendous amount of tech inside.