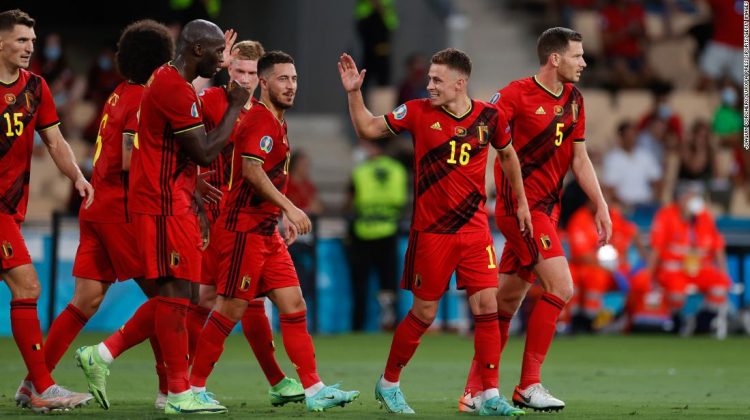 Hazard, who plays for German side Borussia Dortmund, hit a swerving shot from 25 yards which deceived Rui Patrício in the Portugal goal and knocked the reigning champions out of the tournament.

Portugal had opportunities to draw itself level, with Raphaël Guerreiro striking the post and Ruben Dias forcing a good save from Thibaut Courtois in the second half.

However, it proved all in vain, as Belgium advanced to the quarterfinals where it will face Italy in Munich on Friday.

“In these kinds of games you have to grab your chances with both hands,” Hazard said afterwards.

“And voila, the goalkeeper expected me to choose the other corner, so the ball went in. I am happy I could score for my country!”

When the last 16 match-ups were named, the clash between these two footballing giants was one of the fixtures fans were circling with the long list of top-quality players potentially on show.

From Cristiano Ronaldo to Romelu Lukaku, the stars were on display in Seville.

But despite the attacking options on the pitch, the first half was a cagey affair, with chances few and far between. Diogo Jota blazed over the best opportunity to break the deadlock early on.

However just a few minutes before the break, Hazard — the younger brother of Real Madrid star Eden — took matters into his own hands.

Picking up the ball on the corner of the Portugal box, he sliced across the ball, causing it to swerve and wrong-foot goalkeeper Patricio.

His goal meant he’s scored in consecutive games for Belgium for the first time and has scored four goals for Belgium since Eden last scored for the national team.

The only dampener on a glorious evening for Belgium will be when Manchester City midfielder Kevin De Bruyne was forced off with an apparent injury minutes into the second half.

With the lead, Belgium looked dangerous on the counterattack as Portugal pressed for an equalizer.

As the game got scrappier, so the challenges got more rash as players stretched every sinew in an attempt to win back possession.

A late challenge from Pepe caused both benches to rush onto the pitch as things got heated. The Porto defender received a yellow card for his efforts.

Portugal, with its tournament hopes on the line, was held to just a few chances with Guerreiro and Dias coming closest, but to no avail.

The win means that Belgium has lost only one of its last 27 international matches and is unbeaten in its most recent 13 international fixtures.

Visit CNN.com/sport for more news, features, and videos
“In the first half we were playing high and putting pressure on Portugal, but looking at that second half, we are lucky to win,” Belgium defender Thomas Vermaelen said afterwards.

“Portugal made it really hard for us. We had to really stay focused. It has cost us a lot of energy, but we have some time to recover and now we are looking forward to the game against Italy.”

Now the No.1 ranked team will face Italy in Munich’s Allianz Arena, as two of the tournaments’ most in form teams do battle.