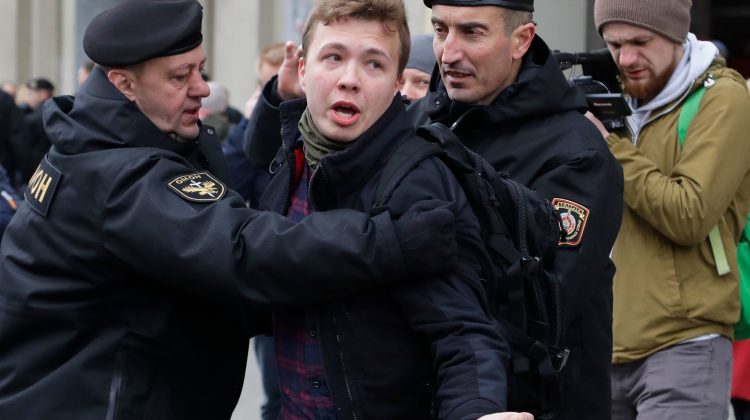 WASHINGTON – The Biden administration slapped a slew of sanctions against Belarus on Monday amid Western fury over the forced diversion of a Ryanair flight to arrest an opposition journalist.

Last month, a passenger plane flying from Greece to Lithuania was suddenly diverted to Minsk, the capital of Belarus. The Ryanair flight was escorted to Minsk by a Soviet-era MiG-29 fighter jet. Upon landing, authorities arrested opposition journalist Roman Protasevich.

The extraordinary diversion of a commercial airliner was described by some European Union leaders as a “hijacking.” The 27-nation bloc swiftly imposed sanctions against Belarus that included banning its airlines from using airspace and airports within the European Union.

The State Department has now followed suit, imposing sanctions on 46 Belarusian officials for their involvement in the arrest of Protasevich. In addition, Treasury announced sanctions on 16 individuals and five entities.

“These steps are also in response to the continuing repression in Belarus, including attacks on human rights, democratic processes, and fundamental freedoms,” Secretary of State Antony Blinken wrote in a Monday statement, adding that the sanctions were aligned with Canada, the European Union and the United Kingdom.

“The persons designated today have harmed the people of Belarus through their activities surrounding the fraudulent August 9, 2020, presidential election in Belarus and the ensuing brutal crackdown on protesters, journalists, members of the opposition, and civil society,” Treasury wrote in a statement.

Members of the Belarus diaspora and Ukrainian activists burn white and red smoke grenades during a rally in support of Belarus people protesting vote rigging in the presidential election, outside the Belarusian embassy in Kiev on August 13, 2020.

Those sanctioned by the United States on Monday include some of Lukashenko’s closest associates: his press secretary Natallia Eismant and former chief of staff Natallia Kachanava who currently serves as his presidential envoy to Minsk, Mikalai Karpiankou, Belarus’ Deputy Minister of Internal Affairs and the current commander of the Belarusian police force and Belarus’ prosecutor-general Andrei Shved.

The U.S. also imposed sanctions on the State Security Committee of the Republic of Belarus, also known as the Belarusian KGB.

“The Belarusian KGB has detained, intimidated, and otherwise pressured the opposition, to include Pratasevich,” Treasury wrote in a statement, adding that the organization upped its offenses following the fraudulent 2020 election of Lukashenko.

Treasury also sanctioned the Internal Troops of the Ministry of Internal Affairs of the Republic of Belarus, a Belarusian police force, for the violent suppression of peaceful protesters since the 2020 presidential election.

The sanctions against Belarus, a Russian ally, come on the heels of President Joe Biden’s first face-to-face meeting with his Russian counterpart in Switzerland, where the two agreed to resume nuclear talks and return their ambassadors to their foreign posts.

“We are preparing another package of sanctions to apply in this case,” Sullivan said on CNN’s “State of the Union” Sunday program. “It will come as soon as we have developed the packages to ensure that we are getting the right targets,” he added.

Concern over Navalny’s imprisonment and worsening health condition is the latest drumbeat in the already tense relations between Moscow and the West.