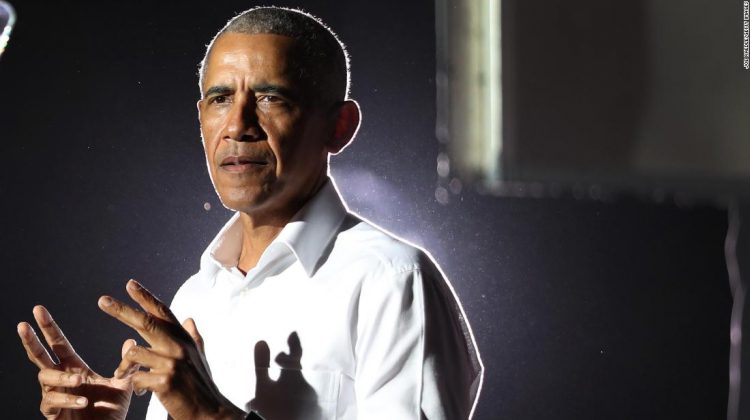 During a virtual fundraiser for the National Democratic Redistricting Committee with former Attorney General Eric Holder and House Speaker Nancy Pelosi, Obama said there have been strategies over the last several years to reduce the impact of everyone having the right to vote, including gerrymandering and “straightforward efforts” by state legislatures to suppress and discourage voting.

“If we don’t stop these kinds of efforts now, what we are going to see is more and more contested elections, contested not in the sense of healthy competition but contested in terms of who wins, who loses. We are going to see a further delegitimizing of our democracy,” he said.

Obama also said that former President Donald Trump during the 2020 election had violated a “core tenet that we count the votes and then declare a winner,” adding that people saw him “fabricate and make up a whole bunch of hooey.”

“And rather than supporting the secretary of state of Georgia or the, you know, commission in, you know, Arizona that had done the counting and performed their duties properly, et cetera, what you saw was Republican elected officials all side with the President out of fear, I guess, leave many of these folks who were Republicans themselves and were just doing their jobs hanging out to dry,” he continued.

The 44th President’s remarks come as GOP-led state legislatures across the US, including Georgia, enact restrictive voting laws and days after US Senate Republicans blocked the path forward on a sweeping federal elections bill.
Fourteen states have enacted more than 20 new laws restricting voting this year, according to the Brennan Center for Justice at New York University.
The Justice Department on Friday sued the Peach State over its new voting restrictions and announced a task force to address the rise in threats against election officials. Attorney General Merrick Garland said the Justice Department will decide whether to file more federal civil lawsuits against states that have passed restrictive voting laws.