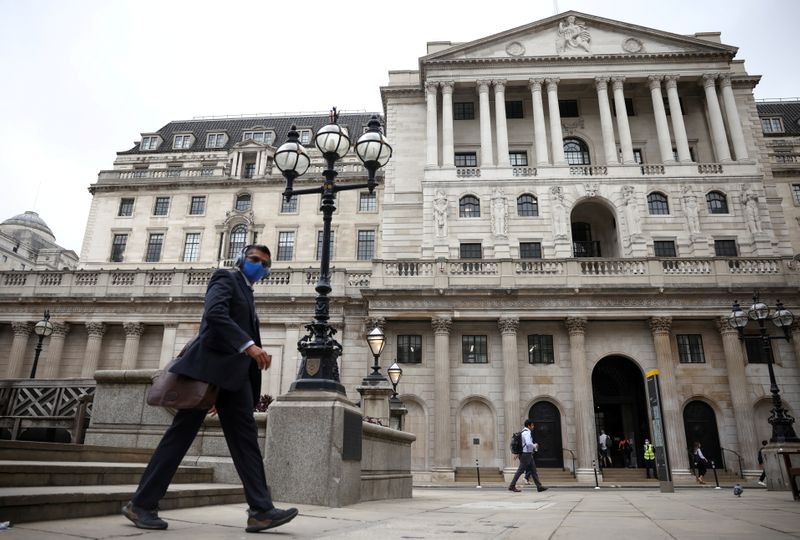 © Reuters. FILE PHOTO: A person walks past the Bank of England in the City of London financial district, in London, Britain, June 11, 2021. REUTERS/Henry Nicholls

Investors will be keen to see if more Monetary Policy Committee (MPC) members join external member Michael Saunders who voted in August to halt the current year-long programme of asset purchases, which the Bank of England committed to last November.

The BoE is ahead of other major central banks in planning to stop quantitative easing by the end of this year, and half its policymakers judged in August that some preconditions for an interest rate rise had already been met.

Late on Thursday, the U.S. Federal Reserve cleared the way to reduce its monthly bond purchases and signalled interest rate increases may follow more sooner than expected, with half of its policymakers projecting borrowing costs would rise in 2022.

In August the BoE revised up its forecast for inflation at the end of this year to 4%, reflecting higher energy prices and post-COVID-19 bottlenecks which have intensified this month.

prices have surged across Europe in recent weeks, with knock-on impacts on household energy bills, industrial chemicals and even food supplies.

Key for the timing of policy tightening is whether the BoE starts to doubt that these price rises are temporary.

A particular concern is if rising inflation pushes up longer-term inflation expectations among the general public, leading to firms and workers factoring above-target inflation into future pricing decisions and wage demands.

A monthly survey from Citi on Tuesday showed the sharpest monthly rise in year-ahead inflation expectations in more than 15 years after August consumer price inflation hit a nine-year high of 3.2%.

“This print could tilt the balance of risks to the hawkish side for the MPC meeting,” Citi economists said. “More may join Michael Saunders in voting for an early end to asset purchases, and even dissent on Bank Rate cannot be ruled out.”

Interest rate futures currently price in a more than 60% chance that the BoE will raise interest rates to 0.25% from 0.1% in February 2022, followed by another rate rise to 0.5% by the end of the year.

Most economists think the BoE will wait longer and raise rates only once next year.

While the BoE expects Britain’s economy will regain its pre-COVID-19 size in the final quarter of this year, a surge in coronavirus cases in July caused growth to slow to a crawl and business surveys suggest momentum has been hard to regain.

Moreover, furlough support payments for over a million workers end this month, as does a temporary increase in other welfare payments, squeezing households at a time when inflation is pushing up the cost of essentials.