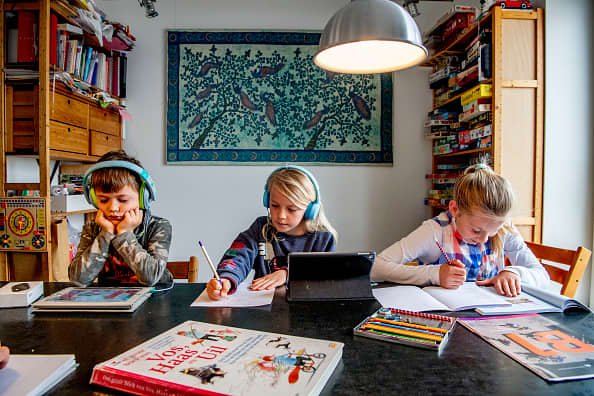 School children in the Netherlands doing homework at home during the coronavirus crisis.

LONDON — SoftBank, Tencent and other leading investors are betting that the next big online education company will come out of Europe.

Vienna-based online tutoring start-up GoStudent said Tuesday that it raised 205 million euros ($244 million) in a bumper investment round that values the five-year-old firm at 1.4 billion euros, or about $1.67 billion.

According to CB Insights data, that means GoStudent is Europe’s first education technology — or edtech — unicorn, a start-up with a valuation of at least $1 billion. Though Norwegian rival Kahoot hit a billion-dollar valuation last year, it doesn’t technically count as it has been publicly listed since October 2019.

GoStudent was founded in 2016 by Austrian entrepreneur Felix Ohswald, who was inspired by practical math lessons from his grandfather before he even started school.

“He had this ability to teach you that stuff in a way that was very applicable,” Ohswald told CNBC, referring to his grandfather.

“One of the biggest problems in education is lack of access to great teachers,” he added.

GoStudent is an online service that connects students between the ages of six to 19 with private tutors. The company sells monthly tutoring subscriptions to parents, taking a cut from the tutors’ earnings as commission. GoStudent session prices range from 17.50 euros to 26.90 euros — between $20 to $32 — per month.

Ohswald, who completed his bachelor’s degree in math at the age of 18, said his firm is now selling 400,000 sessions a month, and sales have grown 700% over the last 12 months. GoStudent aims to double the number of monthly sessions on its platform to 800,000 by the end of 2021.

The mindset for online teaching as a whole completely changed.

Edtech companies like Coursera, 2U and Chegg boomed during the coronavirus pandemic as lockdown restrictions pushed 1.5 billion children around the world into remote learning. However, Ohswalt said Covid-19 school closures actually led to a reduction in demand for “supplemental” teaching services like GoStudent.

“On the other hand, the mindset for online teaching as a whole completely changed,” he added. “Suddenly, parents extremely skeptical about online learning before the pandemic now at least give it a chance and try it out.”

GoStudent says it vets all tutors on its website, with Ohswalt describing the application process as “pretty tough.” Just 8% of math tutor applicants succeed in being accepted to run lessons on GoStudent, he said.

But GoStudent was embroiled in controversy earlier this year after it emerged that a 60-year-old who was banned from teaching, because he sold naked pictures of himself to a teenager, was providing lessons on the platform. GoStudent said the teacher gave a fake name and was removed from its service after the company became aware.

Having raised a total of 291 million euros to date, GoStudent plans to expand beyond Europe — where it has a presence in 15 countries — to other markets like Mexico and Canada by the summer.

Asia is another potential geographic expansion target for the firm, Ohswald said, highlighting the Philippines, Indonesia and Malaysia as “interesting” opportunities. However, he ruled out an expansion into countries like China and India, which are already home to established e-learning players such as Yuanfudao and Byju’s.

GoStudent said it would ramp up hiring and aimed to nearly double its global workforce from 600 employees to 1,000 by year-end. Part of the funding may also be used for acquisitions, the firm said.