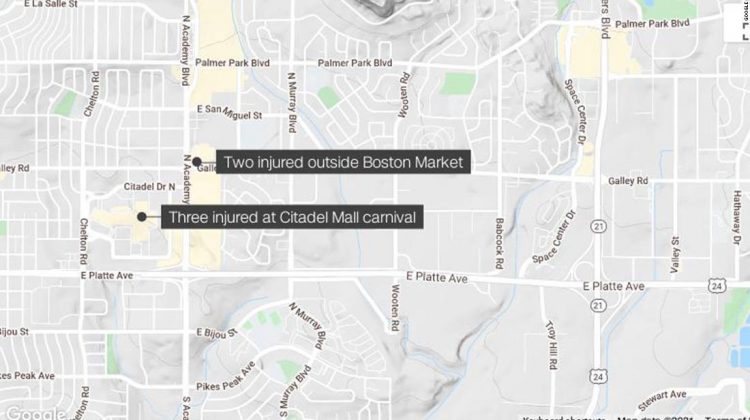 The first shooting involved “a disturbance between two known groups” at a mall carnival, where three juveniles were transported to a hospital, the Colorado Springs Police Department said in a series of tweets.

Officers responded to a report of shots fired at the Citadel Mall event about 9 p.m., according to police.

Police came upon two injured juveniles who were taken to a hospital.

Officers later learned that a third injured juvenile was transported to a hospital by family members, the posts said.

Police in the posts described their injuries as “serious but non life-threatening.”

While investigating the first shooting, officers received another report of gunfire at a Boston Market across the street, according to police.

The second shooting happened about 40 minutes after the first report of gunfire, CNN affiliate KKTV reported.

A preliminary investigation found the second shooting occurred when “a suspect confronted three individuals in a parked car,” police said.

Two people in the car were driven to a hospital after suffering gunshot wounds, according to the posts.

Investigators believe the shootings are isolated and appealed to the public for information, police said.

No additional information was provided on suspects or possible motives in the shootings.