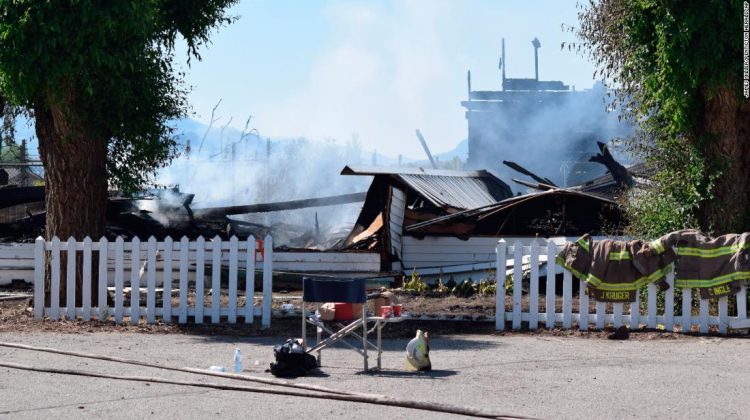 They are the latest in a string of recent events affecting the country’s Indigenous communities. The churches were destroyed as Canada confronts its history of systemic abuse of Indigenous communities with the recent discoveries of hundreds of human remains at the sites of two former boarding schools, which were operated by Catholic religious groups.

Authorities described the fires on Saturday and two other fires that took place last week as suspicious, Bayda said in a statement. The investigations are ongoing with no arrests or charges, police said.

The other two fires took place in the southern Okanagan region on June 21, which is National Indigenous Peoples Day in Canada. An officer with the Penticton RCMP was patrolling near Penticton Indian Band land at 1:22 a.m. when he spotted flames coming from the Sacred Heart Church, police said in a statement.

About two hours later, police said they received a call about another fire at St. Gregory’s Church on the Osoyoos Indian Band land, which is about 25 miles away.

Both churches were burned to the ground and investigators are describing the fires as suspicious, police said.

When Father Sylvester Obi Ibekwe heard about the fire at Sacred Heart Church, he quickly drove there and realized the historic building was completely destroyed.

“The Church is gone. All I could see were ashes, ruins, rubbles. How could that be? What happened? What can I do now? I felt helpless and powerless,” he wrote in a message to parishioners. Ibekwe is the parish priest of the Catholic Parishes of Penticton, which includes Sacred Heart Church.

Bishop Gregory J Bittman of the Roman Catholic Diocese of Nelson said he was saddened by the fires that destroyed the churches on June 21.

“For many years, our priests have been welcomed to minister in these mission churches and it is our hope that this ministry will continue. Our thoughts and prayers are with everyone affected by the fires and we are grateful that no one died or was physically injured,” Bittman said in a statement.

CNN has reached out to the Canadian Conference of Catholic Bishops and the Archdiocese of Vancouver for comment.

While authorities have not discussed a possible motive for the fires, the Lower Similkameen Indian Band’s chief and council said in a statement about the fires on Saturday that they understand the “grief and rage” felt by people across Indian country in the wake of the discovery of remains of hundreds of children on the grounds of a former school in the southern interior of British Columbia.

“This is a symptom of the intergenerational trauma our survivors and intergenerational descendants are experiencing, there are supports to help deal with these emotions in a more healing way,” the Lower Similkameen Indian Band’s leaders said.

In their statement, the LSIB leaders said they were shocked, angered and in disbelief after discovering the church was destroyed but noted that “it is not our place to say who to worship and what historical relevance it has to our community members, we are all free to choose and it is our place as a community to support that freedom.”

Indigenous leaders and residential school survivors in Canada have been calling on officials to investigate every former residential school in the country since the remains of more than 200 children were found at the former Kamloops Indian Residential School in late May.

The Kamloops Indian Residential school was one of the largest in Canada and operated from the late 19th century to the late 1970s. It was opened and run by the Catholic Church until the federal government took it over in the late 1960s.

Last week, the Cowessess First Nation in Saskatchewan announced that at least 750 unmarked graves were found on the grounds of the former Marieval Indian Residential School. Indigenous leaders began radar searching the school grounds on the days after the discovery at the Kamloops school.

At least 130 schools were in operation across Canada between the late 19th century and 1996, many run by the Catholic church or the federal government.

Two Catholic religious groups, known as the Oblates, who were involved in operating many of the residential schools throughout Canada, including those in Marieval and Kamloops, have said they intend to disclose all historical documents about their involvement.

“We remain deeply sorry for our involvement in residential schools and the harms they brought to Indigenous peoples and communities,” groups said in a statement.

Cowessess Chief Cadmus Delorme told reporters on Friday that it was time for the Catholic Church, specifically Pope Francis, to apologize to Indigenous communities saying, “an apology is one stage of many in the healing journey.”

Earlier this month, the Canadian Conference of Catholic Bishops said they have been planning a meeting between the Pope and a group of Indigenous people, including elders, residential school survivors and youth from across Canada.
“The event will likewise provide Pope Francis with a unique opportunity to hear directly from Indigenous Peoples, express his heartfelt closeness, address the impact of colonization and the implication of the Church in the residential schools, so as to respond to the suffering of Indigenous Peoples and the ongoing effects of intergenerational trauma,” the CCCB said in a statement.

The meeting had been delayed due to the Covid-19 pandemic but it could take place by the end of 2021, CCBD said.