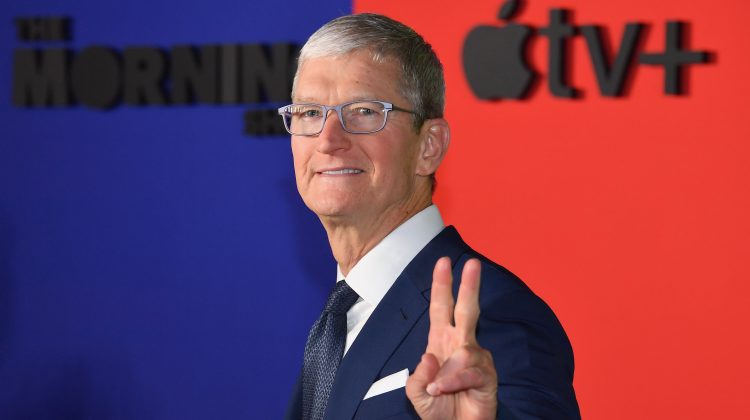 The training wheels are about to come off for Apple TV+, the company’s streaming video service.

Apple TV+ costs $4.99 per month. It’s also bundled with other Apple services like Music and iCloud in packages called Apple One starting at $14.95 per month. But a lot of subscribers aren’t paying.

Apple gave away a huge number of Apple TV+ of subscriptions to get the service off the ground. Starting in September 2019, anyone who bought an Apple product — an iPhone, iPad, Mac, Apple TV, or Apple Watch — got one year of Apple TV+ for free. During the pandemic, Apple extended the offer twice for people whose trial periods were about to expire.

The majority of Apple TV+ subscribers are still on the promotional offer, with 62% of current subscribers accessing Apple TV+ through a promotional package, according to survey data by Moffatt Nathanson published in January. Apple hasn’t said how many subscribers the service has, but it has sold hundreds of millions of iPhones and other gadgets since late 2019.

Now Apple is starting to wean Apple TV+ subscribers off the free plan.

On July 1, people who buy Apple products will be eligible for only 3 months of free Apple TV+, instead of a year, and people who already cashed on the trial can’t get it again. Also during July, the first subscribers to activate the promotional offer will start to be automatically billed for the service after having access to its shows for nearly 21 months for free.

This creates a huge test for Apple.

Will the millions of users currently on a free trial end up signing up for the $5 per month service or an Apple bundle because they can’t go without Apple’s shows? Or will they cancel?

Others may simply forget that they were on the trial and not immediately notice the new charges.

Apple reducing its reliance on free trials for Apple TV+ is a “critical point” for the service, said Parks Associates analyst Steve Cason, who follows the streaming industry.

“For newer or smaller services, partnerships and promotions are an invaluable customer acquisition tool,” Cason said. “A large percentage of folks follow through, they truly love the service and continue it. Or they forget they gave the service their credit card.”

Apple TV+ has always had fewer hours of movies and TV compared to other streaming services, which may be a reason why it debuted with a lower price, versus to $8 per month for Disney+ or $8.99 for a standard Netflix plan.

When Apple TV+ was launched in November 2019, it had nine original, Apple-backed shows and movies. Now it has around 87 original TV shows, movies and documentaries. That’s nowhere near what other services offer.

Hulu, for example, has thousands of shows, according to Reelgood data, many of which already have large fanbases because they were broadcast on TV. Netflix and Amazon Prime Video both have more than 1,000 licensed and original shows for customers to watch.

Apple has not licensed any non-exclusive shows for its service, and instead is only offering shows it financially backed. It hasn’t spent to buy media companies to fill out its back catalog, unlike Amazon, which recently agreed to acquire MGM Studios.

Most of Apple’s shows star big-named producers and actors, such as Oprah and Steven Spielberg. However, talent is not exclusively tied to the company. Oprah’s biggest interview in recent memory, with Prince Harry, was broadcast on CBS. Steven Spielberg recently signed a deal with Netflix, too.

Streaming ratings are notoriously secretive, and Apple’s never revealed how many viewers any of its shows have.

When Apple executives are asked about the success of its content, they point to award nominations. In a press release last week, Apple said that its original shows have received 112 awards and 389 nominations, including Critics Choice awards, Golden Globes, and Oscars.

“No matter what device you enjoy it from, it is a milestone period for Apple TV+, racking up many new award nominations and wins, including its first Oscar nominations,” Apple CEO Tim Cook said on a call with analysts in April.

Cook went on to praise one show in particular, “Ted Lasso,” which looks like Apple TV+’s first big hit. The breezy comedy about an American soccer coach, which was based on an NBC advertisement poking fun at Americans’ ignorance about soccer, found a fanbase with its low-stakes banter.

“Ted Lasso” season 2 will premier on July 23 and Apple will release new episodes weekly with an aim to get current subscribers on the trial hooked and potentially find new subscribers.

A promotional email sent to subscribers this week highlights “Ted Lasso” in addition to a second season of “The Morning Show” starring Jennifer Aniston premiering in September. The email also promoted shows that have yet to premier, such as a comedy starring Will Ferrell and Paul Rudd called “The Shrink Next Door” and the sci-fi series “Foundation” based on Issac Asimov’s books.

Still, “Ted Lasso” is a 30-minute comedy with only 10 episodes currently available, and overall, Apple’s library of content still trails far behind rivals.

“Apple’s not in a position of strength here,” Moffett Nathanson’s Michael Nathanson said. “Although they have some excellent shows, they lack the scale of new releases, tentpole titles and a deep library to really create a large profitable business at this point.”

Part of a whole

Apple’s The Morning Show” will return for a second season on Friday, September 17, 2021.

It’s hard to figure out how Apple TV+ stacks up to Disney or Netflix in terms of subscribers because Apple doesn’t release stats.

Analysts are reluctant to offer estimates, but based on the number of smartphones Apple sells per year, tens of millions of people could have taken the promotional offer for Apple TV. Apple sold 206 million iPhones globally in 2020, according to an IDC estimate, and that doesn’t include the other Apple products that come with a free trial.

The percent of subscribers who could end up churning is also foggy. A Moffett Nathanson analysis of survey data suggests 29% percent of Apple TV+ subscribers don’t plan to renew and 41% aren’t sure yet. Only 30% said they planned to continue subscribing to Apple TV+.

But Apple never said it planned to take on Netflix, Cason said, so the total number of subscribers may not be that important to the company. He thinks that Apple TV+ is another one of several services designed to get users hooked on iPhones and Apple services, in line with Apple’s overall corporate strategy.

“Apple wants to get you into their ecosystem through a device purchase, and once you get in there, they go, ‘We’ll give you Apple TV+. We also have Apple Music, podcasts, news, fitness, you can bundle them or you buy them separate,'” Cason said.

In fact, that’s how Apple thinks about its subscriber numbers. It said in April that it has 660 million paid subscribers across its services — but that also includes anyone who’s subscribed to an app through App Store billing.

Apple TV+ gives the company commercial-free content it can use to promote new audio and visual standards it builds into its products. For example, when Apple TV+ shows first debuted, they supported a Dolby HDR standard that produced better image quality when viewed through a supported Apple player. The next year, Apple announced that iPhones can film video using Dolby Vision HDR.

More recently, Apple launched a feature called spatial audio that works like advanced surround sound when listening on certain Apple headphones. Apple TV+ shows and movies support spatial audio, giving Apple customers the ability to watch a show in it without the company making sure that supported content is available from rivals.